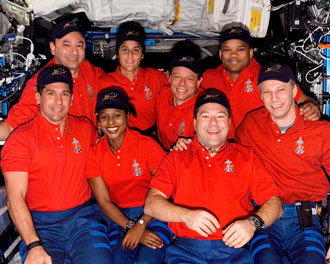 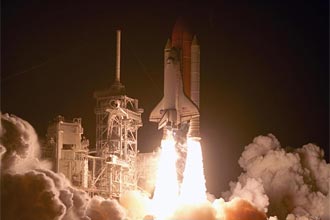 Image above: Space Shuttle Discovery seems to be standing on the fiery columns erupting from the solid rocket boosters as it lifts off Launch Pad 39B on mission STS-116. Image credit: Photo credit: NASA/Regina Mitchell-Ryall & Tim Powers
+ View High-Res

NASA managers postponed the Dec. 7 space shuttle launch attempt until Dec. 9 because of low cloud cover. The interim day's weather was not expected to be favorable for a launch attempt.

The Space Shuttle Discovery and its seven-member crew lifted off Dec. 9 from NASA's Kennedy Space Center in Florida on one of the most complex missions ever to the International Space Station. 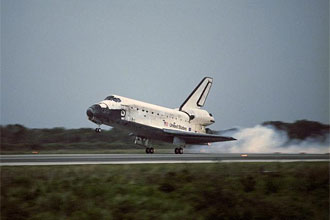 The original landing date of Dec. 21 was postponed due to the addition of a fourth spacewalk. Inclement weather at KSC caused some concern and the first landing opportunity at 3:56 p.m. EST was waved off. The first chance for landing at Edwards Air Force Base in California was passed due to gusty winds. Weather conditions at KSC took a dramatic turn for the better and landing proceeded on the second opportunity. Returning with the crew was astronaut Thomas Reiter after his six-month tenure as part of the Expedition 14 crew on the space station. He was replaced by Flight Engineer Suni Williams.

Docking with the International Space Station occurred at 4:12 p.m. Dec. 11. An impromptu wing inspection was called for after a minor vibration reading on the port wing sensor. The imagery analysis team determined the shuttle's heat shield could support a safe return to Earth and further inspection was not needed.

Three spacewalks (EVAs) were planned to unberth the P5 truss from Discovery's payload bay, install it on the station's main truss and rewire the station's electrical system to its permanent power grid.

With the fourth EVA, Mission Specialist Robert Curbeam set a record for the most spacewalks during a shuttle mission. He has a total of 45 hours, 34 minutes of spacewalking time.

The total time spent on spacewalks on this mission was 25 hours, 45 minutes.

Before undocking from the station, Mission Specialist Joan Higginbotham and her cargo team transferred more than two tons of food, water and equipment for the Expediction 14 crew. They also filled Discovery's pressurized cargo carrier with equipment and experiment samples for return to Earth.

The crew wrapped up eight days of docked operations, separating from the space station on Dec. 19. On Dec. 20, they inspected the heat shield for possible micrometeoroid debris damage using the sensor-equipped orbiter boom sensor system unfolded from the payload bay. They also deployed small technology demonstration satellites, known as MEPSI or Micro-Electromechanical System-based PICOSAT Inspector, for the U.S. Department of Defense's Space Test Program, as well as student-experiment scientific satellites and the Atmospheric Neutral Density Experiment (ANDE) that will measure the density and composition of the low-Earth-orbit atmosphere while tracked from the ground.

On Dec. 21, Mission Control confirmed the shuttle's heat shield was in good shape and the crew and orbiter could plan for a safe landing.
NASA's John F. Kennedy Space Center