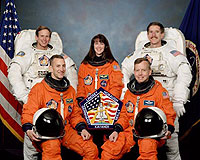 After docking with the ISS on July 13, both Atlantis and ISS crews reviewed EVA procedures. In a series of three spacewalks, the joint airlock module was attached to the Unity Node and high-pressure gas tanks attached to the airlock, christened "Quest." The crews tested nitrogen and oxygen lines for use on future shuttle missions and installed valves to connect Quest to the ISS environmental control system. they also installed a computer to run the airlock's systems. Air bubbles in a coolant line caused a water spill -- cleanup caused a task to be postponed to another day. Astronauts replaced a leaky air circulation valve and moved the hatch for the airlock into position between the Equipment Lock and the Crew Lock.

Kavandi, Gernhardt and Reilly transferred items between the shuttle and station, storing equipment and space suits in the airlock.

Both station and shuttle crews checked out and activated the new Quest airlock, conducting a dry run before the inaugural event.

EVA No. 1: 5 hours, 59 minutes -- On July 15 Spacewalkers Michael Gernhardt and James Reilly removed an insulating cover from the airlock's berthing mechanism and covers from its seals plus installed bars on the airlock that are attachment points for four high-pressure gas tanks. Expedition 2 crew member Susan Helms then lifted the airlock out of Atlantis' payload bay using the Canadarm2 and maneuvered it to the berthing port on the Unity Node. Gernhardt and Reilly provided additional guidance from outside the ISS.

Gernhardt then attached heating cables from the ISS to the airlock and Reilly positioned foot restraints needed for the second EVA.

On July 18, Gernhardt and Reilly installed three tank assemblies for the joint airlock with the help from both the shuttle's Canadarm and the station's Canadaarm2.

On July 21, Gernhardt and Reily exited the new airlock and, with support from the station and shuttle robotic arms, attached a nitrogen supply tank to the airlock's shell. This completed installation of two nitrogen and two oxygen tanks that will be used to pressurize the airlock and resupply space suits. The astronauts also moved hand-over-hand up the station's solar array truss to take a look at the gimbal assembly mechanism that allows the arrays to swivel with the Sun.