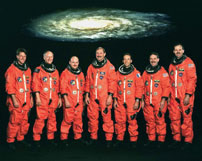 Discovery faced nine delays and scrubs, some mechanical and some due to the weather, before launching successfully.

Before facing those postponements, the third Hubble space shuttle servicing mission had been advanced in the mission schedule. The servicing mission was originally scheduled for June 2000, but when the third of Hubble's six gyroscopes failed, the mission was split into two separate missions. The first mission, STS-103, was scheduled for Oct. 14 with the second mission to follow in 2001. (Hubble needs at least three of its six gyroscopes to be functioning to enable the telescope to point precisely at distant astronomical targets for scientific observation.)

In mid-August shuttle managers decided to extend wiring inspections and maintenance across the shuttle fleet after wiring problems were detected aboard Columbia. That orbiter was inspected and determined to have wiring problems after an irregularity occurred during the launch of STS-93 on July 23, 1999. Following inspections of Discovery, a new target launch date of no earlier than Oct. 28 was announced (first launch delay).

Because of the amount of wiring repairs needed, the planning date was shifted to no earlier than Nov. 19 (second delay). Shuttle managers decided to preserve the option to launch either STS-103 or STS-99, the Space Radar Topography Mission, first.

On Nov. 13, a fourth gyroscope on Hubble failed and the observatory was put into "safe mode," a state of dormancy in which the telescope aims itself constantly at the sun to provide electrical power to its systems.

As repairs to Discovery came to a close, launch was targeted for Dec. 2. The launched date was put under review after a half-inch-long drill bit was discovered to be lodged in main engine No. 3. A new launch date of Dec. 6 was set (third delay). Rollout to the pad proceeded and Discovery's main engine No. 3 was replaced while the orbiter was on the pad.

After Discovery reached the pad, additional damaged wiring, which was found in an umbilical between the orbiter and the external tank, was detected and a new launch date of Dec. 9 was set to allow for repair and testing (fourth delay). The launch was then reset to Dec. 11 (fifth delay). The new target date allowed KSC workers to observe the Thanksgiving holiday.

The mission was again put on hold after a dented main propulsion system line which carries liquid hydrogen fuel for the shuttle main engines was found during closeout inspections of Discovery's engine compartment. A new target date of no earlier than December 16 was set (sixth delay).

By Dec. 13, workers at Launch Pad 39B had completed inspections and leak checks on shuttle Discovery's replaced liquid hydrogen recirculation line that was replaced and the target date confirmed to be Dec. 16.

On Tuesday, Dec. 14, 1999, the launch countdown for STS-103 began on schedule at 1:30 a.m. Later that day during routine inspections of the external tank's pressure lines, a suspect weld was detected. To ensure that the proper welding materials and procedures were used, a thorough review of process and paperwork used during the fabrication of the lines was conducted. It was determined that the same manufacturer performed welds on the 17-inch propellant feed lines and struts in the AFT engine compartment when Discovery was constructed. A 24-hour delay was called to give the shuttle team time to review the manufacturing inspection records for those lines as well. It was determined the welds were correctly made and the launch was rescheduled to Dec. 17 (seventh delay).

On Dec. 17, with an 80 percent chance of unfavorable weather, external tank cyrogenic loading was started at 11:29 a.m. EST. Tanking operations were complete at 3:00 p.m. EST. The launch countdown proceeded to the T-minus 9 minute mark and held due to weather constraints. At 8:52 p.m. EST the launch director scrubbed the launch due to violations of weather launch commit criteria and the launch was rescheduled to Dec. 18 (eighth delay).

Due to the prediction of poor weather on Dec. 18, the mission management team decided to preserve a launch option and rescheduled Discovery's launch from Dec. 18 to Dec. 19 at 7:50 p.m. EST (ninth delay). On Dec. 19, 1999, the weather outlook was favorable, so shuttle managers decided to proceed with the STS-103 launch countdown. The shuttle launched on time at the beginning of the 42 minute window. To ensure that all flight and ground systems were secured for the transition to Year 2000, the mission was shortened from 10 days to 8 days.

STS-103 restored the Hubble Space Telescope to working order and upgraded some of its systems, allowing the decade-old observatory to get ready to begin its second scheduled decade of astronomical observations.

The first few days of the 8-day mission, the crew prepared for the rendezvous and capture of the Hubble Space Telescope and the three maintenance spacewalks to follow. After a 30-orbit chase Commander Brown and Kelly maneuvered the orbiter to a point directly beneath Hubble, then moved upward toward it. Mission Specialist Clervoy grappled Hubble using the orbiter's robotic arm and placed it on the Flight Support System in the rear of Discovery's cargo bay.

EVA No. 1: Mission Specialists Steven Smith and John Grunsfeld conducted the mission's first spacewalk. The two made numerous repairs, including replacing the telescope's three Rate Sensor Units -- each containing two gyroscopes. They also installed six Voltage/Temperature Improvement Kits between Hubble's solar panels and its six 10-year-old batteries. The kits, the size of cell telephones, were designed to prevent any overheating or overcharging of those batteries. A few minor objectives were left undone, such as taking close-up photos of the Voltage/Temperature Improvement Kits. The 8-hour, 15-minute space walk was second to the longest space walk from Endeavour on STS-49 in May 1992. A few minor problems helped account for the length of the space walk. The astronauts had difficulty in removing one of the old RSUs, and opening valves and removing caps on the Near Infrared Camera and Multi-Object Spectrometer. The tasks were eventually completed.

EVA No. 2: During the mission's second space walk, Mission Specialists Michael Foale and Claude Nicollier installed a new advanced computer -- 20 times faster than Hubble's old one -- and a new, 550-pound fine guidance sensor. This 8-hour, 10 minute space walk was the third longest in history. With all major activities accomplished, controllers reported that power was reaching both of the new pieces of equipment. "The brains of Hubble have been replaced," said Mission Specialist Grunsfeld. About 30 minutes later, Hubble began thinking with those new brains.

EVA No. 3: Smith and Grunsfeld again teamed up to make the mission's third and final space walk. Like the first two, it also lasted more than 8 hours, making it the fourth longest in history. The team installed a transmitter that sends scientific data from Hubble to the ground. It replaced one that failed in 1998. The astronauts used special tools developed for the task because transmitters, usually very reliable, were not designed to be replaced in orbit. Smith and Grunsfeld also installed a solid state digital recorder, replacing an older mechanical reel-to-reel recorder.

Hubble was released from Discovery's cargo bay on Christmas Day.

Mission STS-103 is the third time in the U.S. Space Program that a crew has spent Christmas in space.