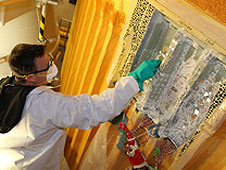 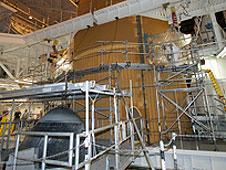 Space shuttle Discovery remains in the Vehicle Assembly Building at NASA's Kennedy Space Center in Florida as modifications and repairs are made to the external fuel tank's support beams known as "stringers." Additional support structures called radius blocks are being added to 94 stringers, meaning the entire circumference of the external tank will be strengthened by the time all the repairs and modifications are finished.

"The teams have done a tremendous job of staying focused and working this problem," said Bill Gerstenmaier, NASA's associate administrator for Space Operations. "There's been lots of ups and downs but the team has really stayed focused."

Meeting Monday, space shuttle management approved the modifications using the radius blocks. The repairs to the cracked stringers themselves have been finished.

"It's been a long road," said John Shannon, Space Shuttle Program manager. "I'm very confident we have it finally figured out and we have a fix. We're going to fly with a lot of confidence in this tank."

The radius blocks are 6-inch-long aluminum pieces that are only about a fifth of an inch thick. However, that is thick enough to keep the stringers flat as the liquid oxygen tank shrinks when the super-cold propellant is loaded before launch, Shannon said.

Without the radius blocks, the end of the stringers were bending in slightly as the tank contracted and the stress was causing the cracks to develop, Shannon said.

"It's a very simple, elegant fix to the problem," Shannon said.

The radius block modifications are not thought necessary for the tank to be used on STS-134 because it was made with a different batch of materials. However, the modifications will be made for the third of the three available tanks, Shannon said. That tank is set to fly on STS-135 later this year.

Discovery will not launch on the STS-133 mission before Feb. 24, but shuttle managers have not yet chosen a target date for the mission. The schedule depends in part on traffic at the International Space Station during that time frame. A European cargo spacecraft, ATV-2, is scheduled to launch to the station Feb. 15 carrying supplies and equipment.

The stringers became the focus of launch preparation when cracks were discovered in two of them following fueling operations during a Nov. 5 launch attempt. That attempt was scrubbed because of an unrelated problem with the ground umbilical carrier plate.

Since then, the shuttle's intertank region, the ribbed portion that connects the liquid oxygen and liquid hydrogen tanks, were surveyed with two types of powerful X-ray devices at the launch pad. The launch team also performed a fueling test Dec. 17, with 89 temperature and motion sensors on parts of the tank's aluminum skin.

Discovery was rolled back to the VAB on Dec. 22 for more inspections and scans of areas that were not accessible at the pad. Those scans showed four more small cracks in three stringers on the portion of the intertank opposite Discovery.

While the scans and repairs took place at Kennedy, teams of engineers and managers at NASA's Marshall Space Flight Center in Alabama and the Michoud Assembly Facility in Louisiana have been analyzing the results and testing theories in lab settings to find a root cause and prove the fixes will work.

For example, the radius blocks are a known and practiced structural augmentation technique used on previous external tanks.

Discovery and its six-member astronaut crew will deliver experiments, supplies and equipment to the station during the 11-day mission, along with an experimental robotic crew member called "Robonaut 2."