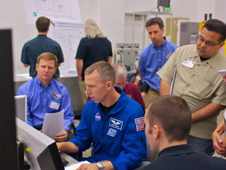 Though the next shuttle launch marks the end of an era for Endeavour, it will mark the beginning for a new NASA rendezvous and docking sensor technology designed to support future crew and uncrewed spacecraft.

A state-of-the-art relative navigation system will be demonstrated on the STS-134 mission to the International Space Station called the Sensor Test for Orion Relative Navigation Risk Mitigation or STORRM. The goal of STORRM is to validate a new relative navigation sensor based on advanced laser and detector technology that will make docking and undocking to the International Space Station and other spacecraft easier and safer. The demonstration is a test-run of the technology, and the STS-134 crew and engineers in mission control will monitor the flight data throughout the mission with specialized STORRM software.

The VNS is an eye-safe LIDAR system that provides an image of the target – in this case, the International Space Station – along with range, bearing, alignment, and orientation data to precise accuracies. The docking camera is designed to provide high-resolution color live imagery. Both these sensors will provide real-time three-dimensional images to the crew with a resolution 16 times higher than the current shuttle sensors and was originally designed to support Orion rendezvous and dockings.

Much like the technology that allows automobiles to parallel-park themselves without driver assistance, the VNS and docking camera would allow the spacecraft to “park” itself. This technology also can aid in hazard avoidance, allowing for safe approach and landing on asteroids and other planetary surfaces.

So how does it work?

Toward the end of the mission, the shuttle crew will undock from the ISS and then perform an unprecedented re-rendezvous with the station on a flight path that is designed to mimic the approach of Orion or future spacecraft.

As the shuttle approaches the ISS the new sensor technology will interact with retro-reflectors that were installed during the STS-131 mission. The retro-reflectors – which serve as cooperative targets – are titanium clamping mechanisms that contain a small piece of reflective tape – similar to that on stop signs.

The eye-safe laser light will interact with the retro-reflectors sending light back toward the STORRM sensors. The system will then record the range and line-of-sight angle measurement data for evaluation and assessment post-flight.

The crew members also will be able to monitor the data through a STORRM software application on their laptop computer. All data will be collected and stored in the one terabyte of memory located in the avionics unit. In addition, screen snapshots of the data will be sent to Mission Control for the STORRM team to evaluate real time.

After working on STORRM for the past three years, NASA engineers are looking forward to the demonstration. "The STORRM team is very excited to see STS-134 launch and to support the mission,” Hu said. “The team has worked extremely hard to get STORRM flight hardware ready and look forward to gathering this critical data for NASA"

“Both the industry and NASA teams overcame significant schedule and technical challenges to deliver both the sensor and data storage flight hardware for STORRM,” added Frank Novak, STORRM project manager from NASA's Langley Research Center. “Langley designed a radiation tolerant data storage system in six months, capable of storing one terabyte of data. It was the joint efforts of the engineers from both industry and NASA that made the STORRM project a reality.”