It Only Looks Like the Original
NASA's space shuttle still appears very much the same as it did 25 years ago, when Columbia lifted off on mission STS-1 from Kennedy Space Center, Fla. But looks are quite deceiving. 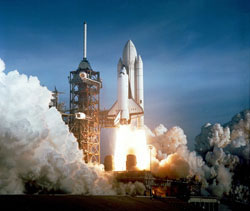 Since its inaugural mission, the shuttle has experienced significant changes over the years. With 112 successful flights and the loss of two vehicles and astronaut crews, NASA continues to add safety upgrades to the shuttles for upcoming missions to complete the International Space Station.

"The orbiter itself is a very complex vehicle, so there's always work to be done," said Stephanie Stilson, who has overseen periodic maintenance, upgrades and full systems testing on Space Shuttle Discovery since 2001. "It takes a lot of planning and coordination."

The first decade of the Space Shuttle Program followed many years of research to produce the right vehicle for the job. From 1981 to 1985, there were 24 successful flights.

During the 32 months that followed the loss of Space Shuttle Challenger in January 1986, engineers made more than 70 orbiter modifications and extensively redesigned the solid rocket boosters.

Major upgrade periods for the shuttle orbiters have also been scheduled at regular intervals to improve safety and performance, adding new technology and allowing for thorough inspections of the tiles, wiring and structural integrity of the vehicles.

In the 1990s, NASA's B-52 research flight tests led to the development of a drag chute to help the orbiter land more safely and easily. On mission STS-49, Endeavour became the first orbiter to use the chute during its landing in May 1992.

Here are just a few earlier modifications that were performed on the orbiters:
One of the most impressive changes to the orbiter was the installation of the new Multi-function Electronic Display System. The system's 11 full-color, flat-panel screens replaced dozens of outdated electromechanical cockpit dials, instruments and gauges. Atlantis was the first orbiter to receive the new "glass cockpit" during its 1998 modification period, and it was used for the first time on mission STS-101 in May 2000. 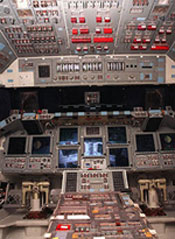 The glass cockpit's liquid-crystal displays makes it easier for astronauts to read important flight data, as light sources like the sun don't produce glare on the screens. The display allows for a clear view from positions at a wide range of angles, offers greater backup capabilities, weighs less, and uses less power than the original cockpit design.

Engineers and technicians spent about 900,000 hours performing safety enhancements on Endeavour during its major upgrade period that started in December 2003. Among the extensive improvements were the addition of the glass cockpit and a global positioning system.

When the vehicle was powered up for the first time in two years, the engineering team was understandably elated.

"The team worked tirelessly to ensure the vehicle progressed though the modification period on time and on budget," said Tassos Abadiotakis, Endeavour's flow director.

Discovery has also received more than 100 upgrades, including the glass cockpit.

One major enhancement after the Columbia accident in 2003, an orbiter boom sensor system, was installed on Discovery. Last summer, Discovery's crew used the 50-foot-long device with a camera and lasers on the end during the STS-114 mission. Discovery's robotic arm held the boom and used it to reach around the vehicle and scan the reinforced carbon-carbon surfaces to inspect the heat shield while in space.

In addition, a new digital camera was added to view the external tank during launch and sensors were placed in the leading edge of the orbiter's wings to detect changes in temperature and possible impacts from debris.

Workers have been preparing Discovery for NASA's next shuttle launch on mission, STS-121, since the shuttle's return on the STS-114 mission last August.

NASA's space shuttles have continued to evolve through hard work and sacrifice and are now in the process of fulfilling their final purpose -- completing the space station.