Sally Ride: Setting the Stage for Women in Space 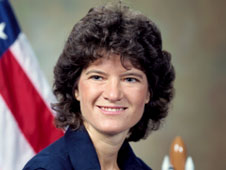 Last week, space shuttle Discovery touched down after a historic mission to the International Space Station, a flight that not only launched the largest laboratory to date, but also the 40th female NASA astronaut, Karen Nyberg.

Just eight weeks earlier, astronaut Peggy Whitson returned to Earth after a six-month stay in orbit as the first female space station commander. Women astronauts have established their place in space, but it was the flight of Sally Ride 25 years ago that paved their road to the stars.

Ride was a mission specialist on STS-7, launched June 18, 1983. The mission deployed two communications satellites and collected research on a number of scientific experiments.

“The fact that I was going to be the first American woman to go into space carried huge expectations along with it,” said Ride. “And that was made pretty clear the day that I was told I was selected as a crew. I was taken up to Chris Kraft’s office. He wanted to have a chat with me and make sure I knew what I was getting into before I went on the crew. I was so dazzled to be on the crew and go into space I remembered very little of what he said.” 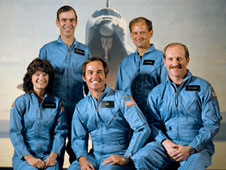 These five astronauts represent the space shuttle's first five-member crew, STS-7. Astronaut Robert L. Crippen (center, first row) is crew commander. Other crew members are astronauts Frederick H. Hauck, right, pilot; and Sally K. Ride, John M. Fabian and Norman E. Thagard, mission specialists. Credit: NASA
Ride joined NASA as part of the 1978 astronaut class, the first class to include women. Ride and five other women were selected out of 8,000 applicants, 1,500 of which were female. Twenty-nine men also were selected. The class became known as the “Thirty-Five New Guys” and reported to the Johnson Space Center the next summer to begin training. Ride would train for five years before she and three of her classmates were assigned to STS-7.

“On launch day, there was so much excitement and so much happening around us in crew quarters, even on the way to the launch pad, going up the launch pad,” Ride said. “I didn’t really think about it that much at the time… but I came to appreciate what an honor it was to be selected to be the first to get a chance to go into space.”

Following that historic flight, Ride flew on another shuttle mission, STS-41G in 1984. She was assigned to a third mission, but transitioned to a role on the Challenger accident investigation panel in January 1986. Once the investigation was completed, she served as a special assistant to the NASA administrator.

Since then, Ride has returned to academia and her passion for inspiring young people. She has written numerous books and founded Sally Ride Science, a company dedicated to supporting students and their interest in math and science.
› Back To Top