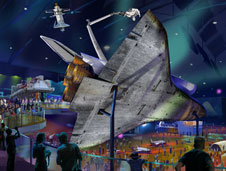 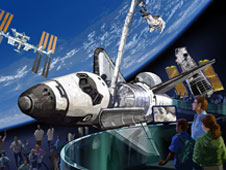 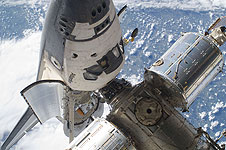 For decades, NASA has shared the excitement, emotions, dreams and remarkable feat of voyaging out beyond the reaches of Earth's gravity in the world's first reusable spacecraft. In retirement, space shuttle Atlantis will help the agency bring that story to life for generations to come from its launch site at Kennedy Space Center in Florida.

"Not only will the workers who sent it into space so many times have a chance to still see it," NASA Administrator Charlie Bolden said to cheers and applause while standing in front of Atlantis outside Kennedy's Orbiter Processing Facility-1, "the millions of visitors who come here every year to learn more about space and to be a part of the excitement of exploration will be able to see what is still a great rarity -- an actual flown space vehicle."

After hearing the news, Kennedy's Center Director Bob Cabana said to Bolden, "Thank you so much for trusting us with the care of Atlantis. I promise you, we'll take good care of her."

On the day that NASA celebrated the 30th anniversary of the first space shuttle launch -- Columbia's STS-1 mission on April 12, 1981 -- the space agency and its design partners received the "go" they've been hoping for with the announcement that a shuttle will join rockets, capsules and artifacts from the Mercury, Gemini and Apollo eras at the Kennedy Space Center Visitor Complex.

"This is a really, really big artifact that will really bring the legacy of what Kennedy has meant to people locally and around the world," said Bill Moore, chief operating officer of the visitor complex. "I think it ties in just absolutely perfectly to what the history of the visitor complex means."

Inside a new 65,000-square-foot facility in the heart of the complex's Space Shuttle Plaza, the 100-ton shuttle is expected to look like its soaring through space, with its landing gear raised and payload bay opened. Anchored at an angle, guests would get an up-close view of Atlantis' belly and the thousands of black heat shield tiles that allowed the shuttle to travel more than 115 million miles and through Earth's harsh atmosphere. The shuttle's robot arm also could be deployed, as if reaching out to a satellite.

"We plan on adding to the Shuttle Launch Experience attraction and enhancing the storytelling with what will become a very, very large addition to this complex," said Luis Berrios, a NASA design specialist working with the visitor complex's development team.

Berrios and his teammates envision the facility as a super-charged, space shuttle-themed science center with interactive exhibits to engage, entertain and inspire even the world's most tech-savvy audience. And while these new exhibits will shimmer, Atlantis is expected to keep every bit of wear-and-tear it encountered on its 32 -- or 33 at the time of retirement -- journeys into space.

The display could reveal the way shuttle crews performed science and research experiments in the weightlessness of space and how the shuttle was the go-to vehicle for transporting International Space Station laboratories, modules and solar panels to low Earth orbit.

During the announcement ceremony, the station's Expedition 27 crew thanked the NASA team for its hard work and dedication to the shuttle program.

"We will miss the capabilities and the beauty of the space shuttle. It has been a national icon for innovation and exploration for 30 years, but its legacy and yours lives on in the work that we do here on the ISS," said NASA astronaut Catherine Coleman. Designers also are looking to convey how the shuttle and its crew members deployed, retrieved and serviced satellites -- much like Atlantis did two years ago on the shuttle's final servicing mission to NASA's treasured Hubble Space Telescope.

Berrios described one of his favorite milestones in shuttle history -- Bruce McCandless flying untethered for the first time with the manned maneuvering unit (MMU) to retrieve a pair of communications satellites in 1984 -- and what it would feel like to share that experience with generations to come.

"What must that have felt like for him? It must have been amazing," Berrios said.

Designers also want to paint a picture of just how many working parts it took to launch NASA's space shuttle fleet. There are many features that could be worked into the display to help guests appreciate the shuttle system as a whole, including the solid rocket boosters and giant external fuel tank.

Even structures saved during the deconstruction of Kennedy's Launch Pad 39B could be incorporated, such as the gaseous oxygen vent arm, called the "beanie cap," and the orbiter access arm, which is replete with the memories of astronauts walking through before waving farewell and boarding a shuttle for liftoff.

While the spacecraft and its myriad of components will be the main attraction, designers also dove deep into the human aspect of the program. "We treat our orbiters like our own family members and they're very close to our hearts," Berrios said. "That is probably the most important component of our storytelling -- to let the world know how passionate our Space Shuttle Program has been to our whole NASA family, all of its civil servants and contractors, and all the other sister centers that have played a huge role in making Kennedy Space Center the launch site to deliver the future for over 30 years."

Annually, the Kennedy Space Center Visitor Complex reaches more than 1.5 million guests and by adding a flown shuttle to the mix, it's expecting a major boost in attendance. It's not just about the number of people who will flock to see the space-flown shuttle, though, Moore said, it's about touching the lives of NASA's future engineers, scientists and explorers.

"I really like hearing about the rides on the way home when the kids say, 'Mom, did you know?'" Moore said. "Those conversations are priceless and we're setting the stage for these kids' future in a big way."

Atlantis is scheduled to round out the shuttle program this year with its last flight -- STS-135. After its return from space, technicians and engineers will spend a few months prepping the vehicle for public display -- paving the way for a grand opening as early as the summer of 2013.

"This is the home of human spaceflight, it's the home of the space shuttle," Cabana said. "To be able to share that excitement, that story with all our visitors to inspire the next generation of explorers . . . it's huge in being able to tell the story of human spaceflight and of NASA. I think it's outstanding that Atlantis gets to stay here with us and not leave after her last flight."

NASA's remaining shuttles will embark on longer journeys to reach their final destinations and Bolden congratulated the institutions that will have the unique opportunity to share a large piece of space history with the world by saying, "Take good care of our vehicles. They've served the nation well and we at NASA have a deep and abiding relationship and love affair with them that's hard to put into words."

Shuttle Discovery will go to the Smithsonian's National Air and Space Museum Steven F. Udvar-Hazy Center in Chantilly, Va., for exhibition. Endeavour will go to the California Science Center in Los Angeles, and Enterprise will be featured at New York City's Intrepid Sea, Air and Space Museum. Bolden said many of the applicant institutions will receive significant shuttle hardware and artifacts to share with visitors.

"Even though the space shuttles aren't going to fly anymore, they're still going to launch the dreams of future exploration," Berrios said. "Thousands of years from now, it'll be the same process -- smart, courageous people doing amazing things."