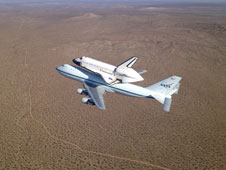 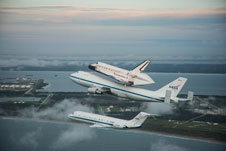 Image above: A C-9 NASA uses to scout a flight path ahead of the Shuttle Carrier Aircraft and Endeavour flies beside the aircraft combination shortly after takeoff fro Kennedy Space Center in Florida. Photo credit: NASA
› View Larger Image 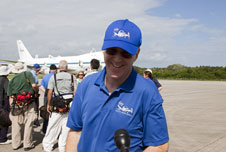 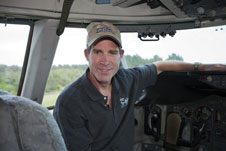 Image above: Bill Rieke, pilot of the Shuttle Carrier Aircraft, in the cockpit of the modified 747. Photo credit: NASA/Kim Shiflett
› View Larger Image

Los Angeles welcomed space shuttle Endeavour and the Shuttle Carrier Aircraft today with crowds and a festival environment at Los Angeles International Airport to conclude the shuttle's cross-country ferry flight to deliver it to the city where it will be displayed as an inspiration to future explorers.

The shuttle and SCA, weighing some 475,000 pounds combined, left NASA's Kennedy Space Center on Wednesday morning to begin the three-day trek across the southern United States on the way to Los Angeles. The first day saw Endeavour flown over the Michoud Assembly Facility near New Orleans, Stennis Space Center in Mississippi and several points around Houston before it touched down at Ellington Field outside Johnson Space Center.

Thursday saw the 747 and Endeavour head west from Houston to Edwards Air Force Base in California. NASA's Dryden Flight Research Center is on Edwards. The shuttle fleet made multiple landings on the runways at the dry lake there, including the glide tests Enterprise performed flying off the back of the same SCA that was carrying Endeavour.

Tonight, Endeavour will be removed from the SCA using an elaborate set of cranes and wind restraints. It will be placed on a special transportation system and moved into a United Airlines hangar, where it will remain for several weeks while final preparations for its transport and display are completed.

The pilots of the aircraft carrying Endeavour already knew what it's like to lead an aerial parade.

"The Washington beltway was pretty packed with people," said Jeff Moultrie, chief pilot of the Shuttle Carrier Aircraft, or SCA, about the crowds the crew witnessed gathered around Washington, D.C., in April as they delivered Discovery to the Smithsonian's Air and Space Museum. "In fact, I think it stopped. We could see people stopped in their cars and up on buildings and such."

That ferry flight and a similar one a few days later that flew over New York City with Enterprise were two of a very few times a shuttle has been flown over northeastern cities. Enterprise was flown to the nation's capital in 1985 before going on display at the Smithsonian.

"We weren’t sure what to expect, since we had never done something like this before with the space shuttle on top of the 747, what would be the reaction?" said SCA pilot Bill Rieke. "When that happened and we saw the reaction, that was priceless."

The flight crew for the SCA, a modified 747 airliner, is expecting much the same interest this time.

"We're proud to show off our work that NASA's done," Rieke said.

Moultrie said much more effort goes into setting the courses for the flights delivering the retired space shuttles to their display locations than did the ferry flights that carried the spacecraft back to Florida after a California landing.

Large aerial corridors are assigned for the ferry flight so no other planes can use the airspace while the shuttle and SCA are flying through, for example. Also, the flyovers call for the aircraft to pass into restricted airspace around some notable sites.

"We had a massive coordination with the Federal Aviation Administration," Moultrie said. "The regular ferry flights required none of this. Other than some flyovers on arrival that we did as a bonus, we really didn't do flyovers."

Although they saw the crowds from inside the cockpit of the 747, Moultrie and Rieke said they made sure not to get distracted by them.

"We still have a mission to do and that is, we need to deliver it safely where it belongs and that is the part I'm focused on," Rieke said.

The flight also makes a few special demands of pilots as they line up the best way to approach a landmark so the flyby can be recorded in the best way.

"To do this type of flying, we need to consider the photography aspects, the sun angle, what the geometry with the chase ship needs to be, that type of thing," Moultrie said. "This is obviously the biggest thing I've done in aviation and probably the biggest thing I ever will do."