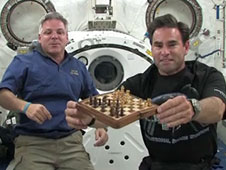 Astronauts aboard the space shuttle Endeavour wrapped up their Earth vs. Space 2011 chess match as the shuttle touched down at Kennedy Space Center early June 1 without bringing the contest to a checkmate.

Rather than continue the match, STS-134 Mission Specialist Greg Chamitoff and Pilot Greg Johnson agreed with the U.S. Chess Federation to abide by votes from match followers on the federation’s web site.

"To our challengers from planet Earth, farewell from Endeavour,” Chamitoff said in one of his final tweets as @Astro_Taz about the match, which was shared on the web via social media. “This has been a blast! We've concluded that humans are very wise, and we have great hope for the future of this planet.”

Earth's voters chose to claim chess victory, with 59 percent of the voters selecting Earth as the winner. The remaining votes included 35 percent who suggested calling the match a draw, and just 6 percent voting the astronauts as the winners.

“This has been quite a dynamic game to this point,” Chamitoff said. “I think that Box (Greg Johnson) and I gave our fellow Earthlings quite a run for their money. Although we sacrificed a pawn, it allowed us keep a lot of pressure on their king for much of the game, while preventing Earth from critical development. But Earth made all the right moves, of course. We still had hope of breaking up the king-side by advancing the knight pawn, but now we’ve got to defend the queen-side as well. Box keeps reminding me that there’s no way we can win against the whole planet!”

While it wasn’t traditional speed chess, speed was the name of the game when Chamitoff and Johnson challenged the world at 17,500 miles an hour during their relatively brief flight to the International Space Station. During this match, players from Earth had the opportunity to vote on the home planet’s moves, and eventually on the final outcome of the match. Over the course of the game, 4,316 total votes were cast, and an average of 196 votes per move were cast. The final match result was voted on by 257 people.

“As match director, I would observe that humans are optimists -- which is one reason, of course, that Taz and Box have so much hope for us all -- and both sides were clearly still reaching for the stars right up to (and beyond) the last moves before Endeavour landed,” said Hal Bogner, who served as the USCF’s match director. “In the course of the game, both sides’ play demonstrated creativity, ambition and resolve. And, were the game to continue, either side could have won.”

This was the second match that NASA and the U.S. Chess Federation (USCF) had teamed up to play. The first was during Chamitoff’s six-month stay on the space station in 2008.

“What an exciting adventure we had on this very successful spaceflight, and playing our Space vs. Earth Chess Match with all of you was part of the fun! The world needs bright and strategically thinking minds like yours to pave the way to a prosperous future for all of us on Earth and beyond,” Chamitoff said. “Thanks for flying with us!”

For a detailed play-by-play of the match, visit the USCF Web site at:

Or check out the official International Space Station’s Facebook page at: