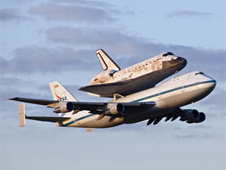 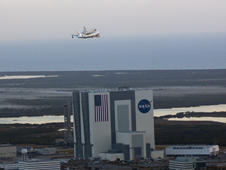 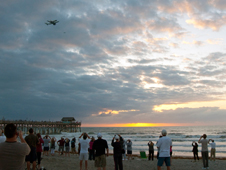 Space shuttle Discovery departed NASA's Kennedy Space Center in Florida for the last time with an early-morning takeoff atop NASA's Shuttle Carrier Aircraft (SCA). Instead of blazing a trail toward low Earth orbit, the agency's most-flown shuttle is on its way to Smithsonian's National Air and Space Museum Steven F. Udvar-Hazy Center in Chantilly, Va.

The SCA transporting Discovery took off from Kennedy at 7 a.m. EDT, just as the first light dawned at the Shuttle Landing Facility. The ferry flight concluded at 11:05 a.m. when the aircraft touched down at Washington Dulles International Airport in Sterling, Va.

Before the departure from Kennedy, invited guests, members of the media and NASA officials were joined at the runway by members of Discovery's first and last astronaut crews for an emotional send-off.

"This is the place where people have really taken care of Discovery for its entire life," said NASA astronaut Nicole Stott, a mission specialist on Discovery's final flight, STS-133. Before joining the ranks of the astronaut corps, Stott worked in a variety of shuttle-processing roles at Kennedy.

"It's like sending someone from your family to go live somewhere else," Stott said. "Discovery's leaving home and starting a new life somewhere else."

The spacecraft's retirement journey began with today's ferry flight. It will then be removed from the Shuttle Carrier Aircraft and relocated to the Udvar-Hazy Center on April 19.

Designated NASA 905, the aircraft carrying Discovery to Virginia is the same one that first delivered the spacecraft to Kennedy on Nov. 9, 1983. The aircraft is one of two modified 747 jets the agency used to ferry orbiters during the Space Shuttle Program.

Discovery flew 39 missions, more than any other vehicle in the fleet. Its 26-year spaceflight career began Aug. 30, 1984, when it carried six astronauts into orbit on the STS-41D mission. The Hubble Space Telescope was deployed from Discovery's payload bay. The spacecraft also completed the first space shuttle rendezvous and the final shuttle docking with the Russian space station Mir. Astronaut and U.S. Senator John Glenn rocketed into orbit aboard Discovery as a member of the STS-95 crew -- 36 years after his pioneering Mercury flight.

After the Challenger and Columbia tragedies, it was Discovery that led the space shuttle fleet back to orbit. It docked with the International Space Station 13 times and supplied more than 31,000 pounds of hardware as the laboratory grew.

The STS-133 mission to the space station was Discovery's final spaceflight. Led by Commander Steve Lindsey, the six-person shuttle crew delivered the Permanent Multipurpose Module, offering extra room for science tasks and storage, and Robonaut 2, a humanoid robotic helper. On March 9, 2011, Discovery's main landing gear touched down for the last time on Kennedy's Runway 15. It traveled more than 148 million miles and spent a total of one year in space.

Discovery functioned "amazingly well" on that flight, according to mission specialist Alvin Drew. "That was the first time I've ever seen a mission when the shuttle lands with a clean rap sheet," Drew said.

He recalled a conversation with members of Discovery's processing team. "They were beaming with pride and said, 'We're the pros. This may be the last one, but we're going out on top of our game.' That was their message. 'We're going to give you the best orbiter you've ever flown in your life.' And they did."

That final homecoming kicked off a "transition and retirement" phase as the shuttle processing team worked to prepare the spacecraft for public display. Its main engines were removed and replaced with mock-ups, sparing the working engines for reuse in NASA's under development Space Launch System heavy-lift rocket. The spacecraft's three power-plant fuel cells were drained and purged, and the forward reaction control system and orbital maneuvering system were sent off for cleaning at the White Sands Test Facility in Las Cruces, N.M., then reinstalled.

"Although we weren't processing Discovery for another flight, we still had to do a lot of planning with many requirements to satisfy. The biggest difference was making the vehicle safe to go to her display site," said Bart Pannullo, NASA vehicle manager for the shuttles' transition and retirement. "It was similar to flight processing flows in that we were still working to a schedule to meet a defined delivery date."

In December 2011, Discovery's 60-foot-long payload bay doors were closed for good, and the crew module went dark as technicians permanently powered down the vehicle. Soon after, an aerodynamic tail cone was fastened over the orbiter's main engines, and the crew access hatch was closed and sealed for the last time.

"I spent the better part of my career, starting in 1988, working on Discovery in one capacity or another," Pannullo said. "I will miss seeing her in the OPFs (Orbiter Processing Facilities) and going inside the crew module. But mostly, I will miss the excitement of the beautiful launches and landings she provided."

Challenges await when the ferry flight lands at Dulles. There's no mate/demate device at the airport to remove the spacecraft from the SCA. In fact, the team had to rent some supplies locally, such as generators, restrooms, fencing and more. Even more equipment was delivered in more than 20 truckloads from Kennedy. It took more than 60 truckloads to bring in the parts for the two cranes required to lift the orbiter off the aircraft.

"The largest challenge is offloading Discovery from the SCA using two heavy lift cranes and the wind restraint system," said Stephanie Stilson, NASA flow director for transition and retirement. The system originally was intended for use if a shuttle ever had to land anywhere other than Kennedy or Edwards. It hasn't been used since Enterprise was delivered to the Smithsonian in 1985. "Offloading the orbiter is a hazardous operation since it requires working under a suspended load," Stilson added.

The transition and processing team will go through a similar process again later this year when shuttle Endeavour moves from Kennedy to the California Science Center in Los Angeles. Shuttle Atlantis will remain at Kennedy in a new exhibit at the center's visitor complex.

The test orbiter, Enterprise, currently is displayed inside the Udvar-Hazy Center. Once Discovery is on the ground, Enterprise will take its place atop the carrier aircraft for the move to the Intrepid Sea, Air and Space Museum in New York. Discovery will take the place of honor inside the popular Smithsonian facility.

"Working with the Smithsonian team has been wonderful," Stilson said. "Their passion for not only telling the story of this amazing spacecraft, but also the team behind Discovery's proud history, has made it easier to accept that we will no longer have the honor and privilege of caring for Discovery."

At Kennedy's Shuttle Landing Facility, busloads of guests gathered before dawn for the perfect view of Discovery's departure. A hush descended over the crowd as a procession of aircraft -- a helicopter, T-38 jet, and finally, Discovery and its ride -- moved to the north end of the runway for takeoff. As with all ferry flights, a "pathfinder" aircraft also departed with the SCA. The NASA C-9 jet will fly about 100 miles ahead of Discovery to scout for the safest route between Kennedy and Dulles.

The Shuttle Carrier Aircraft took Discovery on one last aerial tour of Florida's Space Coast. It also flew above the Kennedy Space Center Visitor Complex, Vehicle Assembly Building and Kennedy Press Site before making one more pass over the Shuttle Landing Facility on its way out of the area for the final time.