Grow Text SizeShrink Text Size
Counting Down to Launch
All eyes will be riveted on the giant digital display clock at NASA Kennedy Space Center's Press Site in Florida as countdown commences for the launch of space shuttle Discovery.

The famous landmark displays the precise hours, minutes and seconds leading up to and after spectacular shuttle liftoffs. 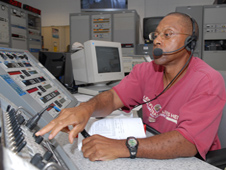 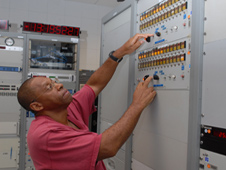 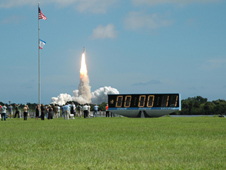 Image: The countdown clock is one of the most watched timepieces in the world. On Jan. 21, 2000, the clock at Kennedy Space Center's Launch Complex 39 Press Site was added to the U.S. National Register of Historic Places. Photo credit: NASA/Jim Grossmann
›   Larger image


The countdown clock and many other clocks around the center are maintained and exactly set by the IMCS Timing and Imaging Technical Support Group with QinetiQ. From a room in the Launch Control Center, Lead Electronic Technician Robert Wright and several timing technicians monitor and distribute the official time to facilities at the center, including the Launch Control Center firing rooms.

During launch countdown and preflight tests, the timing room is staffed 24/7. The group sets and monitors several panels of timer controls. Above the panels are digital clocks that display various times, including the launch window remaining, hold time remaining, the countdown clock time and GMT time.

They also support preflight tests, such as the Terminal Count Demonstration and the Shuttle Final Countdown Phase Simulation, a launch team training exercise.

"Timing is critical to us," said Steve Payne, who is a NASA shuttle test director at Kennedy. "The launch window is very limited and it is very important that all of the clocks are displaying and counting down the correct time."

For shuttle launches, Payne said call to stations is usually 73 hours before the actual launch time. At that time, the NASA test director communicates with the ground launch sequencer engineers and they in turn, talk to the timing group and give the "go" to start the countdown clock.

"We double and triple check our times. We target launch times down to the second, and things happen quickly as we approach T-0. These numbers are critical to us and they must be correct," Payne said.

The Countdown Clock is one of the most-watched timepieces in the world. Learn how the countdown operates, and what milestones to watch for during live launch coverage.
›   Countdown 101

"We are the source for the official launch and landing time," Wright said. "We have redundant systems in case there are power failures or glitches in the system."

During launch countdown, timing signals also are sent to a predetermined number of universal camera sites located near and around the launch pads and the Banana Creek viewing site for the high-speed cameras.

It's not just the time that needs to be set to perfection, though. The group checks the bulbs inside the countdown clock quarterly and double-checks them about a week before it is turned on for a launch or video shoot. During the quarterly maintenance, technicians run through the numbers from 1 to 9, making sure each bulb lights up properly. Surprisingly, the light bulbs used in one of the most watched timepieces in the world are the same type of 40-watt light bulbs found in your local grocery or hardware store.

The official countdown is scheduled to begin at 3 p.m. EDT, Friday, Oct. 29, and the clock, located on the lawn in front of Kennedy's News Center will go live at 2 p.m., Saturday, Oct. 30, counting down to Discovery's STS-133 launch to the International Space Station targeted for 4:40 p.m. Nov. 1.