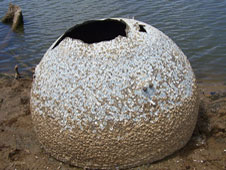 A newly discovered aluminum tank from space shuttle Columbia's STS-107 mission will be recovered from the shoreline of Lake Nacogdoches in east Texas and eventually will likely be made available to researchers as are other parts of the Columbia debris, NASA's project manager for the recovery said.

"It's very important for us to bring all of Columbia home and we've done that since the accident in 2003," said Mike Ciannilli, the project manager for Columbia's recovery.

The sphere was one of 18 cryogenic tanks Columbia carried during its 16-day mission. It had been underwater for the past eight and half years, having landed there Feb. 1, 2003, when the shuttle broke up over east Texas during re-entry. It was uncovered recently when the lake's water level diminished by about 11 feet during an ongoing drought.

"Recently we got a call from the local authorities in Nacogdoches about a metal sphere and we asked the authorities to take a picture for us and send it to us," Ciannilli said. "We analyzed that with our teams here at the Cape and determined it to be a piece of space shuttle Columbia."

The tank does not hold any hazardous materials, but could have sharp edges, Ciannilli said. In space, the supercold chemicals stored inside the tanks powered the shuttle's fuel cells to generate electricity for the spacecraft. All the shuttles have several tanks built into their fuselages and Columbia carried an extra set in its payload bay so it could stay in space longer than usual for the research flight.

NASA worked with local authorities to pick up the tank and now will be sending it back to Kennedy Space Center.

"We also want to be preserve the integrity of the piece, so we want to be very careful how we extract it, clean it up and then transport it back to Kennedy Space Center," Ciannilli said.

Searchers recovered more than 84,000 pieces of the shuttle during recovery operations, accounting for about 40 percent of the shuttle. Much of the debris was found in the Nacogdoches area.

"Lake Nacogdoches is nearby the centerline of the vehicle's track, so back in initial recovery operations in 2003, we did find a great deal of components in that area," Ciannelli said.

The pieces are stored in the Vehicle Assembly Building and some are loaned to researchers studying spacecraft dynamics and to help with future spacecraft design. "Much like the 107 mission was a mission of research, we like to continue and honor the legacy of the 107 crew and continue that research mission in the future," Ciannilli said.