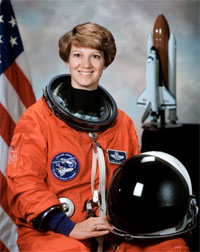 Astronaut Eileen Collins is leaving NASA. Collins was the first woman to command a space shuttle and the leader of Discovery's Return to Flight mission last year. She plans to pursue private interests and spend more time with family.

"Eileen Collins is a living, breathing example of the best that our nation has to offer," said NASA Administrator Michael Griffin. "She is, of course, a brave, superb pilot and a magnificent crew commander. Beyond those qualities, she is both very bright and modestly self-effacing about that fact. And above all, she is possessed of a quiet determination to attain the very highest levels of accomplishment. I am proud to know her and will greatly miss her at NASA."

"Eileen is a true pioneer in space and on Earth," said Mike Coats, director of NASA's Johnson Space Center, Houston. "Her service and dedication to her country, to NASA and to space exploration are an inspiration. She meets every challenge with confidence and an ever-present smile."

Collins was selected as an astronaut in 1990. She served as the pilot on mission STS-63 in February 1995, the first shuttle mission to rendezvous with the Russian Mir Space Station. In May 1997, she flew as pilot on mission STS-84, the sixth shuttle flight to dock to Mir. Collins commanded the Space Shuttle Columbia on mission STS-93 in July 1999, the flight that launched the Chandra X-Ray Observatory.

Her most recent space flight was as commander of July's STS-114 mission, the first shuttle flight since the Columbia accident in 2003. During the 14-day mission, Collins and her six-member crew tested new shuttle safety enhancements and resupplied the International Space Station.

"Eileen is a gifted leader who knows what it takes to get a team through the most difficult of times," said Flight Crew Operations Director Ken Bowersox. "All of us will feel Eileen's absence, but regardless of the path she pursues after leaving NASA, I know she will continue to exert a positive influence on the explorers of today and tomorrow."