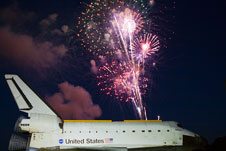 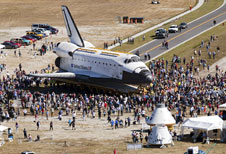 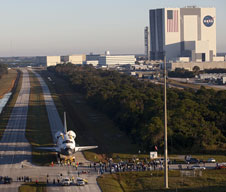 NASA conducted a grand sendoff for space shuttle Atlantis Nov. 2 moving the shuttle 10 miles from its workplace of almost 30 years to a new, custom-built museum exhibition at the Kennedy Space Center Visitor Complex that is to be equipped with some of the most high-tech displays imagined.

"Godspeed, Atlantis, on your next mission of inspiration and motivation," said NASA Administrator Charles Bolden shortly before signing over the retired shuttle for permanent display. "Atlantis' final mission may have closed out the space shuttle program, but the spirit that created that program and built her is very much alive."

Shuttle-era astronauts and members of the workforce who readied the space shuttles for 30 years came in before sunrise to see Atlantis off.

"I think that the shuttle was a great book, it really was, and this little part is like the epilogue," said Chris Ferguson, who commanded the last mission of Atlantis, STS-135, which was also the final flight of the shuttle program. "You know, if it's a bad book, you don't read the epilogue. This is a good book and this is kind of the story of how it was all made and how it was all done. This is good."

The move began at about 6:30 a.m. with the shuttle backing out of Kennedy Space Center's Vehicle Assembly Building. Atlantis moved down the wide roadway between the three Orbiter Processing Facility hangars that served as the shuttle fleet's home before being turned around at sunrise and taking the main roadway south at Kennedy. The trip concluded about 11 1/2 hours later with Atlantis reaching the new exhibit area. The shuttle Atlantis made two ceremonial stops along the way so center employees and then the public could pay tribute.

Fireworks punctuated the evening at the visitor complex as Atlantis stood halted outside the 90,000-square-foot exhibit hall being built to house the venerable shuttle. The next morning, crews carefully inched the retired orbiter inside the walls. With a 78-foot-wide wingspan and a tail that reaches more than five stories, the spacecraft was too big to be rolled into a completed museum wing, so the last wall will be erected behind it during the next few weeks.

The spacecraft will be covered in some 16,000 square feet of shrink wrap to protect it while workers finish the inside of the exhibit hall and then stand Atlantis on a 36-foot-high pedestal where it will be seen as it flew in space with cargo bay doors open, landing gear retracted and the robotic arm will be deployed.

For some, seeing Atlantis move into its final home was worth a special trip of their own. Gayle Dye of Albuquerque, N.M. made trips to Florida to see several shuttle launches and drove to White Sands Space Harbor in her home state to see Endeavour fly over on the back of the 747 Shuttle Carrier Aircraft.

"I've kind of done the whole gamut now, from launch to the 747 and now to seeing it in person," Dye said. "I just got hooked on launches. It's the adventure of space."

Atlantis made the trip atop Kennedy's low-slung, 76-wheel vehicle known as the orbiter transfer system. A parade including a marching band and a phalanx of shuttle workers and astronauts accompanied the shuttle to a ceremony to sign over the artifact for display.

Bolden, a veteran of Atlantis' STS-45, said the shuttle program's 30 years of accomplishments continued the space agency on a path of groundbreaking exploration that NASA has no intention of detouring from.

"We did great things and now we are going to do greater things," Bolden said.

Following a signing ceremony, Atlantis was taken on a route through Kennedy's industrial area where it passed by the center's headquarters and other facilities before taking a turn and passing by the Space Life Sciences Laboratory, a research facility whose work includes developing and implementing scientific experiments for the International Space Station.

The shuttle convoy paused at Exploration Park for a few hours where visitors could see the gigantic spacecraft up-close, take pictures with it and participate in a festival of space-related displays and activities.

"It would've been weird not to come out here," said Kim Siems, who lives near Kennedy.

Atlantis made its first trip into orbit in October 1985, when it flew a classified mission for the Department of Defense. It made its second trip into space a month later and by the time it retired in 2011, Atlantis had completed 33 successful missions.

STS-51J, as Atlantis' first flight was designated, was commanded by shuttle veteran Karol "Bo" Bobko, who reflected on the spacecraft's first mission during the signing ceremony. He had been on two other shuttle missions that also were maiden voyages for the spacecraft and the way to launch on those included several delays and changes. Not so with Atlantis. "My third flight was the first flight of Atlantis and it went on-time to the second," Bobko said. "For me, Atlantis represents something that reflects the maturity, the reliability and capability of the space program. Atlantis' mission log includes launching the Magellan spacecraft to map Venus and the Galileo probe to Jupiter, both in 1989.

"Both of those were stunning scientific successes," said Roger Launius, curator at the Smithsonian's National Air and Space Museum and NASA's former chief historian. "It's hard to underestimate the importance of those flagship missions."

Having started its spaceflight career flying Cold War missions, Atlantis became a high-profile symbol of cooperation in 1995 when the shuttle docked with the Russian space station Mir.

"The Mir missions are essentially the dry run for the cooperative effort for the International Space Station," Launius said.

Atlantis is the third and final shuttle of NASA's former operational fleet to be moved into a museum. Discovery, the oldest active shuttle at its time of retirement, has been on display in the National Air and Space Museum's Udvar-Hazy Center outside Washington, D.C., since April.

"They are being given honorable retirements," Launius said. "This is a permanent accomplishment of the American people and it's important that we understand this chapter of not just space history, but American history."