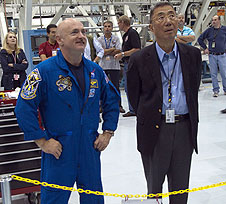 Endeavour Commander Mark Kelly, left, and Professor Sam Ting look over the Alpha Magnetic Spectrometer as it sits in a workstand at NASA's Kennedy Space Center in Florida. Kelly will command the STS-134 mission to take the AMS to the International Space Station. The cutting edge instrument is the brainchild of Ting, a Nobel laureate. Photo credit: NASA/Cory Huston
› Larger image 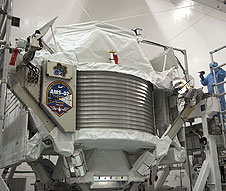 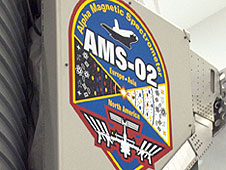 The logo of the AMS shows the anti-universe that the instrument may be able to find. The AMS is designed to decipher the secrets hidden in cosmic rays. Photo credit: NASA/Cory Huston
› Larger image

The Alpha Magnetic Spectrometer will revolutionize what we know about invisible cosmic rays the same way NASA's Hubble Space Telescope rewrote what we know about the visible universe says the intellectual force behind the instrument. The AMS is to launch on space shuttle Endeavour in April.

Those expectations are not lost on the team putting the finishing touches on the AMS and packing it for launch.

"This kind of has grains of Hubble, looking at the universe in a different perspective," said Boeing's Bob Hart, the payload flow manager for the AMS. "The science, the exploration potential that will come out of this makes it very exciting to be a part of."

Professor Sam Ting, a Nobel Prize winner for his 1974 discovery of a heavy elemental particle, sees the AMS as a revolutionary observatory to measure invisible cosmic rays as they traverse the universe.

The AMS is a 2-ton ring of powerful magnets and ultrasensitive detectors built to track, but not capture, cosmic rays. The 15,251-pound instrument will be connected to the outside of the International Space Station, braced on the orbiting laboratory's right hand truss and tilted a bit so it will not interfere with any of the station's mechanisms and storage platforms. It will be operated remotely from Earth and should not require any attention from astronauts in orbit.

"The astronauts on the space station have many things to do," Ting said. "We wouldn't dare bother them."

By recording the traces cosmic rays make as they pass through, the AMS might uncover a universe that is now invisible. Although Ting is hesitant to make predictions about what the instrument will find, he said the instrument was designed with dark matter and antimatter in mind. Very little is known about dark matter although it makes up an estimated 90 percent of the mass in the universe.

Although Earth-based facilities have been built to create powerful streams of subatomic particles, Ting said their limits are more than 14 million times weaker than the power produced by cosmic rays in space.

"No matter how large an accelerator you build, you're not going to compete with space," Ting told reporters recently. Ting offered the news media a close look at the AMS before it was packed for loading into Endeavour's cargo bay for launch.

How much of a difference is that? Well, according to the organization that operates the Large Hadron Collider near Geneva, Switzerland, a single trillion electron volt particle is about the same amount of energy produced by a mosquito in motion. The fastest cosmic ray yet observed was a subatomic particle with the force of a baseball, according to a University of Utah account of the observation.

The AMS going up on Endeavour is the second one built in the program. The first one was a prototype instrument that flew on shuttle Discovery during STS-91. It spent about two weeks in orbit proving the merits of the design. Even with that very short mission, the instrument provided enough information to make physicists reanalyze some of their theories. Four unique scientific papers were published following the mission, Ting said.

"None of the results we see can be explained by existing theory," Ting said of the findings.

The second AMS, the one flying on Endeavour, is designed to operate as long as the space station itself is operational. That's why Ting said the team opted to replace a ring of supercold magnets designed for a 3-year lifespan with a set of permanent, though weaker, magnets that can work 20 years.

The AMS was assembled and tested in Europe, including calibration work in the Large Hadron Collider in Switzerland. It was flown aboard a U.S. Air Force transport plane to NASA's Kennedy Space Center in Florida in August 2010, and spent the next several months in a work stand in the Space Station Processing Facility where technicians went through the last steps of processing for flight.

The payload processing teams are used to dealing carefully with anything designed to go into space and many precautions are taken. Still, there is a new level of anticipation for the AMS.

"This is probably the most exciting one I've been on," said Joe Delai, payloads mission manager for STS-134.