Sound Suppression System
Overview: A sound suppression system was installed on the pads and the mobile launcher platform to protect the orbiter and its payloads from being damaged by acoustical energy reflected from the platform during liftoff. 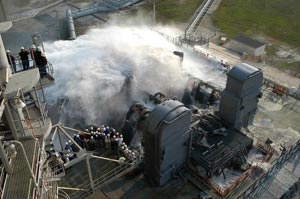 Image to left: Water is released onto the mobile launcher platform on Launch Pad 39A at the start of a water sound suppression test. Workers and the media (left) are on hand to witness the rare event. This test is being conducted following the replacement of the six main system valves, which had been in place since the beginning of the Shuttle Program and had reached the end of their service life. Also, the hydraulic portion of the valve actuators has been redesigned and simplified to reduce maintenance costs. Credit: NASA/KSC

Water stored in a 290-foot-high, 300,000 gallon tank on the northeast side of the pad is released just prior to the main engine ignition and flows by gravity to special outlets on the platform, including six 12-foot-high quench nozzles, or "rainbirds." Nine seconds after liftoff, peak flow rate is 900,000 gallons per minute.

The system reduces acoustical levels within the orbiter payload bay to about 142 decibels, below the design requirement of 145 decibels.
NASA's John F. Kennedy Space Center
› Back To Top