Rotating Service Structure (RSS)
Overview: The rotating service structure provides protected access to the orbiter for installation and servicing of payloads at the pad, as well as servicing access to certain systems on the orbiter. The majority of payloads are installed in the vertical position at the pad, partly because of their design and partly because payload processing can thus take place further along in the launch processing schedule.

Spacelab and other large horizontal payloads are loaded while the orbiter is in the Orbiter Processing Facility high bay. 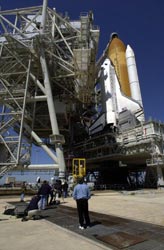 Image to left: Less than 24 hours before launch of STS-102, photographers capture the rollback of the rotating service structure from around Space Shuttle Discovery on Launch Pad 39B. Poised above the external tank is the gaseous oxygen vent arm with the "beanie cap," a vent hood. The rotating structure provides protected access to the orbiter for changeout and servicing of payloads. It is supported by a rotating bridge that pivots about a vertical axis on the west side of the pad's flame trench. Credit: NASA/KSC

The rotating service structure is 102 feet long, 50 feet wide, and 130 feet high. It is supported by a rotating bridge that pivots about a vertical axis on the west side of the pad's flame trench. The structure rotates through 120 degrees -- one third of a circle -- on a radius of 160 feet. Its hinged column rests on the pad surface and is braced against the fixed service structure.

The structure is retracted before launch.

The major feature of the rotating service structure is the Payload Changeout Room, an enclosed, environmentally controlled area that supports payload delivery and servicing at the pad and mates to the orbiter cargo bay for vertical payload installation. Clean-air purges help ensure that the payloads being transferred from the payload canister into the Payload Changeout Room are not exposed to the open air.

The payload is removed from the canister and later installed inside the orbiter cargo bay using the payload ground handling mechanism. Five platforms are positioned at five levels to provide access to the payload when it is installed on the mechanism. Each platform has extendible planks that can be configured to accommodate a particular payload.

Another feature of the rotating service structure is the orbiter midbody umbilical unit, which provides access and services to the midfuselage portion of the orbiter. The unit is 22 feet long, 13 feet wide, and 20 feet high. It extends from the rotating structure at levels ranging from 158 feet to 176 feet above the pad surface, and includes a sliding extension platform and a horizontally moving line-handling mechanism. The unit provides access to the midbody umbilical door. It is used to supply fluids to the orbiter's power reactant storage and distribution system and payloads. Liquid oxygen and liquid hydrogen for the fuel cells are funneled through here, as are gases such as nitrogen and helium.