Shuttle-Era Pad Modifications
Overview: The launch pads are taken out of service every three to five years for maintenance and modifications. This "Mod Period" lasts six to nine months, during which several contractors are tasked with specific modifications.

Image to left: Preparing for Return to Flight, workers at Kennedy walk the grounds around Launch Pad 39B looking for foreign object debris, or FOD.

The pad was recently refurbished and any possible debris left behind must be removed from the area prior to launch. Foreign objects that are alien to flight systems may cause material damage or may make the system or equipment inoperable, unsafe or less efficient. Credit: NASA/KSC

Some tasks completed in 2003 on Pad A were adding a new 5,000-square-foot operations building and computer-automating the payload ground handling mechanism.

The Pad A operations building is a mix of office and shop space, providing space for NASA, United Space Alliance and subcontractor personnel previously scattered around the complex. The include pad operations managers, quality and safety personnel, system engineers, planners and schedulers and shops for the cryogenic, hypergolic, electrical and environmental control systems. The building also houses personnel for payload, external tank/solid rocket boosters and space shuttle main engine operations at the pads.

Consolidation of the personnel into one site has reduced maintenance requirements as well as increased efficiency and morale.

The payload ground handling mechanism is used in the Payload Changeout Room on the rotating service structure to remove payloads from a transportation canister and install them into the orbiter.

Essentially NASA's largest forklift, the handling mechanism is now controlled by a single operator, compared to the previous method of two or three working hand controls. It has greater tolerance for accuracy. 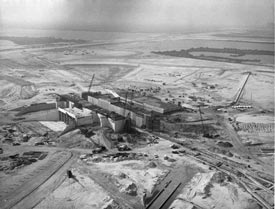 Image to left: An aerial view of early construction of Launch Pad 39A, looking southwest. Pad 39A is one of two launch sites for the Apollo Saturn V moon rocket. Each site is an eight-sided polygon and 3,000 feet across. The pad is 390 feet by 325 feet reinforced concrete hardstand standing 48 feet above sea level. The flame trench in the center holds a 700,000-pound flame deflector during launch operations. Credit: NASA/KSC

Corroson of metal structures are endemic to the waterside environment. The metal pad structures are stripped and repainted on a recurring basis. Sand blasting and repainting are best done during a Mod Period because they stop all other work and create a foreign object debris situation. Pad A is scheduled for a Mod Period in 2004 for sandblasting and painting.
NASA's John F. Kennedy Space Center
› Back To Top