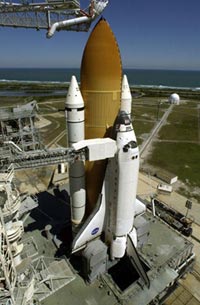 Overview: This is the lowermost arm, located 147 feet above the pad surface. It allows personnel to enter the orbiter crew compartment. The outer end of the access arm features an environmental chamber or "white room" that mates with the orbiter and holds six people. The arm remains in the extended position until seven minutes, 24 seconds before launch to serve as an emergency escape route for the flight crew. It is 65 feet long, 5 feet wide, and 8 feet high, and can be mechanically or manually repositioned in about 15 seconds in the event of a contingency.

Image to left: Space Shuttle Discovery sits poised on Launch Pad 39B, ready for launch at 6:42 a.m. EST March 8 on mission STS-102. Situated above the external tank is the gaseous oxygen vent arm with the "beanie cap," a vent hood. The orbiter access arm is extended from the fixed service structure (left) to the orbiter. An environmentally controlled chamber, known as the White Room, is at the end of the arm, providing entrance for the astronaut crew into the orbiter. In the distance, behind the space shuttle, can be seen the Atlantic Ocean. Credit: NASA/KSC