Launch Pad/Mobile Launcher Platform Interfaces
Overview: The space shuttle is brought to the pad atop the mobile launcher platform and crawler-transporter. The platform is parked on pedestals permanently located at the pad and is the surface from which the shuttle is launched. 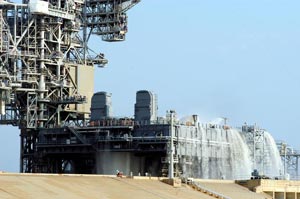 Image to left: For the fourth time in Space Shuttle Program history, 350,000 gallons of water are being released on a Mobile Launcher Platform (MLP) at Launch Pad 39A during a water sound suppression test. Because of the unusual event, media and workers watch from nearby vantage points on the fixed service structure (left). This test is being conducted following the replacement of the six main system valves, which had been in place since the beginning of the Shuttle Program and had reached the end of their service life. Credit: NASA/KSC

Several mobile launcher platform systems interface with the pad systems. These include the sound suppression system and the propellant transfer lines for the external tank. Helium and nitrogen, as well as ground electrical power and connections for vehicle data and communications, are also established through the platform's tail service masts.

The space shuttle main engine hydrogen burnoff system, located inside the tail service masts, eliminates free hydrogen present prior to main engine ignition. Hydrogen vapors are exhausted into the main engine nozzles during the start sequence; if ignited when the main engines ignite, a small explosion could ensue, which might damage the engine bells.

The six hydrogen burnoff pre-igniters are initiated just before main engine start. They throw off thousands of hot, luminescent balls into the area below the engine bells, igniting the free hydrogen and precluding a rough combustion when the main engines start.
NASA's John F. Kennedy Space Center
› Back To Top