Launch Complex 39
Overview: Since the late 1960s, Pads A and B at Kennedy Space Center's Launch Complex 39 have served as backdrops for America's most significant manned space flight endeavors -- Apollo, Skylab, Apollo-Soyuz and space shuttle.

Located on Merritt Island, Fla., just north of Cape Canaveral, the pads were originally built for the huge Apollo/Saturn V rockets that launched American astronauts on their historic journeys to the moon and back. Following the joint U.S.-Soviet Apollo-Soyuz Test Project mission of July 1975, the pads were modified to support space shuttle operations. Both pads were designed to support the concept of mobile launch operations, in which space vehicles are checked out and assembled in the protected environment of the Orbiter Processing Facility and the Vehicle Assembly Building, then transported by large, tracked crawlers to the launch pad for final processing and launch.

On April 12, 1981, shuttle operations commenced at Pad A with the launch of Columbia on STS-1. After 23 more successful launches from A, the first space shuttle to lift off from Pad B was the ill-fated Challenger in January 1986. Pad B was designated for the resumption of shuttle flights in September 1988, followed by the reactivation of Pad A in January 1990. 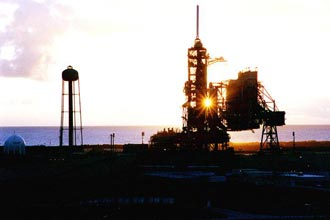 Image above: The early morning sun is caught between Space Shuttle Discovery and its external tank on Launch Pad 39A. On the right is the rotating service structure, not yet closed around the shuttle. At far left is the 300,000-gallon water tank that is part of the sound suppression system during launch. Credit: NASA/KSC

Both pads are octagonally shaped and share identical features. Each pad covers about a quarter-square mile of land. Launches are conducted from atop a concrete hardstand 390 feet by 325 feet, located at the center of the pad area. The Pad A and Pad B hardstands are 48 feet and 55 feet above sea level, respectively.