Landing 101
Follow along with the landing! Whether the space shuttle lands at the prime landing site at Kennedy Space Center in Florida or its backup landing site at Edwards Air Force Base in California, the Virtual Launch Control Center is the only place online to get breaking information directly from NASA. 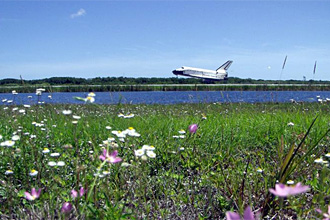 When it is time to return to Earth, the orbiter is rotated tail-first into the direction of travel to prepare for another firing of the orbital maneuvering system engines. This firing is called the deorbit burn. Time of ignition (TIG) is usually about an hour before landing. The burn lasts three to four minutes and slows the shuttle enough to begin its descent.

Below are some of the key events that take place at each milestone prior to touchdown.

Note: Times, distances and speeds can vary according to a variety of factors such as mission inclination, trajectory and glide slope.

TIG-4 hours
Crew members begin preparations for landing. The orbiter's onboard computers are configured for entry, as is the hydraulic system that powers the orbiter's aerosurfaces -- its rudder speed brake and wing elevons.

TIG-3 hours
The payload bay doors are closed. Mission Control gives the commander the "go" for Ops 3, the portion of the orbiter's flight control software that manages entry and landing.

TIG-2 hours
Starting with the commander and pilot, the flight crew members don their orange launch and entry suits and strap into their seats. 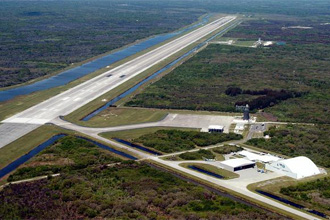 Image to right: This aerial photo shows the runway at Kennedy Space Center's Shuttle Landing Facility at left. In the foreground is the parking apron with the orbiter mate/demate tower, the hangar and other storage facilities, and the tow-way stretching from the runway to the lower right. The control tower is located in a grassy area farther north, near the runway's midpoint. Image credit: NASA/KSC

DEORBIT BURN
The orbiter and crew are officially on their way home.

During reentry and landing, the orbiter is not powered by engines. Instead, it flies like a high-tech glider, relying first on its steering jets and then its aerosurfaces to control the airflow around it.

Landing-30 minutes
Roughly half an hour after the deorbit burn, the orbiter will begin to encounter the effects of the atmosphere. Called entry interface, this point usually takes place at an altitude of about 80 miles, and more than 5,000 statute miles from the landing site.

Early in reentry, the orbiter's orientation is controlled by the aft steering jets, part of the reaction control system. But during descent, the vehicle flies less like a spacecraft and more like an aircraft. Its aerosurfaces -- the wing flaps and rudder -- gradually become active as air pressure builds. As those surfaces become usable, the steering jets turn off automatically.

To use up excess energy, the orbiter performs a series of four steep banks, rolling over as much as 80 degrees to one side or the other, to slow down. The series of banks gives the shuttle's track toward landing an appearance similar to an elongated letter "S."

As the orbiter slices through the atmosphere faster than the speed of sound, the sonic boom -- really, two distinct claps less than a second apart -- can be heard across parts of Florida, depending on the flight path.

Landing-5 minutes
The orbiter's velocity eases below the speed of sound about 25 statute miles from the runway. As the orbiter nears the Shuttle Landing Facility, the commander takes manual control, piloting the vehicle to touchdown on one of two ends of the SLF.

As it aligns with the runway, the orbiter begins a steep descent with the nose angled as much as 19 degrees down from horizontal. This glide slope is seven times steeper than the average commercial airliner landing. During the final approach, the vehicle drops toward the runway 20 times faster than a commercial airliner as its rate of descent and airspeed increase. At less than 2,000 feet above the ground, the commander raises the nose and slows the rate of descent in preparation for touchdown.

Landing-15 seconds
The main and nose landing gear are deployed and locked in place.

Touchdown!
The orbiter's main landing gear touches down on the runway at 214 to 226 miles per hour, followed by the nose gear. The drag chute is deployed, and the orbiter coasts to a stop.