External Tank (ET) Gaseous Oxygen Vent Arm
Overview: Attached between the 207-foot and 227-foot levels is a retractable arm and vent hood assembly. The arm truss section measures 65 feet long from tower hinge to vent hood hinge. The 13-foot wide vent hood also is known as the "beanie cap." Heated gaseous nitrogen is pumped into the hood to warm the liquid oxygen vent system at the top of the external tank. This prevents oxygen vapors that are exiting the vent louvers from condensing water vapor in the surrounding air into potentially damaging ice. 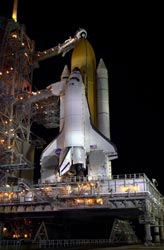 Image at left: With the rotating service structure rolled back, Space Shuttle Endeavour stands ready for launch on mission STS-113. Above the golden external tank is the vent hood (known as the "beanie cap") at the end of the gaseous oxygen vent arm. Vapors are created as the liquid oxygen in the external tank boil off. The hood vents the gaseous oxygen vapors away from the space shuttle vehicle. The orbiter access arm extends from the fixed service structure to the crew compartment hatch, through which the STS-113 crew will enter Endeavour. Credit: NASA/KSC

About two-and-a-half minutes before launch, the vent hood is raised to clear the external tank, a 25-second procedure. The arm is retracted against the fixed service structure at about one minute, 45 seconds before liftoff. It is not latched in the event there is a hold, in which case the arm can be re-extended and the beanie cap again lowered onto the external tank.

The arm is latched when the solid rocket booster ignition signal is given at T minus zero minutes.
NASA's John F. Kennedy Space Center
› Back To Top