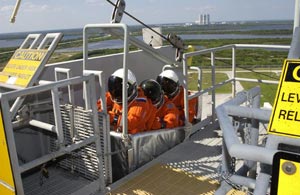 Image to left: The Expedition 6 crew members practice emergency egress from the 195-foot level of the fixed service structure on Launch Pad 39A. In the slidewire basket are (from left) cosmonaut Nikolai Budarin, astronaut Donald Pettit and Commander Ken Bowersox. The crew, travelers on Mission STS-113, will be replacing Expedition 5 on the International Space Station. Credit: NASA/KSC

The system includes seven baskets suspended from seven slidewires that extend from the fixed service structure to a landing zone 1,200 feet to the west. Each basket can hold up to three people. A braking system catch net and drag chain slow and then halt the baskets sliding down the wire approximately 55 miles per hour in about half a minute.

Also located in the landing zone is a bunker, with an M-113 armored personnel carrier stationed nearby.
NASA's John F. Kennedy Space Center
› Back To Top