Liquid Oxygen and Liquid Hydrogen Storage
Overview: Liquid oxygen used as an oxidizer by the orbiter main engines is stored in a 900,000-gallon tank on the pad's northwest corner, while the liquid hydrogen used as a fuel is kept in an 850,000-gallon tank on the northeast corner. The propellants are transferred from the storage tanks in vacuum-jacketed lines that feed into the orbiter and external tank via the tail service masts on the mobile launcher platform. 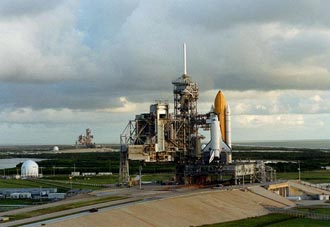 Image above: This aerial photo captures Launch Pads 39B (left) and 39A (right). Space Shuttle Discovery waits on pad 39A for launch on mission STS-92 Oct. 5, 2000. The ball-shaped structures at left of the pads are storage tanks of the cryogenic liquid propellants for the orbiter's main engines. Credit: NASA/KSC

The liquid oxygen tank functions as a huge vacuum bottle designed to store the cryogenic fluid at a very low temperature -- less than minus 297 degrees Fahrenheit. It is transferred to the pad by one of two main pumps capable of pumping 1,300 gallons per minute.

The lighter liquid hydrogen is stored in a vacuum bottle located in the northeast corner of each pad. It must be kept at an even lower temperature than the liquid oxygen: minus 423 degrees F. To move the liquid hydrogen to the pad, a small amount is allowed to vaporize, and the gas pressure exerted from the top of the tank pushes the fuel into the transfer lines.