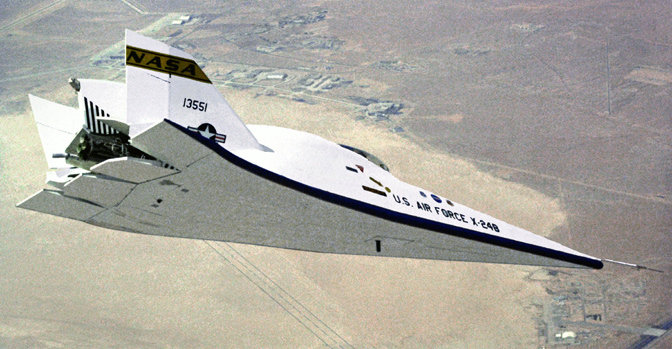 (Editor's Note: Although NASA's Dryden Flight Research Center at Edwards Air Force Base in Southern California's high desert served as the space shuttle's original landing site and later as the primary alternate landing site after Kennedy Space Center's Shuttle Landing Facility was established and certified, the center also played a significant role in the shuttle's development. As the Space Shuttle Program nears its conclusion, this series of historical retrospectives explores some of the center's contributions to the shuttle's design, development and flight validation. In this first article, Dryden historian Peter Merlin recalls how precision landings by the X-24B lifting body led to the decision by shuttle designers to not include jet engines on the shuttle to aid landing approaches.) 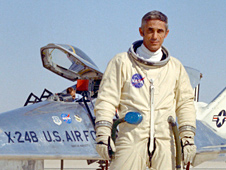 NASA research pilot John Manke with the X-24B lifting body after a 1973 flight. (NASA photo) NASA research pilot John Manke worked through his prelaunch checklist while the X-24B lifting body hung beneath the wing of a modified B-52 cruising at an altitude of 45,000 feet over California’s Mojave Desert. When the countdown reached zero, the X-24B – its narrow delta shape and flat belly had earned it the nickname the “flying flatiron” – dropped away.

Seconds later, Manke ignited the vehicle’s four-chamber XLR11 rocket engine and climbed to a peak altitude of 60,000 feet. As the craft nosed over, he scanned the desert below looking for a narrow gray strip of concrete near the edge of Rogers Dry Lake at Edwards Air Force Base.

Because lifting bodies have a very low lift-to-drag ratio -- some pilots felt the experience was akin to flying a brick -- all previous landings had been made on the 44-square-mile lakebed expanse where there was significant margin for error. But this flight on Aug. 5, 1975 would be different: for the first time, a lifting body would touch down on Edwards' 15,000-foot-long, 300-foot-wide concrete runway. Manke was aiming to make a precise landing on a spot about a mile down the airstrip. 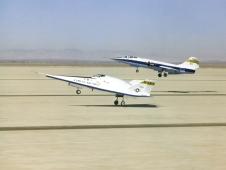 This 1975 photo shows the X-24B lifting body, with a NASA F-104 close beside, gliding to a landing on Rogers Dry Lake at Edwards Air Force Base, as space shuttle orbiters would do several years later. (NASA photo) Seven minutes after launch from the B-52, the X-24B was lined up for final approach. Manke touched down precisely on target moments after lowering the landing gear. The demonstration proved that a low lift-to-drag vehicle like the lifting bodies or the coming space shuttle could approach from high altitude or low-Earth orbit and land like a conventional airplane.

Early manned spacecraft designs enabled ballistic entry into the atmosphere, similar to that of a missile warhead. This type of entry resulted in high G-loads and intense heating due to atmospheric friction. Hence, Mercury, the first U.S. manned space vehicle and the only one to use a strictly ballistic entry trajectory, was designed so a single crewmember could lie on his back facing away from the direction of flight. Final deceleration was achieved through use of a parachute, and the capsule landed in the ocean.

Though a capsule could carry a human into space, it had to return to Earth beneath a parachute for an ocean splashdown; a lifting body allowed a pilot to fly home and land on a runway. Advantages of the lifting-body design included reduced mission costs (because the expense of an ocean recovery was eliminated) and greater cross-range maneuvering capability.

"The lifting-body 'footprint' for a hypersonic vehicle – that is, one with a speed of Mach 5 or greater and a lift-to-drag ratio of 1:5 – includes the entire western United States as well as a major portion of Mexico," said the late R. Dale Reed, a Dryden engineer and early proponent of the lifting-body concept. 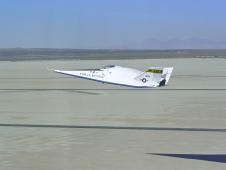 The X-24B lifting body flares on final approach above Rogers Dry Lake, moments before extending its landing gear for touchdown in this 1975 photo. The X-24B is on public display at the National Museum of the Air Force, Wright-Patterson AFB, Ohio. (NASA photo) By 1974, the space shuttle was well into the design phase and program engineers had already selected a winged vehicle rather than a lifting body as the model for the reusable spacecraft. Throughout much of the planning stage, shuttle program engineers had struggled over what to do with the orbiter once it was back in the atmosphere: should it be strictly a glider, or should it have engines that would enable flight to either a planned or an emergency landing site? The consensus moved increasingly toward the addition of pop-out jet engines for use following re-entry, despite more than a decade of successful unpowered lifting-body landings accomplished at Dryden.

Manke and Air Force test pilot Mike Love concluded that use of a lifting body could resolve any lingering concerns by shuttle engineers over landing a re-entry vehicle unpowered. In January 1974, using an F-104 and a T-38, Manke and Love simulated more than 100 lifting-body landing approaches to the main runway at Edwards. Two weeks after Manke’s Aug. 5, 1975 runway landing in the X-24B, Love duplicated the feat.

"These precise touchdowns demonstrated to the shuttle program that a configuration with a comparatively low lift-to-drag ratio could land accurately without power, thereby convincing the shuttle authorities that they could dispense with the air-breathing jet engines originally planned for the orbiters," Reed later wrote.

"We now know," Manke said later, "that concrete runway landings are operationally feasible and that touchdown accuracies of plus or minus 500 feet can be expected."

The engineering and flight-test work accomplished at Dryden, as well as at Ames and Langley field centers, was crucial in eliminating the excess weight and inherent hazards associated with jet engines and the fuel necessary to power them. Reducing the shuttle's structural weight also increased its payload capacity.