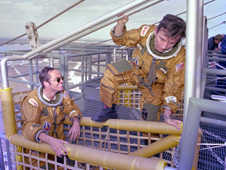 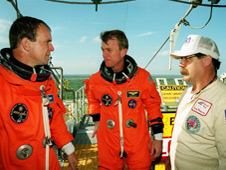 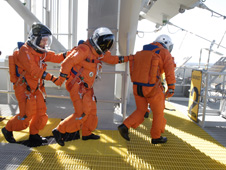 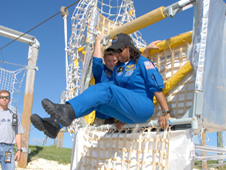 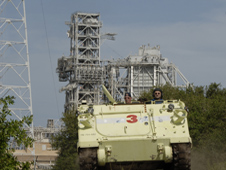 Image: STS-127 Commander Mark Polansky takes his turn driving the M-113 armored personnel carrier. An M-113 is available to transport the crew to safety in the event of a contingency on the pad before their launch. Photo credit: NASA/Kim Shiflett
› Larger Image 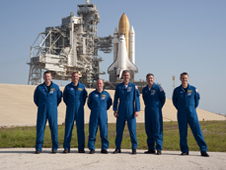 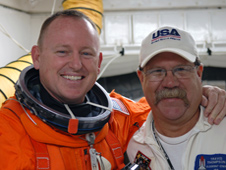 
3, 2, 1 and … and well, everything comes to a halt. It's not an aborted liftoff; it's TCDT, the Terminal Countdown Demonstration Test!

Prior to every launch, the current mission's astronauts and ground crew participate in launch-related activities at NASA's Kennedy Space Center in Florida, for their final on-site preparations before liftoff.

During a few days at Kennedy, the flight crew checks the fit of their spacesuits, practice emergency evacuation procedures at the launch pad, check out their mission's cargo in the shuttle's payload bay, review firefighting methods, and participate in briefings on security and range safety.

Closeout Crew Lead Travis Tod Thompson, with United Space Alliance, has been assisting each mission's crew members for more than 27 years during TCDT and on launch day. Thompson's first assignment was supporting the crew of Challenger's STS-8 mission in 1983.

TCDT frequently is the first time members of the crew have had an opportunity to see the flight hardware and launch pad. Until this time training has been on simulators and with computer programs at their home base at NASA's Johnson Space Center in Houston.

This training allows them to familiarize themselves with the vehicle, become acclimated with the safety equipment and procedures and become comfortable with the White Room and the emergency measures that may have to be put into action, if necessary, on launch day.

"It's great for us to get comfortable with them (the astronauts) during TCDT and for them to get comfortable with us and their surroundings -- it's just a big help. The dress rehearsal helps to get rid of a lot of butterflies, plus gives us more time with them to learn what they're going to need on launch day," said Thompson. "Anything we can do to make launch day go smooth is well worth it."

The astronauts also receive instruction on hopping into the launch pad's slidewire baskets and driving the M-113 armored personnel carriers as part of their emergency pad escape training.

According to Thompson, the slidewire baskets were part of the pad's emergency egress system since STS-1 but have never been used for an emergency. But if the White Room had to be evacuated quickly, fire nozzles that spray heavy amounts of water would activate and the teams would only be able to see their feet.

Painted on the open grating of the pad floor is a bright yellow path marked with black chevrons or arrows, which point the way to the slidewire baskets. Thompson mentioned that these path markings have been humorously referred to as "the yellow brick road."

Another aspect of TCDT, explained Thompson, is the M-113 armored personnel carrier emergency egress vehicle driver training. Instruction is provided by Kennedy's fire chief to each astronaut who gets a chance to ride in and drive the M-113. Typically, Thompson joins the crew in the field, and this is the first time he meets them.

"This exercise gives me a good time to get to know the crew a little bit on a comfortable basis -- before we really have to do a lot of work. And it's fun for them and they like it," Thompson said.

In addition to pad and field training, the commander and pilot practice touch-and-go landings in NASA's Shuttle Training Aircraft -- Gulfstream jets which have been modified to simulate the orbiter's unpowered, high-speed glide -- at Kennedy's Shuttle Landing Facility.

TCDT has changed and evolved over the years, recalls Thompson. "We've grown in crew size, from 2 crew members on STS-1 through 5, and then it was expanded to four, and then up to seven."

Thompson recalled that one of his best shuttle memories happened on his birthday a few years ago -- but it was also launch day. He was waiting in the pad's White Room for the flight crew to arrive in the Astrovan. Typically after arrival, the astronauts hop into the pad's elevator for the short ride up to the 195' level. Thompson and his team were going through their last-minute checks while waiting for the crew to come out of the elevator.

"So they're out on the level here and normally the commander will come in," said Thompson." Well, that didn't happen and one of my guys came in instead to say 'the commander wants to see you outside.' I thought, 'uh oh, something's wrong,' so I trot on out and found they'd formed a semi-circle around me and the crew sang "Happy Birthday" to me. That was an awesome time and I enjoyed that very much."

There are many pretest briefings to attend and the test team briefs Thompson on what to expect and what he and his Closeout Crew will be involved in during the mission's TCDT. The training is tailored around the exact number of crew members there are, a process that takes many weeks to schedule. "But when the astronauts finally arrive at Kennedy, everything is ready for their training," Thompson said.

Once everything is in place, Thompson's crew shows up at the launch pad at about 5 a.m. for the full launch dress rehearsal and prepares the White Room, located in the pad's rotating service structure, for the astronauts' arrival at about three hours later.

That's when the launch countdown moves into its final phase. It takes about 50 minutes for the flight crew to board the vehicle, the hatch to be closed and then they run through all of the operations and communication checks of a real launch, right down to a mock engine start.

"There were some instances when it was the first time a member of the flight crew had even seen the vehicle in person, and it was a big excitement for them," Thompson said. "So TCDT's a great time for us to get to know what their comfort level is and what they're going to need on launch day. It makes the day go smoother."


Proud of His Life's Work

"This is all I've ever wanted to do. I came here a little over 31 years ago and I've loved every minute of it -- every bit of working here -- we've grown to be a family and it's been a great experience."

- Travis Tod Thompson
Thompson talked about a tradition he's followed through the years at the pad on launch day. He tells of a large pipe that has liquid oxygen running through it that frosts up and develops an ice buildup. Before the flight crew arrives, Thompson scrapes the STS mission number in the frost along with a "thumbs-up" print in the frost.

"It's kind of our way of telling them we're behind them...kind of a personal note to them. It's one of the cool things about the pad that many people don't know about. And it doesn't happen every day. It only happens on launch day -- it's special."

It's evident how much satisfaction Thompson and his team gets out of the work they do keeping the astronauts safe and comfortable during training and on launch day.

"I take a lot of pride in that, and I'm happy that I can say that some of them are my friends."