A T-38 is silhouetted against the sun in flight. Photo courtesy of Terry Virts
› Larger image 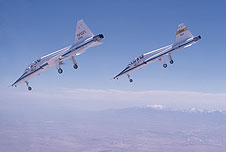 A pair of T-38s dive toward a runway at Edwards Air Force Base in Calif., on a steep approach like the one the shuttle uses on approach. Photo courtesy of Story Musgrave
› Larger image 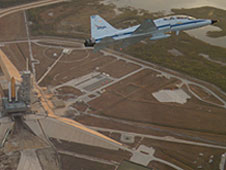 A T-38 banks over Launch pad 39A at NASA's Kennedy Space Center in Florida as the crew arrives for the Terminal Countdown Demonstration Test for STS-130. Photo courtesy of Terry Virts
› Larger image 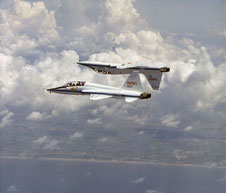 A pair of T-38s fly in formation over Galveston Beach in Texas, showing some of the aerobatic abilities of the T-38. Photo courtesy of Story Musgrave
› Larger image 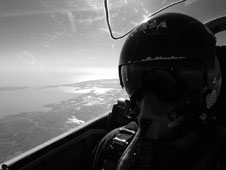 Astronaut Terry Virts as he pilots the T-38 to Kennedy for TCDT. Photo courtesy of Terry Virts
› Larger image 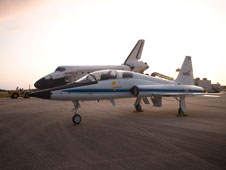 The T-38 and space shuttle are not easily confused, but they work well together. Photo courtesy of Story Musgrave
› Larger image

Years before the space shuttle would glide home to a safe touchdown on runways in California and Florida, astronauts pitched the noses of T-38 jet trainers toward the same runways to find out what it would look like to land a spacecraft in such a way.

The T-38 remains a fixture for astronaut training more than 30 years later because the sleek, white jets make pilots and mission specialists think quickly in changing situations, mental experiences the astronauts say are critical to practicing for the rigors of spaceflight.

"It's actually our most important training that we do as astronauts," said Terry Virts, who flew as the pilot of STS-130 aboard shuttle Endeavour. "It’s the one place where we're not in a simulator. It's real flying and if you make a mistake, you can get hurt or break something or run out of gas. There are a lot of things that happen real-world in a T-38 that don't happen in the simulator."

"You're in a different world, a dynamic world, it doesn't matter whether it's a shuttle or a T-38," said Story Musgrave, a six-time shuttle flyer who posted thousands of hours in the T-38 and instructed others how to fly it, too. "It's understanding the rules, how to live within the rules."

Powered by two afterburning General Electric J85 engines, a T-38 can fly supersonic up to Mach 1.6 and soar above 40,000 feet, about 10,000 feet higher than airliners typically cruise. The plane can wrench its pilots through more than seven Gs, or seven times the force of gravity. That's enough to make simply lifting hands a feat of strength and breathing a labored chore. It'll make one's neck feel like it is balancing a cinder block. It's also more than enough to make the average person black out.

"The T-38 is a great aircraft for what we need at NASA because it's fast, it's high-performance and it's very simple," Virts said. "It's safe and it's known. So compared to other airplanes, it's definitely one of the best."

Made by Northrop, the T-38 was first fielded by the U.S. Air Force in 1961 as an advanced jet trainer, and it still serves the Air Force in that capacity. It was the preferred aircraft of the Air Force Thunderbirds during the 1970s, when the T-38s starred as the feature performers in air shows around the world.

A T-38's NASA paint scheme is largely white with a blue stripe down the length of its narrow fuselage, earning it the occasional nickname "white rocket." But mostly they're called T-38s or just "38s." NASA's small fleet is housed mainly at Ellington Field outside NASA's Johnson Space Center where a team of mechanics looks after them.

"Staying ahead of the jet" is the pilot-speak for constantly calculating fuel needs, navigation points, mission requirements and dozens of other things needed to fly successfully.

The Air Force pilots who would become astronauts and fly the shuttle learned the finer points of jet aircraft at the controls of T-38s. Virts, for example, learned to fly a T-38 when he was a 21-year-old lieutenant.

"It pulls Gs not quite like a frontline fighter," Virts said. "It's fast, but frontline fighters are faster, but the one thing the T-38 can do amazingly well is roll. You jam the stick to the side and it rolls really, really fast. That's something that on your first flight they always want to demo to you. At first, you're like, 'Oh, cool!' and then after a bunch of rolls, you're like, 'Alright, that's enough rolling the airplane.' "

Anyone who didn't fly a T-38 before they got to NASA learned to fly it once they joined the astronaut corps. Basic astronaut training includes T-38 courses, and mission specialists, who do not sit at the controls of a space shuttle, have to record four hours a month at the stick of a T-38. Commanders and pilots are required to fly the T-38 for 15 hours a month to keep up their proficiency.

"It requires you to think fast," Virts said.

The jet, with its thin, 25-foot-long wings, is seen most often flying the astronauts to NASA's Kennedy Space Center the week of launch. On their way to the Shuttle Landing Facility, the crews typically fly by the shuttle stack on the launch pad, banking slightly so the astronauts can look over their shoulders from about 1,500 feet and see their ride into space.

"One of the most fun things to do is to fly down to the Cape and see your space shuttle," Virts said.

But there is more to the planes than transportation. The aircraft roar around Kennedy on launch and landing day when astronauts use them to scout weather conditions in the hours before liftoff.

Any footage of early shuttle landings includes more than a glimpse of a few T-38s as they followed the shuttle down to a runway. From their vantage points around the shuttle, the chase pilots could radio the shuttle crews about the condition of the spacecraft and what to expect in the approach. They also could mirror the shuttle all the way through its approach on a glide path that is seven times steeper than an airliner's.

Taking a lightweight, nimble aircraft designed to teach pilots to fly high-performance fighters and making it into something with as much drag as a 110-ton glider took some modification and plenty of certification flights to prove it was safe. For the T-38, the modifications included and extra-large set of airbrakes on the bottom of the aircraft. Then astronauts had to prove it could fly safely with the landing gear down and those airbrakes open.

With those steps in place, astronauts could point a T-38s nose down at the ground and fly toward the runway faster than 300 mph. The flying is not an exact physical simulation; the astronauts use the Shuttle Training Aircraft, or STA, for that. But flying the approach in a T-38 shows them what a landing in the shuttle will look like, time and time again.

"As pilots we fly in the STA to learn how to land the shuttle, but the most important flying that we do as astronauts is in the T-38, because the skills we learn there apply generically to all aspects of our jobs," Virts said.

The rules of flying also cross from T-38 to spacewalking, even though mechanically there are no similarities. After all, a spacesuit doesn't have a control stick and rudder pedals.

However, on the mental side, a T-38 and a spacesuit have critical supplies that cannot be allowed to run out. That means the operators in both cases have to follow their progress carefully and make sure they aren't using too much fuel, in the case of the T-38, or running low on oxygen, in the case of the spacesuit.

"It's not the same, but it's being an operator," Musgrave said. "It's procedures, and it's checklists. It's getting on with it and it's learning the program and it's doing it right. It's all those things. It'll help you there, it'll help you everywhere else, too."

Joining the agency in 1967, Musgrave would take the planes on checkout flights to make sure a jet could handle the demanding requirements of flying at the hands of test pilots.

"It's the best flying to me because you do absolutely everything the airplane can do," Musgrave said. "That's very good flying."

The T-38 is hailed by the astronauts for its simplicity, safety and reliability. It has surprised its pilots on a few occasions, though.

One of Musgrave's experiences came during a T-38 check flight when the aircraft was supposed to hold itself level in a stall, which is when the wings are no longer providing lift. In Musgrave's case, the aircraft rolled over onto its back.

"To be fully stalled and inverted with the wheels pointing skyward in a swept-wing, high-performance aircraft is more than uncomfortable, it's frightening ," he wrote in his book, "The NASA Northrop T-38 Talon."

Musgrave released the control stick and let the jet flop around in the air and sort itself out until it pointed its nose down and once again became flyable. He performed the same test in the same jet with the same results repeatedly after the mechanics could not find out what was wrong. He took the same plane out again years later and it passed the stall test completely.

For astronauts, the seating arrangement, with one pilot behind the other, is the same as they encounter on the flight deck of a shuttle, where a pair of mission specialists, one serving as flight engineer, sit behind the commander and pilot.

Just as they would during a shuttle launch and landing, the astronaut in the front seat of the T-38 handles the flying and the mission specialist in the back seat passes on important information, talks to the control towers and takes care of aspects of navigation.

"The reason for the T-38 is spaceflight readiness training," Virts said.

Musgrave describes the T-38 as "a classic, timeless beauty."

"If you didn't know what a shark was and I showed you a picture of a shark and asked you, 'Can it swim?' Of course it can," Musgrave said. "A thousand years from now, you'd say the T-38's a classic, but it'll be beautiful then, too."