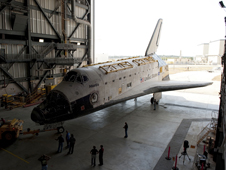 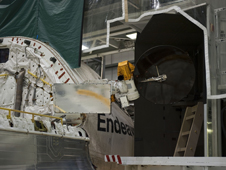 By the end of this year, NASA's space shuttles will be in their new homes.

Recently, the shuttles were on the move as part of the transition and retirement (T&R) activities at NASA's Kennedy Space Center in Florida.

On Feb. 1, NASA Vehicle Manager for T&R Bart Pannullo watched as shuttle Endeavour was backed out of the Vehicle Assembly Building (VAB) and towed to Orbiter Processing Facility-2 (OPF-2).

The next day, shuttle Atlantis made an appearance outside the VAB as it was towed from the VAB transfer aisle into high bay 4 for temporary storage. Atlantis is being prepared for public display at the Kennedy Space Center Visitor Complex in 2013.

"It's been two beautiful days here for these operations and seeing people I haven't seen in a while," Pannullo said. "I'm not taking these events for granted."

Endeavour was moved to OPF-2 so that technicians can continue to prepare it for display. The shuttle will remain in the OPF until it is ready to be ferried to the California Science Center in Los Angeles in the fall.

Once inside the facility, Endeavour was leveled and safed. Then, water and Freon from lines in the shuttle's midbody were offloaded. The orbital maneuvering system (OMS) pods and forward reaction control system (FRCS) were delivered to the Hazardous Maintenance Facility (HMF) on Feb. 6 from White Sands, N.M. The FRCS was uncrated and transported to OPF-2 on the same day and was installed on Endeavour on Feb. 8. The OMS pods remain at the HMF and are scheduled to be installed on Endeavour in March.

Pannullo said that while Atlantis is in the VAB, technicians will be working in the aft compartment to remove components that may be used in future programs, as well as continuing to safe the spacecraft.

Future work on Atlantis includes reinstallation of its FRCS and OMS pods once it is moved back to the OPF in late March.

Replica Shuttle Main Engines also will be installed, and safing of the pyrotechnic systems will be completed.

Atlantis then will be configured for its display site, and prepared for its short trip to the visitor complex just down the road in early 2013.

More Information:
Discovery, atop a NASA Shuttle Carrier Aircraft (SCA) modified 747 jet, will arrive at Dulles International Airport in Virginia on April 17 and then be transported to the Smithsonian's Udvar-Hazy Center on April 19.

Endeavour, taking the final SCA "ferry flight" ever, currently is scheduled to fly to Los Angeles this fall.

For more information, go to http://www.nasa.gov/transition.

Discovery is in OPF-1, where processing is quickly coming to an end as it is being readied for display at the Smithsonian's National Air and Space Museum, Steven F. Udvar-Hazy Center in Chantilly, Va.

"We also are doing the final configuration and closeouts to ensure the vehicle is ready to ferry," Stilson said. "Although Discovery is not leaving Kennedy until mid-April, it is scheduled to leave the OPF for the last time in March."

Stilson said Discovery always will hold a special place in her heart, but she also is enjoying her time with the other shuttles.

"I continue to be impressed by the dedication and devotion of the team working to ensure Discovery, Atlantis, Endeavour and Enterprise are delivered to their new homes in the best possible condition," Stilson said.

"There is a great sense of pride and appreciation for the opportunity to work with so many great people on the greatest space program in the world," Pannullo said.

"This will be a difficult transition for all of us," Stilson acknowledged, "but we can feel good knowing their new families will love them as much as we do and will care for them as well as we have for the past 30 years."
Linda Herridge
NASA's John F. Kennedy Space Center
› Back To Top