Grow Text SizeShrink Text Size
All Eyes on the Shuttle
Perhaps one of the most impressive images is that of a space shuttle lifting off the launch pad. But more than just an impressive sight, images play a critical role in shuttle flight safety. Each successful mission depends heavily on still and video images that allow the launch team to closely scrutinize the spacecraft before and after liftoff. Long before the main engines fire and the solid rocket boosters ignite, the entire shuttle stack has been photographed and monitored with TV cameras as the countdown clock ticks down. The Final Inspection Team plays a large part in providing prelaunch imagery and analysis to the launch team during the critical time after the huge, orange external fuel tank has been filled with super-cold liquid oxygen and liquid hydrogen. 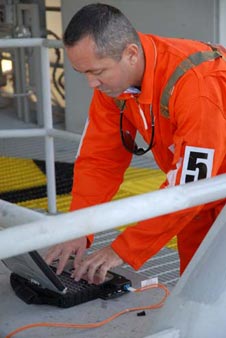 Image above: It's Final Inspection Team member Ivan Bush's job to use a laptop to send images back to the Launch Control Center during countdown. Image credit: NASA/Cheryl Mansfield › View larger image

"The images we take on the Final Inspection Team are sent back to the Launch Control Center," says Tom Ford, NASA's lead for the inspection team. "When we give the report to the Mission Management Team, and to the launch director and shuttle project engineer, they can look at our imagery, and in particular the ones we single out and tell them that we know there is a problem here, and they can do analysis of their own on those images." The trained eyes of the team members can spot potential problems that might go undetected without their on-the-spot inspection. "Imagery is really what we're all about," says team photographer Ivan Bush, a United Space Alliance employee who transmits the images from the pad back to launch control. "We're responsible for getting the launch team, the launch director and the crew assessment via imagery of how the space vehicle is ready to go for flight." But it was only a few years ago that the team gained the ability to send the digital images directly from the launch pad to launch control via laptop computer. Prior to that, the digital cards had to be hand delivered by the team. It's not that sending images from a laptop computer was a revolutionary idea. But it had been impossible since wireless transmission wasn't feasible with a fully fueled space shuttle standing just feet away. "We looked into sending images back wirelessly, but our safety requirements wouldn't allow that," explains Ford. "So we said OK, we have to have this. Let's think of a bare-bones system that will work while meeting the safety requirements, and we came up with the (fiber-optic) drop." 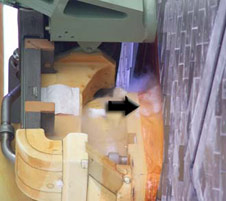 Image above: On the second trip to the launch pad during the STS-120 countdown, the inspection team was able to send back this image of the dissipating area of ice (indicated by the arrow), giving launch managers time to make a "go" for launch call. Image credit: NASA/Final Inspection Team › View larger image

The new capability was put to the test immediately in the fall of 2007, as the countdown clock clicked down toward the launch of space shuttle Discovery on mission STS-120. Launch managers had to make the "go/no-go" decision. Before making the call, they needed to carefully examine a small ice build-up on the external tank's liquid hydrogen umbilical that had been spotted by the inspection team. The team members used the new fiber-optic capability to send back their photos, including some showing the ice buildup. In a rare move, the launch managers asked inspection team members to go back to the pad for a second look and once again send back updated photos of the now-dissipating ice. With the analysis done, the launch team made the call: Discovery was "go" for launch, and the shuttle and crew embarked on a dramatic and highly successful 15-day mission to the International Space Station. However, the launch team isn't limited to only the still images sent back from the pad. The team uses a host of sources to monitor the shuttle stack before and after launch. "In the Launch Control Center we have the ice-frost console, and we continuously monitor upward to 135 different camera locations," says Bush."Those assets are controlled by NASA and other contractors. Some are basically large telescopes and they are able to film the orbiter several minutes into its flight profile." 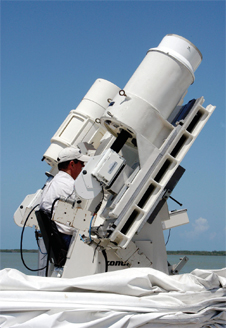 The variety of trackers used at the different camera sites are for short-range tracking (T-10 through T+57 seconds), medium-range (T-7 through T+110 seconds), and long-range (T-7 through T+165 seconds). Around the launch pad, cameras focus on the external tank, solid rocket boosters and the shuttle itself. For miles up and down the coast, tracking cameras and long-range optical tracking systems capture ascent imagery. "We have about 60 cameras within the actual perimeter of the launch pad -- some are infrared, some are HD, some are standard cameras, some are at higher and slower speed," Bush explains. "A lot of them are at about 400 frames per second so we can catch a very, very slow behavioral aspect of each vehicle component, because some components we want to watch how they work the moment they are supposed to go to work. And we watch them frame-by-frame." The monitoring isn't confined to just land-based imaging. At sea, ship-mounted wideband and Doppler radar tracking systems are used to detect debris during launch and ascent. Cameras mounted aboard the shuttle stack itself help give a close-up view of the climb as the boosters and external tank perform their jobs and then fall away as the shuttle achieves orbit. Once in space, the astronauts themselves use visual inspections to ensure the vehicle sustained no damage during its ascent. As the final space shuttle lifts off Launch Pad 39A and pierces the sky over NASA's Kennedy Space Center in Florida, technology and trained eyes will once again be keenly focused on its amazing ride to space, helping to ensure a safe and successful mission as the shuttle era draws to a close. › Learn more about shuttle launch imagery. PDF 10 MB Cheryl L. Mansfield
NASA's John F. Kennedy Space Center
› Back To Top