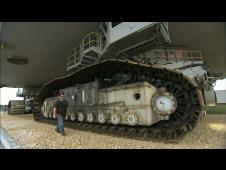 Video: Learn more about the people and machines that move each space shuttle to the launch pad.
› View This Video 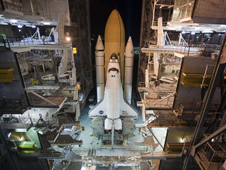 Image above: In the Vehicle Assembly Building at NASA's Kennedy Space Center in Florida, a crawler-transporter begins to roll space shuttle Atlantis out of High Bay 1 on its 3.4-mile journey to Launch Pad 39A for STS-132. Photo credit: NASA/Amanda Diller
› View Larger Image 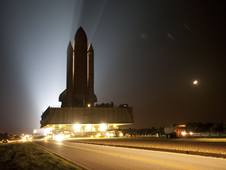 Image above: Atlantis casts shadows into the darkened sky as it moves along the crawlerway. Photo credit: NASA/Amanda Diller
› View Larger Image 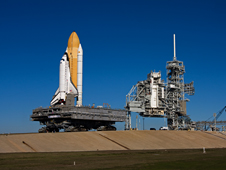 Image above: A crawler-transporter keeps shuttle Endeavour level as it travels up the five percent grade to the base of Launch Pad 39A before the STS-130 launch. Photo credit: NASA/Amanda Diller
› View Larger Image 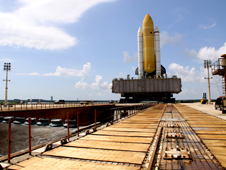 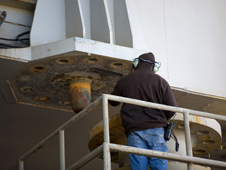 Image above: An aerospace technician prepares to secure shuttle Endeavour to the pad after the STS-130 rollout. The pin extending from the mobile launcher platform is guided toward the pedestal below. Photo credit: NASA/Amanda Diller
› View Larger Image 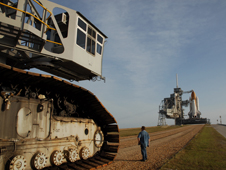 Image above: After delivering shuttle Discovery to the launch pad for the STS-124 mission, the crawler-transporter is moved to the foot of the pad. Photo credit: NASA/Troy Cryder
› View Larger Image

Long before the final countdown and the thundering ride into Earth orbit, a space shuttle's mission begins with a road trip.

The slow-motion "rollout" from Kennedy Space Center's Vehicle Assembly Building to Launch Complex 39 is the first journey each space shuttle takes once it is attached to its external fuel tank and solid rocket boosters. While the shuttle is the star of this show, the behind-the-scenes workhorse is the massive, tracked crawler-transporter carrying the vehicle and mobile launcher platform.

"We always look forward to rollout," says Bob Myers, system engineer for the crawler. "We work for weeks at a time getting the crawler ready, making sure everything's ready to go, so we're able to perform our mission."

The six-and-a-half-hour rollout of space shuttle Atlantis for its final planned spaceflight, STS-132, was a perfect example of the ride every shuttle has taken on the road to launch. We'll take you through the entire roll of Atlantis, which began its move to Launch Pad 39A on April 21, 2010.

Getting Ready to Roll

Mated to its external tank and twin solid rocket boosters, Atlantis looms high above the surface of the battleship-gray mobile launcher platform inside the Vehicle Assembly Building's High Bay 1. The platform and crawler have been transferred from "shore" to onboard power in preparation for rollout, but Atlantis isn't going anywhere just yet.

A shuttle and its launch platform together weigh a whopping 12 million pounds -- all of which must be lifted off of six 22-foot-tall pedestals and carried away on the crawler's back. The crawler alone is a nearly 6-million-pound load.

"A couple of us were sitting around about quarter to midnight or so, and an e-mail came in from our launch director, Mike Leinbach, and he said, 'You guys have got to come out here and see this.' And we ended up staying for hours, because it is absolutely incredible to see."
- Ken Ham, STS-132 Commander

The jacking, equalization and leveling system, or JEL, raises the crawler's deck until it makes full contact with the underside of the launch platform, then lifts the entire load off the pedestals. An engineer in the crawler's control room makes manual adjustments to keep a level surface for the shuttle.

From the floor of High Bay 1, the jacking process is hard to see; the hardware moves about an inch per minute. Observers at each pedestal watch closely as the platform rises. It takes 20 to 30 minutes for the entire platform to clear the pedestals.

Launch Director Mike Leinbach gives the final "go" to start the trek to the launch pad. At 11:31 p.m., the crawler's eight tracked belts ease forward. Atlantis is on the move.

Standing on the deck of the mobile launcher platform as it leaves the Vehicle Assembly Building feels remarkably similar to watching from the deck of a ship as it leaves port. The walls and access platforms of High Bay 1 fall behind as we inch through the door and out into the night, setting off down the 130-foot-wide crawlerway at top rollout speed: .8 miles an hour.

About 30 people accompany the shuttle on this journey, primarily a team of United Space Alliance crawler engineers/drivers, technicians, diesel mechanics and supervisors. Drivers and console operators rotate between the different stations several times throughout the move, helping them stay focused and alert, and giving them opportunities to stay proficient at every task.

The crawler has identical front- and rear-facing driver cabs, and twin engine rooms, each housing a 2,750-horsepower diesel engine for propulsion and an additional engine for onboard power. Technicians in the pump room and engine rooms keep a close watch on all systems while the entire rollout is monitored from the centrally located control room.

As the shuttle stack lumbers down the road to the pad, the driver in the forward-facing cab is in control of all four of the crawler's treaded trucks. The crawler stays in this steering mode, called "great circle," for most of the trip.

A few hundred Kennedy employees and their families are gathered near the crawler's path, anxious to see Atlantis on its last scheduled trip to the launch pad. They're treated to an additional surprise when the STS-132 astronauts arrive. After a quick visit with the crowd, STS-132 Commander Ken Ham leads his crewmates on board to greet the rollout team and experience part of the ride.

"A couple of us were sitting around about quarter to midnight or so, and an e-mail came in from our launch director, Mike Leinbach, and he said, 'You guys have got to come out here and see this,''' Ham explains. "And we ended up staying for hours, because it is absolutely incredible to see."

Finally, long after midnight, the crowds go home and the xenon lights fade as Atlantis continues on into the darkness.

Atlantis passes through the Launch Pad 39A perimeter gate just before 4:30 a.m. Now comes the tricky part: keeping the shuttle perfectly level while hauling it up a 5 percent incline to the top of the pad's hardstand. There's a nearly 5-foot difference in height between the forward and rear sides of the crawler as it compensates for the slope. The climb up the hill is the most crucial part of the trip.

In the final minutes before docking at the pad, the crawler switches to "independent" steering. This means the driver in the rear-facing cab now is in control of that pair of tread belts. The leading tread belts are driven by crawler engineer Bill Couch, who is standing in front of the driver's seat in the forward-facing cab.

An onboard laser docking system keeps the crawler on a precise path. On the ground, technician Jim Moree uses a surveyor's tool, called a theodolite, to help the drivers align the vehicle above the pad's six pedestals.

The silence in the cab is punctuated only by Moree's voice over the radio as he reads the remaining distance.

He slows the transporter further with each passing inch until the movement is barely perceptible. Motion is stopped when the mobile launcher platform is completely aligned.

Inside the crawler's control room, engineers are watching and making adjustments as the JEL system lowers the platform onto the pad pedestals. Atlantis is "hard down" -- secured in position -- at 6:03 a.m. The launch platform is transferred back to "shore" power, and the crawler retreats from the top of the pad and parks just outside the perimeter gate.

"The most satisfying part is when we're out at the pad, the vehicle's hard down at the pad, and we're bringing the crawler down the hill," says Ray Trapp, manager of the crawler transporter department. "You're looking at the vehicle sitting on the pad, knowing that you and your group played a major part in getting that out there."

As the Space Shuttle Program comes to an end, the crawlers still are going strong after more than 40 years delivering every Apollo-era rocket and space shuttle to the launch site. Trapp and Myers agree the massive machines are expertly designed and well-maintained enough to last decades longer.

"It gives you a real great sense of pride to know you're carrying the nation's space program on your back," Myers says. "There's nothing like it."
Anna C. Heiney,
NASA's John F. Kennedy Space Center
› Back To Top