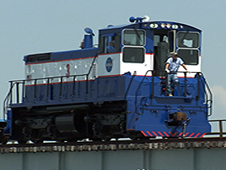 Video: Learn more about the NASA Railroad and its role in the Space Shuttle Program.
› View This Video 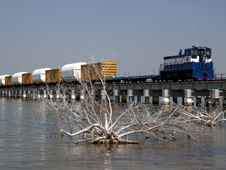 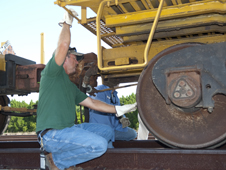 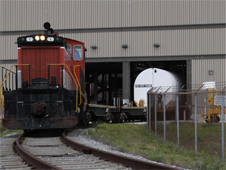 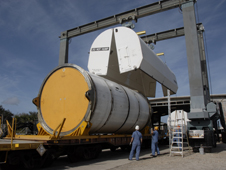 Image above: At Kennedy's railroad yard, a protective cover is being placed over a solid rocket booster segment from the STS-126 launch for the trip back to Utah. Photo credit: NASA/Kim Shiflett
› View Larger Image 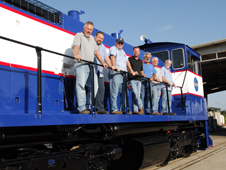 For nearly three decades, the NASA Railroad at Kennedy Space Center in Florida has kept the space shuttle's solid rocket boosters on track.

The mighty boosters fly in pairs and generate a combined 5.3 million pounds of thrust at ignition, pushing the shuttle assembly past the grip of Earth's gravity during the critical first two minutes of flight. Stacked within each of the 15-story-tall, reusable boosters are four solid rocket motor segments packed with a hard, rubbery cocktail of propellants.

Getting the 12-foot-wide, 150-ton segments to the launch site is only possible by rail. The segments are loaded by manufacturer ATK at a plant in Promontory, Utah, then shipped in customized train cars on a seven-day trip to Kennedy.

Every single booster segment used in the Space Shuttle Program has arrived at Kennedy the same way.

"The railroad is a lifeline in and out of this center," said Chris Bryant, a locomotive engineer and mechanic with URS Corp. Bryant is one of 11 team members in the URS railroad shop who operate and maintain the railroad's cars, tracks and facilities.

At the Wilson's Corners junction at the northern end of the space center, the NASA Railroad splits into two nine-mile stretches of track. Kennedy's mainline runs south, past the Vehicle Assembly Building and other Launch Complex 39 facilities before reaching the center's Industrial Area. To the east, a second line of track extends to the Cape Canaveral Air Force Station.

Each incoming shuttle-booster segment rests on a cradle in a custom-built railcar. A clamshell-like cover, hinged at the top, protects the hardware throughout the journey. Fully loaded, a single segment car weighs 513,000 pounds.

That's when the Kennedy railroad crew takes charge, starting with a thorough inspection.

"When loads come in, you have to inspect every car," explains Will Eriksen, part of the URS team and a three-decade veteran of the Kennedy railroad operation. "You want to make sure you're not going to drag anything in that's going to cause a hazard to the commodity."

Although the train has to traverse a drawbridge spanning the Indian River, the bridge is not strong enough to hold a train with so many heavy cars. The solution: Empty "spacer" cars are added between the segments to distribute the weight over the individual spans of the bridge, so the weight on the bridge is manageable.

The NASA locomotive pulls the train across the river to Wilson Yard, just west of Wilson's Corners junction, where the spacer cars are removed.

"Once we're done and have (the segment cars) all gathered up, we bring them into Suspect Siding," Bryant says, referring to an isolated staging area on the northeast side of the Shuttle Landing Facility. The segments stay there until United Space Alliance technicians are ready for them in the booster Rotation, Processing and Surge Facility, where they are rotated to vertical and prepared for stacking.

Although the Kennedy rails are built to withstand mainline track speeds of 60 mph, when the booster segments arrive at Kennedy, the weight and the danger involved require more caution.

"Our track speed is 25 miles an hour -- and normally, we don't reach that," Bryant says. "Normally, our speed is no more than 10 to 15 miles an hour. When we come up to crossings, sometimes it's even slower than that."

"When we're hauling in, we're hauling 4 to 5 million pounds of explosives," Bryant points out. "Through the crossings, too. It's not something to sneeze about, you know."

Kennedy's rail system was activated in 1963 when FEC added a 7.5-mile connection from its mainline across the Indian River to the space center. At that time, the spaceport was in the midst of a construction boom as facilities were built for the Apollo program, and the railroad provided a means of hauling heavy building materials into the center.

"The railroad was built to accommodate the freight cars of that time, which were mostly 50 and 70 ton capacity. It was a very adequate railroad for the cars of the time," says David Hoffman, who managed the NASA Railroad at Kennedy for 13 years until his retirement in 1996.

But by the time the Space Shuttle Program was beginning, the railroad was in sad shape after years of exposure to the salt air and moist, tropical climate. The wood crossties were rotting, rust had eaten away at the hardware, and the rail itself needed to be strengthened. FEC was contracted to upgrade the system.

"We put in the heavy rail (with) welded joints, which are stronger than a bolted joint, and (requires) virtually no maintenance," Hoffman recalls. "And we went to the concrete crossties. You're looking at a 50 or 60 year life of the crosstie instead of 10 or 12 or so for wood in Kennedy's subtropical climate, which means we put it in place and basically walk away and forget it. A lot of that track out there has been in place now since the late 80s, and it has not been touched except for weed spray."

NASA bought that portion of the railroad line from FEC in 1983, two years after the shuttle began flying, and today the skilled Kennedy crew maintains the system.

"It's just not running the railroad. We take care of all the maintenance: electrical, the air systems, mechanical, painting, fabrication, welding," Bryant says. "We are allowed to work on any government-owned rolling stock, locomotives and railcars."

NASA uses switcher locomotives, which are brawny machines that move a lot of weight over relatively short distances. The first locomotives used by NASA were three Alco S2 locomotives obtained surplus from the U.S. Army. Built in the early 1940s, they worked well until the loads required to support the Space Shuttle Program proved beyond their capability. So Hoffman initiated the procurement process to buy the space center three EMD SW-1500 locomotives built between 1968 and 1970.

The 1,500-horsepower locomotives used today "have a lot of backbone," according to Bryant. "When we bring in the segments and the spacer cars, we've got probably close to 4 1/2 to 5 million pounds that we pull with one motor."

In addition to more familiar hopper cars and gondola cars, Kennedy's rolling stock includes cars modified or designed here. For example, Hoffman designed the booster structures car, capable of hauling additional shuttle booster components such as frustums and aft skirts. There are only two such cars in the world -- both in the space center's main rail yard.

"We've rebuilt the Air Force locomotives. We've built railcars. We've done painting," says URS Lead Mechanic Mike Stephens. He gestures behind him to the No. 3 locomotive, recently refurbished and topped with a new blue-and-white paint job. "I mean, this locomotive here, you can see how much better it looks than the other two. We're a pretty diverse group and we stay busy."

That expertise is essential, considering the dangerous commodities the railroad system so often has carried. In addition to the shuttle boosters, the NASA Railroad has carried nitrogen tetroxide, an oxidizer used as rocket propellant; Air Force Titan rockets; Navy Trident missiles; and the shuttle-based booster segments for the Ares I-X flight test.

One of the simpler tasks is hauling spent solid rocket booster casings over to Jay Jay, to be sent back to ATK. With no additional paperwork to handle and no inspections to perform, the task takes about half the time required to bring a loaded set in.

The final set of space shuttle booster segments arrived in May 2010. As the Space Shuttle Program draws to a close, members of the NASA Railroad team all express pride in their contributions, especially their stellar track record for safety.

"No safety issues and no real problems ever, since day one," Stephens says. "It's been a great working operational feat, that's for sure."
Anna Heiney
NASA's John F. Kennedy Space Center
› Back To Top