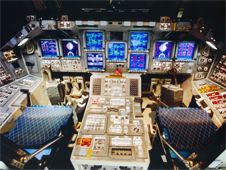 Image above: The cockpit of space shuttle Discovery is brightly lit as preparations are made for the shuttle's final power down. Photo credit: NASA/Ken Thornsley
› View Larger Image 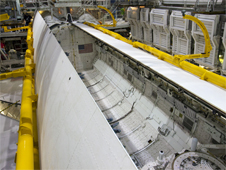 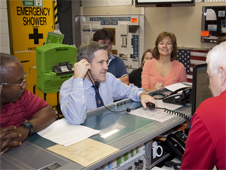 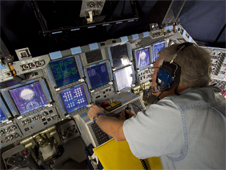 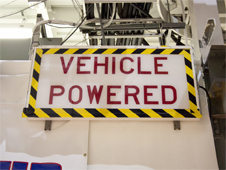 Space shuttle Discovery was powered up hundreds of times during prelaunch processing over the course of 26 years of spaceflight. But Dec. 16, 2011 was different. That morning, technicians inside NASA Kennedy Space Center's orbiter processing facility powered the ship up -- and then down -- for the final time. Less than a week later, on Dec. 22, Atlantis followed.

"After working so many years -- since 1988 -- on these vehicles, it's a little hard to say, 'I'm taking my best car and I'm going to not drive it anymore. In fact, I'm going to go ahead and fix it so it can't ever crank anymore,'" said United Space Alliance's Walter "Buddy" McKenzie. After overseeing preparations of several space shuttles during his career and witnessing both Discovery's and Atlantis' power-down, he reflected, "The realization really hits you when you're powering down a vehicle for the last time."

One by one, flight deck switches and displays were turned off by spacecraft operators inside the crew module, while in the firing room inside the nearby Launch Control Center, test conductors gave direction as system engineers monitored the process. Finally, the lights on the flight deck went out for good.

These are important milestones in the shuttle's transition and retirement activities. Discovery, Atlantis and Endeavour all are being prepared for their retirement roles as museum attractions, and the team still has plenty of work to do before the vehicles are safe and ready for public display. But that doesn't make the transition easier for those who cared for these spacecraft, sometimes for decades, and were there to see two shuttles into permanent sleep.

"My gut's tied up in knots, because I know I won't be doing it again," said Gene Dixon of United Space Alliance. A spacecraft operator for the past 27 years, he was one of three technicians working through the checklist for the last time inside Discovery's flight deck.

The world knows NASA's most-flown orbiter as space shuttle Discovery, but to the shuttle team, it's OV-103, short for Orbiter Vehicle-103. After landing at Kennedy for the final time on March 9, 2011, preparations began for its public display at Smithsonian's National Air and Space Museum Steven F. Udvar-Hazy Center in Chantilly, Va.

Shuttle processing activities typically required that the vehicle be powered. But the team reached a point in mid-December when all of those tasks were complete, and vehicle power would no longer be needed. So Discovery was powered up, the payload bay doors were closed, and the spacecraft then was powered down.

"Everyone that's used to working in the midbody or seeing those (payload bay) doors open, all of a sudden were watching them close, and knowing that that was the final time that we here at Kennedy Space Center would ever see inside that midbody," said Stephanie Stilson, the NASA flow director overseeing all the orbiters' transition and retirement activities.

"Even at the Smithsonian, there are no plans to open the payload bay doors on Discovery, so as far as we know right now, those doors will never open again."

When the power-down checklist was complete, Kennedy Space Center Director Bob Cabana pulled the plug on the "Vehicle Powered" sign near the operations desk.

"I just want to thank everybody on the loop for an outstanding job you guys have done over the years," Cabana said, referring to the communications channel used by the shuttle team during processing activities. "It's kind of a momentous day, and I just appreciate everybody's hard work, and the team's doing absolutely outstanding. It is special to see you power down the vehicle for the last time."

Atlantis, or OV-104, touched down before dawn on July 21, 2011, wrapping up the STS-135 mission and completing the last flight of 30 years of Space Shuttle Program missions. Destined for display at Kennedy Space Center Visitor Complex, it's temporarily moving to the Vehicle Assembly Building to make room in the orbiter processing facility for Endeavour.

"We basically laid out the work so we could get what we had to get done to be able to power down," Stilson explained. "We got all that work taken care of right away, so we could continue with the safing efforts over in the Vehicle Assembly Building. We can't do everything over there, but it will allow us to continue and keep our schedule if we can continue that work."

With the shuttle's robotic arm and Ku-band antenna stowed and the payload bay doors closed, Atlantis' power was shut down.

Endeavour's final power-down is yet to come as the spacecraft is readied for delivery later this year to the California Science Center in Los Angeles.

Stilson compares the shuttles' pending departures to sending your children off to college.

"You don't want to see them go, you're going to miss not having your hands on them every day, and knowing that you can really look out for them, but you're happy for this progression of their career," Stilson said. "And you just trust that there will be other people there to take care of them and look out for them."

In addition to those participating in the work to power the vehicles down, several other shuttle team members gathered to observe and honor the spacecraft they know so well.