Grow Text SizeShrink Text Size
Orbiter Processing Facilities: High-Tech Shuttle Garages
If home is where the heart is, then the heart and soul of NASA's space shuttle fleet reside in three custom-built, 29,000-square-foot buildings at Kennedy Space Center in Florida. They're formally called orbiter processing facilities, but routinely go by the names OPFs, bays, or hangars, and inside highly experienced technicians perform two-thirds of the work to prepare a shuttle for space.

The bays may be the highest-tech garages on the planet, where workers ready a spaceship for flight without scuffing it and huge cranes move tons of cargo into place. But it's also a place where staples are prohibited from the paperwork technicians work off of so the little pieces of metal don't accidentally become embedded in the shuttle's critical systems.

Fresh off Kennedy's Shuttle Landing Facility and back from a mission, shuttles are towed to their individual processing bays. In recent years, OPF-1 and OPF-2, which are connected by a 233-foot-long low bay, have been the residence of Atlantis and Endeavour, respectively. Across the street is OPF-3, the home base of Discovery. Once inside, technicians jack-and-level the shuttle to maintenance height where platforms and a main access bridge surround the spacecraft like a glove.

"Each high bay has a footprint of the orbiter, and when it rolls in, it has to fit to that footprint," said Wayne Bingham, a United Space Alliance, or USA, flow manager. "We try to keep the platforms within a maximum distance of 6 to 8 inches, but a minimum of 4 inches." 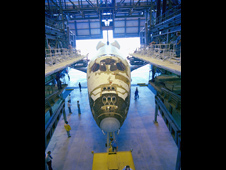 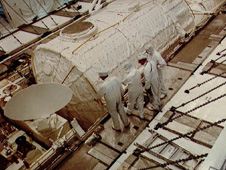 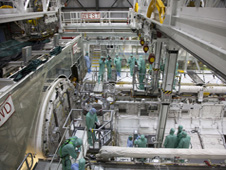 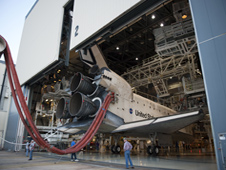 Image: Shuttle Discovery's tail fin clears the hangar door of Orbiter Processing Facility-2 at the end of its 39th and final spaceflight mission, STS-133 in March 2011. Inside the OPF, Discovery will be prepared for future public display. Photo credit: NASA/Kim Shiflett
› Larger image 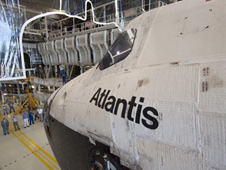 Image: Workers watch as shuttle Atlantis slowly backs out of OPF-1 during its rollover to the Vehicle Assembly Building for its final mission, STS-135. Photo credit: NASA/Jack Pfaller
› Larger image


Bingham began working at Kennedy in the late 1970s to prepare shuttle Columbia for its first flight, STS-1, and said the day-to-day operations in an OPF are like working in a garage.

During the first couple of days after a shuttle returns from a spaceflight, technicians remove hazardous chemicals like fuel, dry the engines and open the door panels to gain access. Then, they remove the previous mission's payload. Next, it's on to about three month's worth of work to check the heat shield tiles, swap out the space shuttle main engines, or SSMEs, and assess the vehicle's structural, mechanical and electrical integrity.

All of that painstakingly detailed work requires quite the team effort.

"We do virtually the same testing and checkout and work on the three orbiters, but each team has its own feel and it's really created at the leadership of the team from the flow director on the NASA side and the flow manager on the USA side," said Shuttle Launch Director Mike Leinbach. "They set the tone for their team much like a commander sets a tone for a mission."

"We all think we're the best, which is good," Bingham said. "It keeps everyone in a competitive spirit and keeps everybody on their toes."

Mark Barnes, a USA orbiter operations manager, also worked at Kennedy when Columbia arrived from its assembly plant in Palmdale, Calif., and remembers one of his first jobs in shuttle processing.

"They had not developed what's called the densification process for the tiles yet," said Barnes. "In bay 2 we had what was called the back shop setup. So, what we were doing in bay 1 was, we were taking the thermal tiles off of Columbia that were installed at the plant and we were bringing them into bay 2 and running them through the back shop densification process and then reapplying them."

"There were a lot of people on that project because it was an overwhelming amount of work," Barnes continued. "You know, nobody planned on pulling those tiles off after the orbiter arrived."

At their disposal today are 30-ton bridge cranes, two rolling bridges with trucks that have telescoping arms attached to buckets which rotate and hold them while they work. Communications rooms, offices and supervisory control rooms complete the buildings.

Not only do OPF workers enjoy the benefit of interfacing with one of the world's most recognizable icons day in and day out, they also enjoy a comfortable working environment.

"We keep the OPFs at around 70 degrees and about 45 percent humidity," Barnes said. "So, we keep it somewhat dry . . . quite dry for Florida."

Barnes said the reasoning behind the moderate temperature and humidity is to protect the hardware, especially during the summer months when the sunshine state becomes a virtual sauna.

"We also have environmental control systems, purge air going through orange ducts that purge all the compartments, the aft compartment, the payload bay compartment, the crew module and the forward compartment so that we keep good dry air blowing in there from a corrosion standpoint," Barnes said.

The comfortable environment is a clean one, too. Jim Bolton, shuttle Atlantis' NASA vehicle manager, said everyone who works inside lives by very strict house rules that start with foreign object debris, or FOD, training.

"Something as innocuous as a staple, which we don't allow on the paper products out here, but a staple in the crew module just finds a place and it rests. Well, during launch vibrations, during the zero gravity, that staple could move around and it could create an electrical short," Bolton explained. "There are other things that could go in there, even a cleanup rag could get lodged into any type of duct work or hydraulics."

To be sure FOD doesn't make its way inside, orbiter access clerks are stationed in the bays logging everything that goes in and everything that comes out. Daily and weekly walkdowns by technicians and USA and NASA quality inspectors also take place.

On occasion, OPF workers get to put their hands on the spacecraft or payloads flying aboard a shuttle, specifically those processed in a horizontal position. One such payload was the 8,000-pound European-built Spacelab 1 module, which was installed in Columbia's bay in September 1983 while the shuttle was in OPF-2.

Dan Johnson, Atlantis' senior vehicle engineer with USA, said sometimes the team has to troubleshoot issues or replace crucial systems. For example, prior to the final flight of Atlantis, the shuttle experienced an issue with its external fuel tank actuator, which is a mechanism that retracts back into the shuttle after the tank separates in orbit.

"This needed to be coordinated with a couple different engineering systems teams, as well as with our NASA customer, the chief engineering office and with flow management," said Johnson.

Those teams got together, resolved the issue and continued routine processing, but not without informing the astronauts who will be strapped into the spacecraft traveling about 17,500 mph in space in a few months.

"We try to keep them tied in, or just communicate the problems that we've had and it's just a way to maintain rapport," said Johnson. "Especially if it was an in-flight anomaly from a previous mission . . . they know we addressed it and she's ready to fly."

"They are all so detail-oriented and so meticulous and precise and they won't let something go that's substandard," said Rex Walheim, a mission specialist aboard Atlantis' STS-135 mission.

That implicit trust could stem from the personal relationship each OPF worker develops with their shuttle while working in a bay.

"You actually walk around sometimes and talk to it," Bingham said. "You know, 'You've got to be good today, you can't break, you've got to do this test, we've got to do it on time, so you've got to perform. People look at you who are outside the business and think you're crazy. But in reality, it's just the niche that you develop with the spacecraft."