Grow Text SizeShrink Text Size
Roster of Runways Ready to Bring a Shuttle Home
Long before a space shuttle crew spots its intended landing target, mission controllers closely monitor the spacecraft, the astronauts and the weather at a roster of runways around the globe. Meanwhile, support crews are ready and eager to usher the astronauts in on the last leg of their journey.

The preferred finish line is the shuttle's home base at NASA's Kennedy Space Center in Florida -- a 15,000-foot-long runway that is about as wide as the length of a football field.

"The 'go' for deorbit burn is usually done about the time we're in our last briefing," said Richard Merritt, a landing support manager with United Space Alliance. "You know they're not going to California, they're definitely coming here. So everybody kind of hoots and hollers and then we head out to the vehicles."

Construction of Kennedy's Shuttle Landing Facility wrapped up in 1976, but the site didn't host any shuttles until 1984. From the first shuttle mission in 1981, the primary landing site was Edwards Air Force Base, adjacent to NASA's Dryden Flight Research Center in California. 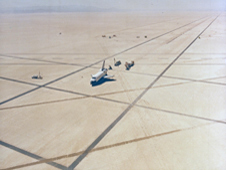 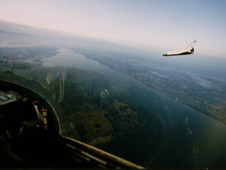 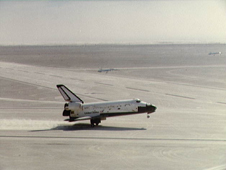 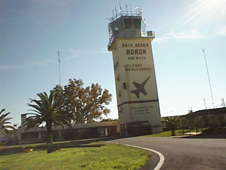 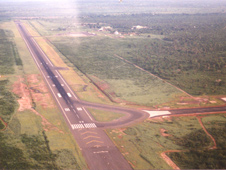 Image: The Republic of the Gambia is a former transoceanic abort landing (TAL) site. Other countries that once hosted TAL sites include Senegal and Morocco. Photo credit: NASA
›   Larger Image


Merritt said Florida's marshy terrain was the main reason it took nearly a decade to move from one coast to another.

"If you didn't make the runway here, you'd be talking to the alligators," Merritt said. "Out in the desert, we landed on the dry lakebed. It's just lots of room to land if you had some kind of problem and you didn't quite make the runway."

Columbia was the first shuttle to complete a spaceflight when it touched down on the desert's dry, expansive target April 14, 1981, ending the STS-1 mission.

NASA Convoy Commander and Ground Operations Manager Dean Schaaf said the main difference in landing at Kennedy and Edwards is all in the processing. At Kennedy, ground crews get a shuttle ready to be moved off the runway to its hangar, then three or four hours later, it's towed to an orbiter processing facility.

"Out there, we tow it up to the mate-demate device, the MDD, and we have side access platforms that lower down and around the orbiter and we do all the processing," Schaaf said. "It takes us seven days from landing to being ready to ferry after we attach the tailcone and back out and everything."

As expected, Schaaf said, processing outdoors has its share of hurdles.

"It's all done out in the elements and we have had rain, and hail and lightning . . . all of those elements to work around out there at Dryden."

Kennedy and Edwards aren't the only options for the shuttle. There's also White Sands Space Harbor in New Mexico, which is where astronauts practice landing their Shuttle Training Aircraft because of its close proximity to NASA's Johnson Space Center in Houston. It's only been called upon one time to host a real shuttle landing, though: Columbia on the STS-3 mission on March 30, 1982.

It wasn't easy processing the shuttle in the gypsum-filled desert, though. And Merritt said there's a reason it's called "white sands."

"Parts of it look like a moon with dunes. It's just pure, pure white, part of the desert is. So it's a real fine powder . . . not quite like flour, but it's real fine and gets into everything," Merritt said.

After that first-and-only landing, NASA chose to relocate the processing turnaround area to minimize the wind. However, Schaaf said it would still take about 46 days to prepare a shuttle for its return to Kennedy.

"We’ve built a tow way from the lakebed over to the west side of the range and we're out of the blowing gypsum. We have a pad, a 100 by 100-foot turnaround pad there, that the shuttle would be parked on. And all the processing would be done off of that concrete slab," Schaaf said.

The end of a mission is not the only time NASA focuses on a landing site. If a shuttle were to encounter a problem during launch, it could go to a transoceanic abort landing site, also called a TAL site. There are two in Spain -- Moron and Zargoza --and one in southern France -- Istres. Other countries that once hosted TAL sites include the Republic of the Gambia, Senegal and Morocco.

"The Shuttle Landing Facility reminds me of the site we used to have in Ben Guerir, Morocco. It was a landing strip out in the middle of the desert with a tower and very little else. And we built a building there and we used that for missions all the way up until the early 2000s when we closed that site and opened up Istres, France," Schaaf said.

Glen Lockwood, also a NASA ground operations manager, flies out to a TAL site before every launch and said even if it's a perfect day in Florida, bad weather elsewhere could be a showstopper.

In the Space Shuttle Program's nearly 30-year-history, a TAL site has never been needed, but that doesn't change the intensity of preparations for the team.

"I remember back in '99, it was Eileen Collins' mission. I think she was commander at that time, and we had some technical problem with the vehicle upon launch. And so we were concerned that we might be needed, but we weren't, thankfully," Lockwood said. "We've never been used. And of course everybody when we go over there, we are basically programmed to be ready, but we are all hoping that we will not be needed."

Along with TAL sites, there are a myriad of commercial airports and military-operated air stations and bases that could be used to land the shuttle in an emergency situation. Personnel at those sites receive training from NASA on what to do if a shuttle heads their way.

As the Space Shuttle Program comes to an end, landing support team members are looking forward to getting their hands on each space shuttle for the last time.

"It's just awesome to see this big heavy, bulky thing coming out of the sky. And almost coming straight down like a brick," Merritt said. "I always say it's like a brick, and it just glides down and lands.

"It's excitement and anxiousness, and some sadness in there because you know it's wrapping up. And each one, as we get closer to the end means a lot to everybody."