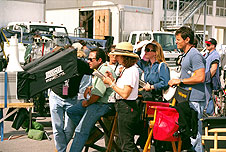 Filming for "Armageddon" at NASA's Kennedy Space Center in 1997. Director Michael Bay used the space shuttle and its facilities as central roles in the summer blockbuster from 1998. Photo credit: NASA
› Larger image 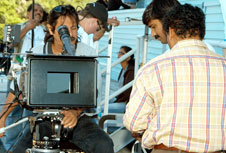 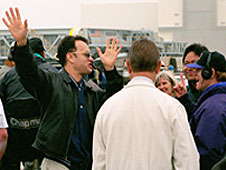 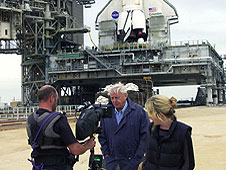 Movie audiences have watched space shuttles launch off the back of a 747, land on an asteroid and take off on a hurried flight to keep an aged satellite from plummeting to Earth. The scenes have not been real, sometimes not even realistic, but they helped solidify the shuttle's place as a vehicle of adventure.

"People, when they think of space exploration, they often think of shuttle," said NASA's Bert Ulrich, the person who reviews scripts to help decide whether the space agency will lend its credibility and assistance to a project. "I think that space exploration is a draw, and tantalizing, and people want to grasp it."

Ulrich gets between 15 and 20 feature film scripts a year from companies asking for NASA's cooperation or assistance. Most are looking for permission to use NASA logos and similar items to add realism, while other projects call for field centers to host a full movie production team complete with film stars.

Just as it inspires the public, space exploration draws out creativity in movie makers, Ulrich said.

"I just think space is a gigantic inspiration, it's a huge thing to conquer," said Michael Bay, director of 1998's "Armageddon" and 2011's "Transformers: Dark of the Moon." He has brought production crews to NASA's Kennedy Space Center and other NASA field centers to use the shuttle and facilities in his movies. "It's an other-worldly thing. It's something we still need to discover, we need to go farther."

"It takes just one small moment to capture a child's imagination and send him off on a lifetime's journey," said Ian Bryce, a 'Transformers' producer who worked with such franchises as "Star Wars" and the Indiana Jones films.

The space shuttle became a movie star before it even made its first flight in 1981. One of its first roles came in 1979 when James Bond villain Hugo Drax steals a shuttle off the back of a 747 shuttle carrier aircraft at the opening of "Moonraker." Bond, riding inside one of several shuttles, chases the bad guy to a space station for the climactic battle.

In 1986, the space shuttle became the setting for a summer adventure gone wrong in "Space Camp," a film which saw a group of teens and a robot accidentally launched into orbit.

That notion of the space shuttle allowing more people than ever to go into orbit, and to go more often, proved true. It also became a guiding principle for producers, according to Lorenzo di Bonaventura, a producer on the three "Transformers" films and other science fiction movies.

The reach of the space program as a film subject is not limited to the United States. An Indian production crew filmed scenes of "Swades" at Kennedy in 2004.

The shuttles have provided more than a storyline. In many films the spacecraft themselves have had a role, as directors and producers rolled camera to witness a shuttle rollout to the launch pad and, of course, a real launch. Actors have walked down the orbiter access arm to set the tone and have performed in the firing rooms, orbiter processing facilities and other Kennedy locales.

Clint Eastwood worked in the Space Shuttle Main Engine Processing Facility and the lobby of the Launch Control Center for a couple scenes in the 2000 film "Space Cowboys."

"I wanted to make the film as believable as possible," Clint Eastwood said on the "Space Cowboys" website. "In order to do that we needed NASA's help to get as close as we could to the circumstances surrounding a launch. Bringing a film crew in to simulate the whole thing was probably an even bigger headache for NASA, but the agency really came through for us."

Being so close to the real thing typically gives filmmakers a different perspective.

"It's amazing, when I shot 'Armageddon,' one of the truest things about being an American was being up on that gantry, on that catwalk walking to the shuttle," Bay said. "We had a shuttle there when we were doing Armageddon. To describe the amount of manpower that went into building this thing, you know, it's just a massive undertaking and it's just awe-inspiring."

Using the real-life settings for the shuttle also gives directors a true place to begin stories that take audiences well beyond fact.

"The Kennedy Space Center has always been this kind of mythical thing for me," di Bonaventura said. "You imagine it out there and then you come here and you realize how many people are working here and what this kind of endeavor entails, and it's a gigantic amount of things that are going on and the amount of detail was something that was surprising to me."

Ulrich expects to keep receiving scripts that will focus on the shuttle years after the orbiters have been retired.

"I think there are some stories that haven’t been told yet," he said. "As with 'Apollo 13,' when you look back at certain eras, after a certain time you have the perspective more, people can see the compelling story behind that as opposed to when they are going through it."

"At first, it was a really incredibly unusual thing and then it became routine for awhile and then you come here and you look at this small, this really small aircraft that they're getting into and you realize how man-made it is," di Bonaventura said. "And it really brings home the kind of danger and kind of adventure it represents."