Grow Text SizeShrink Text Size
How the Space Shuttle Got "Smarter"
Computers have been an integral part of NASA's space shuttles since its conception. But the time came when upgrades needed to be made to make the orbiters safer and easier to fly. And Roy Uyematsu, staff engineer with United Space Alliance's Data Processing System group, was there when it happened.

For 22 years Uyematsu has worked on the shuttle flight crew computers -- a dream job for him since he was a youngster. "I was old enough, around 8 or 9, to remember Apollo 8 and Apollo 13 and I thought that was the neatest thing I've ever seen," Uyematsu said. "I remember Apollo 8 going around the moon and getting up at night and going outside with binoculars trying to look to see if I could see anything . . . and with the moon landings, it was the first time I got to stay up all night to watch TV." 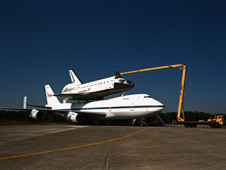 Image: On Nov. 11, 1997, Atlantis atop the Shuttle Carrier Aircraft at Kennedy, was prepared for its ferry flight to Palmdale, Calif. for its Orbiter Maintenance Down Period and installation of the new Multifunction Electronic Display Subsystem (MEDS) or "glass cockpit." Photo credit: NASA/KSC
›  Larger image 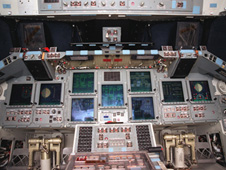 Image: A new full-color, flat panel MEDS, is shown in the cockpit of Atlantis after the spacecraft returned from its modification period in Palmdale, Calif. Photo credit: NASA/KSC
›  Larger image 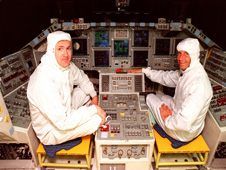 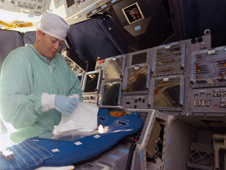 Image: In Oct. 2005, a United Space Alliance technician works on the flight deck of Endeavour in Orbiter Processing Facility-2 as the spacecraft undergoes major modifications, which included installation of the the state-of-the-art "glass cockpit" (MEDS). Photo credit: NASA/KSC
›  Larger image 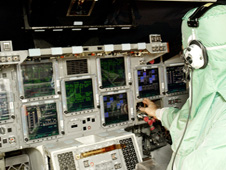 Image: During Discovery's Orbiter Major Modifications period in Aug. of 2003, a technician tests a monitor on the console of the newly installed "glass cockpit" or MEDS. Photo credit: NASA/KSC
›  Larger image 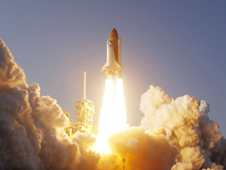 Image: Space shuttle Discovery heads to space after lifting off from Launch Pad 39A at NASA's Kennedy Space Center in Florida to begin its final flight to the International Space Station on the STS-133 mission. Photo credit: NASA
›  Larger image

After college, Uyematsu worked with a submarine missile program out of Cape Canaveral. "The program was slowing down by '86 or '87, so in '88 I came here (to Kennedy) and actually got the job I always wanted and have been here ever since."

Uyematsu worked on flight system software and hardware, worked with the launch teams in Kennedy's firing rooms and on the orbiter gaining a remarkable amount of experience. "You never quit learning, especially out here. There's always something new every day," he said. So Uyematsu was well-prepared when the time came for the orbiters to be upgraded.

Atlantis was the first orbiter to undergo numerous modifications during a 10-month major overhaul in 1998. One of the most remarkable changes was the installation of the Multi-function Electronic Display System (MEDS).

"Previous displays were old green screens -- with no graphics and very few capabilities," Uyematsu said. "The other instruments were actually mechanical airplane cockpit meters and we had a lot of problems with the meters. They were designed in the 60s, built in the 70s and by the mid-80s the companies that built those meters had gone out of business, so when a meter failed it would have be taken out, replaced with another and then repaired."

By the 1970s though, CRT screens in some commercial cockpits were replacing a few of the dials, gauges and instruments. In the meantime, NASA's Langley Research Center in Virginia was working with industry partners to develop a concept for a fully electronic glass cockpit flight display system.

The NASA-led glass cockpit design was tested in ground simulators and demonstration flights in the NASA 737 flying laboratory. That research eventually led to the Federal Aviation Administration certification of electronic flight displays. Based on that work and a positive response from industry customers, The Boeing Co. developed the first glass cockpit for its 767 aircraft in 1982.

Eventually electronic flight displays became mainstream equipment on all commercial aircraft. Airlines and passengers benefitted from the increased safety and efficiency. Added to that was the improvement of the pilot's understanding of the aircraft's position relative to its environment.

Naturally, what was important on a commercial airliner also could be enormously beneficial to the astronauts flying the space shuttle.

Atlantis was chosen as the first orbiter to receive the glass cockpit. The new display was one of many upgrades that took place at Boeing's Palmdale, Calif., shuttle factory during the orbiter's 1998 modification period.

Uyematsu and his team flew to in Palmdale to install the new MEDS system. "It was exciting to go to Palmdale where the shuttles were built," Uyematsu said, "but the actual fun was putting the MEDS hardware into Atlantis."

"The parts were made at Kennedy, which made the installation go smoothly, especially because it was designed to be a drop in -- everything fit in the old slots," recalled Uyematsu.

The system then went through a "smoke test," which essentially is a power-up phase, to make sure there were no shorts in the wires, that the boxes "talked" to each other and that all the information was transmitted properly. It took a little more than three weeks to complete the installation and testing procedures.

The new cockpit display system improved the crew-orbiter interaction with easy-to-read graphics of key flight indicators, such as attitude, altitude and speed -- many of the indicators the astronauts need to know during liftoff and to navigate and land the vehicle.

Atlantis lifted off with its new cockpit and modifications on the STS-101 mission in May 2000. The crew liked the new system and found it to be very reliable. They also made some suggestions for changes as to what and where information was displayed. "They were pretty excited about the fact that there was a new system . . . especially when they found out it can be configured to their specifications," Uyematsu said.

Each orbiter is configured differently for every mission, according to what the astronauts want to see displayed in each window. Because the crew trains on the mock-ups at NASA's Johnson Space Center in Houston, they know where and how they'd like to see the information displayed on the real orbiter.

"We make sure to make those changes so they can be as comfortable as possible when they come to Kennedy for launch rehearsal training and the actual liftoff," Uyematsu said.

Modifications and upgrades including the glass cockpit began on space shuttle Columbia in 2000. In September of 2002, Discovery was ready for its second Orbiter Major Modification (OMM) period for maintenance and upgrades. With more than 100 modifications and the addition of MEDS, Discovery was well prepared it for its Return to Flight mission in July 2005. Endeavour's OMM began in 2003 and made its first flight with the glass cockpit in August 2007 on the STS-118 mission.

Asked what it's like to sit in the same seats the astronauts take on launch day Uyematsu said, "Normally you have a job to do and you're not really thinking about it. But after you've been on the shuttle and you've pushed the buttons, you realize that's something that not many people get a chance to do."

Self-testing during the flow, when the vehicle is being prepared for its next mission, takes about three hours. A self-test consists of one engineer in the orbiter and one in the firing room. "We're basically pushing buttons, getting responses and going through the checkouts listed in a checkout book that's about 2-inches thick," Uyematsu said.

Just before the shuttle is rolled out to the pad Uyematsu and his team test the MEDS. "Testing the system for flight is all done from the firing room and consists of turning on all the boxes to bring up the correct display with the right menu from the right data source for every box and make sure it's correct," Uyematsu said.

Uyematsu worked on configuring the cockpit system for shuttle Discovery's STS-133 mission and tested the system once more before it rolled out to the pad again. He was visibly emotional when talking about what it meant to him to work on Discovery's final flight. "People put their lives into this (space program) out here, it's like home. It's hard, it's sad, because you know that it has to come to an end and you know that in your mind, but it's hard for your heart to accept it. That final time powering everything up, pushing all the buttons to get the right displays up and getting things configured before the countdown," Uyematsu said as his voice trailed off.

"The space program has meant a lot to me. It's kind of a sense of belonging, a friendship, it's hard to explain. This is my home, I live in a house, but this is my home."

In 2001, Uyematsu was awarded the prestigious Silver Snoopy Award, which honors those who contribute most to the safety and success of human spaceflight and service to the shuttle astronauts.

It's evident how much Uyematsu loves his work and the people he works with. "There's a lot of teamwork out here -- no one works in a vacuum. It can be a great life . . . and I've had it for 22 years."