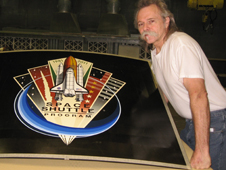 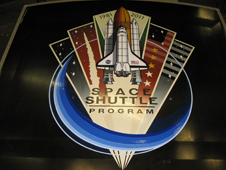 When space shuttle Atlantis launches on the last shuttle mission in July, the external tank, designated ET-138, will be adorned with a colorful design painted on its side.

It is only the second time in 135 missions that an external tank will feature artwork, following ET-122, which flew with shuttle Endeavour in May.

ET-138’s ‘nose art’ is the winning design from the NASA Space Shuttle Program Commemorative Patch contest. The commemorative emblem is painted on a three-foot high by five-foot wide intertank access door near the top of the tank. It is a logo of the space shuttle surrounded by panels depicting the U.S. flag, 14 stars to commemorate the astronauts lost aboard shuttles Challenger and Columbia, and five panels symbolizing the entire shuttle fleet, including Discovery, Endeavour and Atlantis. It is surrounded by a blue circle and contains the inscription, “Space Shuttle Program, 1981-2011,” the years the shuttles flew.

The logo was designed by Blake Dumesnil, an engineer at Johnson Space Center in Houston, and was painted on the door by Lockheed Martin graphic artist Jon Irving, who works at NASA’s Michoud Assembly Facility in New Orleans, where the tanks are built.

Irving hand painted the design on the door at Michoud and it was shipped to Kennedy Space Center, Fla., where it will be installed on the tank before the launch of shuttle Atlantis on the STS-135 mission, scheduled for July 8.