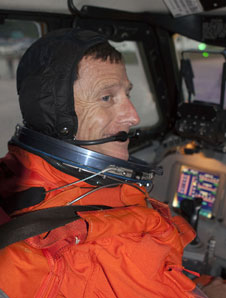 STS-135 Commander Chris Ferguson at the controls of the Shuttle Training Aircraft. He sits in a cockpit identical to the commander's position in the space shuttle. Photo credit: NASA/Troy Cryder
› Larger image 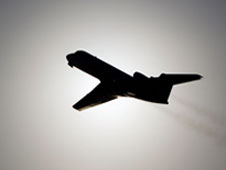 A Shuttle Training Aircraft plunges 28,000 feet in a little more than a minute when astronauts use it to practice a space shuttle approach. It’s as close as anyone can get to experiencing a shuttle landing without becoming an astronaut. And what a ride it is.

It takes nine minutes for the STA, a modified Gulfstream II business jet, to reach the altitude for the first run, a little lower than airlines typically cruise. STS-135 Commander Chris Ferguson is at the shuttle-like controls in the left-hand seat, ready to begin his simulated landing as soon as shuttle veteran Ken Cockrell, flying as the instructor pilot in the right seat, gives him the plane.

This mission is expected to be the last flight of its kind during the shuttle era to host media representatives. From the beginning of the program, journalists of all stripes have ridden with shuttle crews to see what a landing entails. We board at dusk and as we climb up to altitude, the horizon is still lit to the west, with a glow of yellow and orange on top of a blue haze. There are a few clouds higher than us, but nothing below except air and the lighted outlines of NASA's Kennedy Space Center, the Vehicle Assembly Building rising majestically. The south end of the shuttle runway is lit with xenon spotlights. That's our target on this first of 10 dives this evening.

Cockrell flips a few switches and the STA's engines go into reverse, the main gear lowers, and flaps on the wings open. A computer in the aircraft is setting the rules now, making the sleek jet fly like a 110-ton shuttle.

"It's a fairly clean airplane and it likes to glide and it's got good thrust," Cockrell told us before the flight. "So we have to ruin all that to make it fly like a shuttle."

All systems "go," the plane feels like it has leveled off. That doesn't last.

"You've got it," Cockrell tells Ferguson. "I got it," comes the response before the nose points down.

Gravity reduces, grows, settles and then pulls down again in a matter of seconds. Your head feels light for a moment, then blood rushes up to it. You feel your blood sink down to your feet with the next change. Looking out the windows, your eyes show you scenes they've never seen before, such as a horizon tilted more than seems reasonable. The aircraft is diving at 18 to 21 degrees now, seven times steeper than an airliner's approach.

This all started out as a relatively normal flight aboard a business jet. We were even told about oxygen masks that will drop down to us in an emergency, though we'll be dropping so fast that the need for oxygen won't last more than 10 seconds. Oh, and don't touch the red handle on the door near the cockpit, that could open the door just enough.

"The slipstream is going to blow it open or knock it off or do something and you're going to go with it," Cockrell said. "So don't do that."

Still diving, the only things out the windshield are buildings and the ground around them -- no sky is visible. You fall forward in your seat and your stuff slides down the armrest until you catch it. The plane is falling toward Earth at more than 330 mph. The runway that was far below and off to the side is now straight ahead and getting closer every second.

In terms of speed and steep incline, skiing down Mt. Everest can't be much different than this, minus the armrest.

Then the ride smoothes out and you feel a push backward as the runway rushes by beneath the aircraft. The astronaut is heading back up into the sky to make nine more dives.

Ferguson, known by his call sign Fergie, is clad in his orange partial pressure suit, known as the launch-and-entry suit. Rehearsing the same landing he will make to end his mission, he wears the same gear he will have on during the landing, complete with a helmet and gloves.

A veteran of two previous shuttle flights, Ferguson has made 1,400 of these dives and he loves them. "The bumpier the better," he says, adding that he can do these flights all day on a full stomach, no problem.

A flight engineer sits between the pilots, watching the systems and staying on the lookout for a potential danger.

"It's a neat ride," says Derek Rutovic, the flight engineer on this trip.

The flight ends after an hour and a half. Ferguson recorded 10 more dives and he is happy as he climbs down the stairs onto the tarmac, along with Pilot Doug Hurley who was flying the same practice session in another STA.

"This was perfect, I'll tell you, you guys went for a ride on a great night because, man, there are some nights that are really hard out there, really bumpy, folks not feeling good. It was nice and smooth tonight," Ferguson says. "This was about as good as it gets."