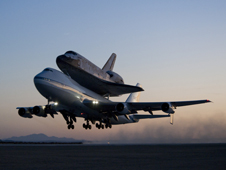 Image above: Space shuttle Discovery and its modified 747 carrier aircraft take off from Edwards Air Force Base, Calif., beginning the ferry flight back to Kennedy Space Center in Florida after the STS-128 mission. Photo credit: NASA/Tony Landis
› View Larger Image 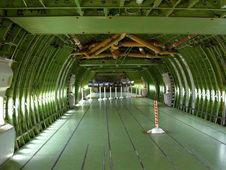 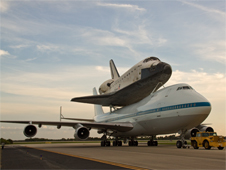 Image above: Space shuttle Atlantis, atop a Shuttle Carrier Aircraft, is towed from the runway at Kennedy. Atlantis concluded the STS-125 mission with a landing at Edwards Air Force Base, Calif. Photo credit: NASA/Jack Pfaller
› View Larger Image 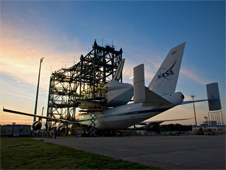 Image above: The sun rises behind the mate/demate device at the Shuttle Landing Facility at Kennedy. Shuttle Atlantis will be lifted from the Shuttle Carrier Aircraft and lowered to the ground. Atlantis concluded the STS-125 mission with a landing at Edwards Air Force Base, Calif. Photo credit: NASA/Dimitri Gerondidakis
› View Larger Image

Imagine flying from California to Florida with nowhere to sit, no air conditioning, no place to store your bags -- not even a bathroom.

NASA keeps two 747s, known as the Shuttle Carrier Aircraft (SCA), set up this way on purpose. The downstairs passenger area of these jetliners are kept as hollow inside as possible in order to carry a special cargo: a space shuttle orbiter.

It's a big assignment, and these aircraft have to work twice as hard as a normal 747 to get the job done.

"It's brute force that keeps us flying," explains Larry LaRose, a flight engineer on the SCA. "When we're carrying an orbiter, we have to use twice the power and a lot more fuel to maintain flight."

The passenger area has been stripped of many creature comforts, such as galleys, carpeting and even part of the inside temperature ductwork, all for the sake of reducing weight. But the planes still weigh more than 250,000 pounds, and the drag created by the shape and weight of the orbiter -- 176,000 pounds or more -- negates the small amount of lift it adds.

During a normal flight, the SCA might use 20,000 pounds of fuel an hour; with an orbiter on its back, that number doubles.

The piggyback arrangement might look cumbersome, but how does it fly compared to a normal 747?

"It handles remarkably the same," says SCA pilot Gordon Fullerton. As chief pilot at NASA's Dryden Flight Research Center, his daily job involves flying jets for high-performance aircraft research. But Fullerton's experience with the orbiter and SCA dates back nearly three decades. In addition to being a Space Shuttle commander and pilot, he was one of four NASA astronauts to land the Enterprise during the Space Shuttle Approach and Landing Test program in 1977.

"It's obvious [the orbiter] is up there, because there's a constant rumble that you can feel because of the wake of the orbiter hitting the vertical stabilizer of the 747," Fullerton says of ferry flights. But other than long takeoff rolls and the need for some extra care in steep turns, "it's pretty much the same."

A small team of six specially-trained pilots and four flight engineers has the critical task of making sure this precious cargo has a safe journey.

Those who serve on SCA crews are former military aviators who are qualified to fly several types of aircraft, such as the Shuttle Training Aircraft, Super Guppy, zero-gravity aircraft and T-38 jets. Most are based at NASA's Johnson Space Center in Houston, although LaRose is stationed in El Paso, Texas, and two are based at Dryden. Since ferry flights are seldom required, crew members train twice a year using simulators belonging to United Airlines.

Perhaps the biggest challenge the crew faces during a ferry flight is the weather. The orbiter cannot be exposed to moisture, turbulence or temperatures below -9 Centigrade and these restrictions determine the flight path and altitude. To meet those conditions in the winter months, they sometimes fly as low as 10,000 feet.

A "pathfinder" aircraft, usually a U.S. Air Force cargo plane, flies 100 miles ahead of the SCA carrying weather officers and space shuttle personnel from Kennedy. Also onboard is an experienced SCA pilot, whose expertise helps the ferry flight crew keep to the safest route.

The SCA makes refueling stops during a cross-country ferry flight. Along the way, residents often stop to catch a glimpse of the odd-looking duo as it passes overhead.

"You don't sneak into town with an orbiter," LaRose says, grinning. "It brings out a big crowd everywhere we go. It's a life experience for a lot of folks who have never seen something like this before."