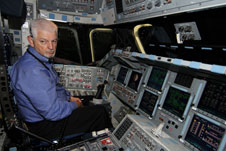 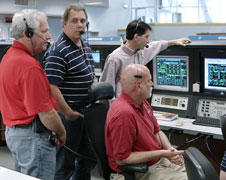 Image above: Mike Ciannilli, leaning on console, looks over readouts from Endeavour as the spacecraft's electrical power was shut down for the last time. Photo credit: NASA/Tim Jacobs
› View Larger Image 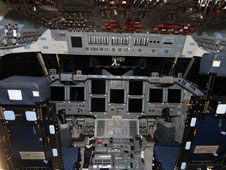 Technicians working inside space shuttle Endeavour's flight deck and controllers stationed in the Launch Control Center turned the lights out on the last powered shuttle May 11 as they switched off Endeavour's displays and systems for the final time.

"It is with a great sense of sadness that we say goodnight to Endeavour, and to the Space Shuttle Program as a whole today," said Mike Ciannilli, a NASA test director who stood at the integration console in Firing Room 3 during the procedure. "It is with a great sense of pride that we recognize the contributions of this amazing Team over the last 30 years. And it is with a heartfelt 'thank you' to the American people for the honor of launching this vehicle 135 times, to not only explore outer space, but to make life better on Earth. Good night Endeavour."

The work was a milestone for the shuttle's retirement as crews at NASA's Kennedy Space Center in Florida continue to make the spacecraft suitable for a museum career.

Endeavour's power down, which is the process controllers follow to stop the electricity flow into the shuttle, came almost 20 years to the day of the spacecraft's first launch on May 7, 1992. NASA's youngest shuttle, Endeavour flew 25 times. Its crews posted notable accomplishments, including capturing and redeploying a stranded communications satellite during that first flight, flying the first construction mission of the International Space Station and conducting the landmark mission to repair NASA's Hubble Space Telescope.

"I'd like to dedicate this power down to those who are not so fortunate to be here today, to those who gave their blood, sweat and heart to the program," said Walter "Buddy" Mckenzie of United Space Alliance, or USA.

With that, some of the same people who ran endless checklists to make sure Endeavour was ready for space ran through a checklist in reverse to take key systems offline in careful order. When they finished, Endeavour's cockpit was lit only by work lights plugged in outside the shuttle.

Discovery and Atlantis went through the same steps earlier as they, like Endeavour, were readied for public display. Discovery is already in place at the Smithsonian's Udvar-Hazy Center near Washington, D.C.

Endeavour will be flown across the country to Los Angeles where it will be displayed at the California Science Center.

Several steps remain before Endeavour will be ready to leave Kennedy at the end of the summer. The payload bay doors must be closed permanently, three replica space shuttle main engines will be installed and the hatch to the crew compartment will be closed.

When that work is completed, an aerodynamic tail cone will be bolted over the engines and Endeavour will be mounted atop NASA's shuttle carrier aircraft, a 747 jet modified to carry a shuttle on its back. The flight to the west coast is expected in September and will take several days.