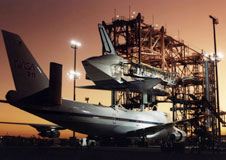 Evening light begins to fade at NASA's Dryden Flight Research Center as technicians begin the task of mounting Space Shuttle Atlantis atop one of NASA's 747 Shuttle Carrier Aircraft for the ferry flight back to the Kennedy Space Center, Fla., following its STS-44 flight in late 1991. (NASA / Jim Ross) › View Larger Image Edwards Air Force Base in Southern California's high desert, where NASA's Dryden Flight Research Center is located, was selected as the initial primary landing site for the space shuttles because of the safety margin presented by Rogers Dry Lake and its long runways, one of which stretches 7.5 miles. It was also the location of the approach and landing tests of the prototype shuttle Enterprise in 1977 that proved the bulky, high-drag shuttle could be safely maneuvered to a precise landing on a runway after returning from space.

The Western Aeronautical Test Range (WATR) at NASA Dryden supported all segments of the space shuttle program, including launch, on-orbit, and landing phases of each mission. 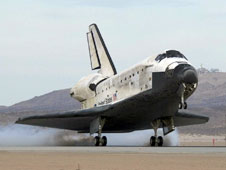 During the more than 30-year orbital program, 54 shuttle landings occurred at Edwards, beginning with STS-1 on April 14, 1981, and ending with STS-128 on September 11, 2009. Another 78 missions landed at Kennedy's Shuttle Landing Facility, while one – STS-3 in 1982 – landed at White Sands Space Harbor, part of the Army's White Sands Missile Range in New Mexico.