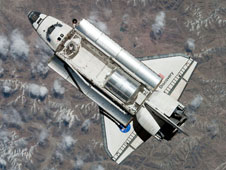 Space shuttle Discovery is featured in this image photographed by an Expedition 23 crew member as the shuttle approaches the International Space Station during STS-131 rendezvous and docking operations. Image Credit: NASA.

It has flown to space more than any other craft, and it has carried more crew members to orbit. It was the first spacecraft to retrieve a satellite and bring it back to Earth. It has visited two space stations. It launched a telescope that has seen deeper in space and in time than ever before. And twice it has demonstrated the United States' will to persevere following devastating tragedy, returning America to orbit following the two worst accidents in space history.

Although all five vehicles that have comprised NASA's space shuttle fleet are unmatched in achievements, space shuttle Discovery is unique among the extraordinary.

In 38 trips to space, Discovery has spent 352 days in orbit, almost a full year. Discovery has circled Earth 5,628 times, all the while speeding along at 17,400 miles per hour. It has traveled almost 143 million miles. That equals 288 round trips to the moon or about one and a half trips to the sun.

Discovery has carried more crew members -- 246 -- than any space vehicle. Those have included the first female to ever pilot a spacecraft, the oldest person to fly in space, the first African-American to perform a spacewalk, the first cosmonaut to fly on an American spacecraft and the first sitting member of Congress to fly in space. 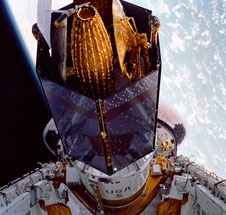 Discovery was used for NASA's Return to Flight Mission following the Challenger accident, during which the STS-26 crew delivered the TDRS-C satellite to Earth orbit. Image Credit: NASA.

It took four years to build Discovery, the third shuttle orbiter built. Named for past sailing ships of exploration, it rolled out of its Palmdale, Calif. assembly plant in October 1983 and was delivered via piggyback airplane flight to NASA' s Kennedy Space Center the next month. Discovery's first launch was Aug. 30, 1984 on mission STS-41D. That flight launched three communications satellites and tested an experimental solar array wing. The mission was commanded by astronaut Henry W. Hartsfield.

On its second mission, Discovery became the first spacecraft to retrieve a satellite and bring it home. Through a spectacular series of spacewalks using the free-flying Manned Maneuvering Unit jetpacks, two malfunctioning satellites were retrieved and tucked into Discovery's payload bay for the trip home.

In 1985, Discovery became the only shuttle orbiter to fly four times in a single year. One of those missions, STS-51D, counted the first sitting member of Congress among its crew, Utah Senator Jake Garn.

After more than a two and a half year hiatus to add safety improvements throughout the shuttle systems following the January 1986 Challenger accident, Discovery took America back to orbit on mission STS-26 in September 1988. Commanded by astronaut Rick Hauck, the mission tested safety improvements and launched a NASA communications satellite. It was Discovery's seventh flight and the nation's first return to flight. 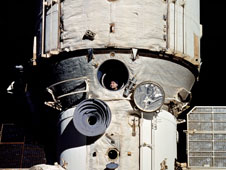 One-time cold war adversaries found common ground above the Earth aboard Discovery in February 1994 on mission STS-60, as Sergei Krikalev of Russia became the first cosmonaut to fly on a U.S. spacecraft. The eight-day research flight was commanded by astronaut Charles F. Bolden, Jr.

Discovery moved the fledgling partnership closer on mission STS-63 one year later as it became the first shuttle to rendezvous with the Russian Mir Space Station. As Discovery flew to within 40 feet of the orbiting complex, the mission broke other barriers as well. Commanded by astronaut James D. Wetherbee, the crew included the first female to pilot a U.S. spacecraft -- astronaut Eileen Collins.

Discovery's only other visit to Mir came on mission STS-91 in June 1998, a docking with the space station that ended the Shuttle-Mir Program. The cooperative effort had seen nine shuttle missions dock to the Russian station since Discovery's trailblazing rendezvous in 1995. 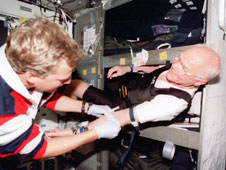 In October 1998, Discovery flew a science mission that again broke barriers on Earth and in space. The crew included the oldest astronaut to fly to space -- astronaut John Glenn, who at age 77 made his second trip to orbit on Discovery's STS-95 mission. In 1962, Glenn became the first American to orbit Earth. In addition to other duties with the STS-95 crew, Glenn was a test subject for a host of experiments that studied aging.

In October 2000, Discovery launched on the 100th mission of the Space Shuttle Program, a flight to the new and growing International Space Station on mission STS-92. The 12-day mission installed a shuttle docking port on the station and the first piece of the station's exterior truss structure, setting the stage for the arrival of its first resident crew only a few weeks later.

In February 2003, the world again mourned as the shuttle Columbia and her crew were lost during reentry. America resolved to continue the shuttle program and again improve the safety of flight, and NASA again turned to Discovery to return the nation to space on mission STS-114 to the International Space Station. The mission, commanded by Eileen Collins, included new procedures to ensure the shuttle heat shield was in good condition for the trip home, among them a first of its kind "back flip" as Discovery approached the station to enable the station crew to capture high resolution imagery of the shuttle's heat shield. 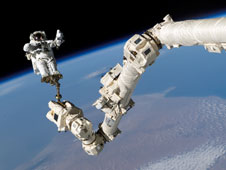 NASA's final mission of 2006 was expected to be one of its most challenging. Discovery's STS-116 mission to the space station called for installation of the port five truss segment and a major overhaul of the station's electrical power system. Problems arose while retracting one of the station's solar arrays, which was to be relocated on a future flight. During the retraction, the array snagged. During two spacewalks, astronauts Bob Curbeam, Suni Williams and Christer Fuglesang assisted in the retraction by hand, successfully troubleshooting the problem and folding the array.

Discovery participated in another space milestone in October 2007 as mission STS-120 marked the first time that two female commanders were in space together. Discovery Commander Pam Melroy flew the shuttle to dock with the space station, which was under the command of astronaut Peggy Whitson. The mission installed the Harmony module on the complex and relocated and deployed the solar array that had been folded on STS-116. The crew and ground had to improvise as the array was unfolded, installing straps that mended and stabilized the panel.

On STS-124 in May 2008, Discovery headed back to the station to deliver the centerpiece of the Japan Aerospace Exploration Agency's Kibo experiment laboratory. STS-124 was the second of three shuttle flights that delivered the elements to complete the Japanese lab.

On its final flight, Discovery will deliver a final module to the U.S. segment of the station, the Leonardo Permanent Multipurpose Module, as well as the first humanoid robot to fly in space, Robonaut2. The new module will be a storeroom and provide additional research space. Robonaut2 is a technology demonstration to learn how humanoid robots can assist crews in orbit. Discovery also will carry a host of spare equipment to be stored aboard the complex. Befitting the milestones that have punctuated Discovery's career, its final visit to the station will coincide with the 10-year anniversary of a permanent human presence aboard the outpost.
› Back To Top