Part Office, Part Sanctuary, All Crew Quarters
The list of guests who have stayed at the Astronaut Crew Quarters is a who's who of spaceflight.

A few of the notables include Neil Armstrong, Sally Ride, John Young, Robert Crippen and Eileen Collins. John Glenn slept in the Hangar S quarters at Cape Canaveral Air Force Station before his 1962 launch, and stayed in the modern crew quarters before his STS-95 mission in 1998. 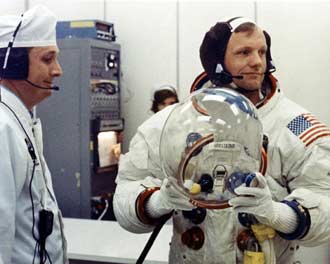 Image right: A technician helps Neil Armstrong put on his spacesuit in Astronaut Crew Quarters before the launch of Apollo 11 to the moon. Photo credit: NASA/KSC

Astronaut Jerry Ross slept in the dorm-style accommodations before each of his record seven space shuttle missions.

Tucked inside the Operations and Checkout Building at NASA's Kennedy Space Center in Florida, the Astronaut Crew Quarters looks like a hotel floor, is serviced by an eager and exacting staff and includes conference rooms like a business center.

It has these amenities because the astronauts who stay there are critical to the mission and there are strict requirements to keep them quarantined from potential infections.

For crew members staying in the living area, the accommodations offer something between a chance to brush up on last-minute changes and an opportunity to take stock of life and career.

"Each crew member sees it from a different perspective," Ross said. "Everyone uses it differently."

Mostly, though, it's a chance to relax after more than a year-and-a-half of intense mission training. The two-week flights are crammed with enough work to test every crew member.

"It's a way to recharge before launch," astronaut Randy Bresnik said. "It's like going home for Christmas. Great food, it's fun, then you have to go back to work." 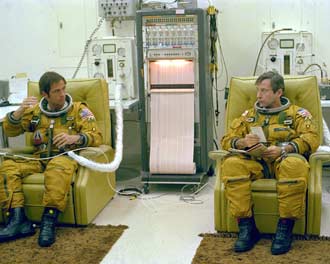 The 23 bedrooms are roughly identical and outfitted with a bed, wardrobe, television and bathroom. The astronauts live there when they travel to Kennedy Space Center from Houston.

Walls covered with mission patches and crew photos enhance the feeling of a fraternity retreat.

There's a large pair of bulletin boards with photos of astronauts' children, some showing off homemade cardboard space shuttles and many infants clutching a mission emblem close.

"That way, they can see their families -- you know, make them feel at home," said Lauren Lunde, a flight crew support specialist who manages the site.

Since its beginning during the Gemini days, the crew quarters was meant to be as accommodating for astronauts as possible, with the understanding that engineers, technicians and doctors could not replace immediate family.

A staff of five takes care of the area and its visitors.

"I treat them like they're my children," said Delores Abraham, who worked in the crew quarters for five years. "I always told them they were my boys and girls."

Even today, family members are not permitted to stay in the crew quarters and visits are limited to a couple of hours, provided the guest does not have any illness that could keep the astronauts from making their flight.

Eight of the bedrooms are clustered at one end of the floor for the prime crew and the flight surgeon. Along with a couple conference rooms, the prime crew members can be sequestered from the rest of the floor to quarantine them leading up to launch.

That means the limited access to the floor gets even more restrictive, and only a relatively few staffers who have passed physicals can meet the crew members face to face. Anyone can be kept away if they show signs of illness that could infect the crew and delay a mission.

The quarters are considerably more spacious than during the early days of the space program. Gemini 3 astronauts Gus Grissom and John Young were the first to use the crew quarters at the Operations and Checkout Building in 1965. They stayed there overnight, but drove to a trailer near the Gemini launch pad at Cape Canaveral Air Force Station to suit up for the flight.

The crew quarters was modified or expanded several times. When John Young and Robert Crippen stayed in the facility before the first launch of Space Shuttle Columbia in April 1981, the area had 14 bedrooms for crew members. Bathrooms were also shared by two or three astronauts.
"That didn't work real well when we got six- or seven-man crews," Lunde said. The shuttle was also the first American spacecraft to carry women into orbit, which was another incentive to attach a bathroom to each bedroom. The additional nine bedrooms were added when McDonnell Douglas closed its offices on the floor. 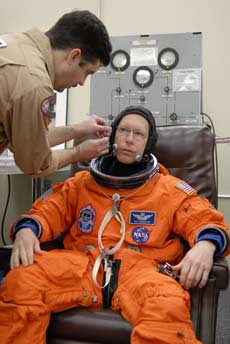 The five people who take care of the facility on regular days switch almost exclusively to cleaning roles when the prime crew moves in for launch. The bathrooms are tiled the full height of the walls and all the surfaces are made to be sanitized so the cleaning crews can work each day. They also disinfect every surface in the bedrooms, from clock radio to TV to telephone and replace the sheets, all in the interest of warding off germs.

For crew members in quarantine, there is a small gymnasium and one of the conference rooms is stocked with DVD movies and a projection TV. Yes, the library includes "Apollo 13."

The gym includes a pair of mountain bikes for astronauts to pedal around the center.

The crew quarters staff also kicks in with some camaraderie, usually playing games with the crews, especially after a launch delay.

The days leading up to launch also give a workout to the three medical exam rooms near the prime crew's bedrooms.

Although the aim of the facility is to provide a home away from home and a chance to relax immediately before launch, several areas are uniquely outfitted to ready a crew for space.

Through one set of locked doors is the suit-up room, with its panels of pressure gauges and two rows of brown recliners. On launch day or during the countdown dress rehearsals, a small army of technicians helps the astronauts into orange pressure suits.

This is the same room that hosted the Apollo crews as they dressed to head off to the moon.

It is also one section of the expansive area that has been seen by the public, at least on television. Most of the rest of the section is strictly off limits.

The other exception is the dining room, particularly the table where the crew members gather around a mission emblem before putting on their spacesuits.

"I try to provide as close to a home atmosphere as I can get," he explained.

He said he still wishes he were climbing in the orbiter come launch day.

"I keep trying to sneak on board, but they keep catching me," he said.