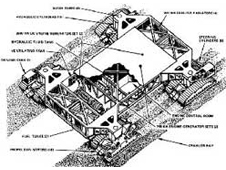 Image above: Pictured is a schematic of the crawler's design. Image credit: NASA
› View larger image 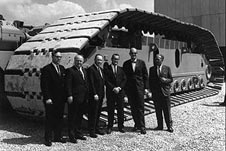 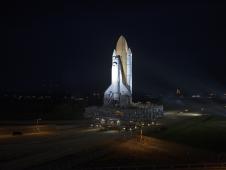 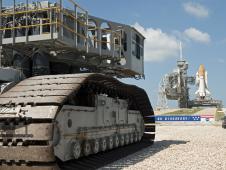 Image above: The crawler-transporter that carried space shuttle Discovery on its last rollout from the Vehicle Assembly Building to Launch Pad 39A moves toward the pad perimeter gate. Image credit: NASA/Jim Grossmann
› View larger image


For more than 40 years, the twin crawler-transporters at NASA's Kennedy Space Center have traveled the gravel track between the massive Vehicle Assembly Building and the two launch pads at Launch Complex 39. These mammoth beasts that first carried all the Apollo Saturn V rockets have since borne every space shuttle on the last Earth-bound leg of their journeys to space.

The technology used to build the huge, reliable crawlers capable of such Herculean tasks was deeply rooted in a region where giant machines excavated and extracted veins of coal. That technology helped the Marion Power Shovel Company of Marion, Ohio, win the contract to build the behemoths that would transport the moon-bound Apollo Saturn V rockets to their seaside launch pad.

Philip Koehring spent his life working for the companies that build these mechanical giants, and in the early 1960s, much of the burden of adapting this engineering know-how to NASA's needs fell on his shoulders.

"This was a machine that was built to last," said Phil Koehring, son of the crawlers' engineering designer, in marking the vehicle's 40th anniversary. "There were a lot of naysayers about this program in the early days, and all I can say is, 'We've shown them!'"

Adapting the sturdy technology to Space-Age needs brought many challenges. As with any major undertaking that is the first of its kind, the project hit a few snags along the way.

Following a July 1965 test at Kennedy, pieces of bronze and steel were found on the crawlerway's surface. It was determined the crawler's support bearings – about the size of frozen orange juice cans – could not handle the loads exerted during turns.

Koehring recalled his father's return from that trip to Florida. "I remember him coming back late one night from a trip carrying a small, canvas bag of bearing bits. I remember actually holding some of those in my hand. Not his happiest time."

The problems were replaced with pride as the two crawlers went into service, but it's doubtful that the crawlers' designers could ever have imagined their creation would still be moving launch vehicles into the 21st century as the Space Shuttle Program draws to a close.

"When they built the crawler, they overbuilt it, and that's a great thing because it's able to last all these years. I think it's a great machine that could last another 50 years if it needed to," says Bob Myers, who serves as system engineer for the crawler today.

Even though Myers began working on the crawler in 1983, its ability still amazes him. "It's capable of moving a shuttle and all of its parts and the mobile launcher platform. I mean, we're talking about 12 million pounds, the vehicle itself being 6 million. You have about 18 million pounds rolling down the road."

The critical nature of the long rollout to the launch pad is not lost on crawler manager Ray Trapp. "Probably other than launch and landing, one of the most critical times for the vehicle is between the VAB and the pad," explains Trapp. "There's no weather protection, there's no lightning protection, so it's very important that all of our systems function properly and safely from the time we leave the safety of the Vehicle Assembly Building until we get out to the launch pad. During that six hours or so while we're out on the crawlerway, it's my team and the crawler getting the vehicle out to the pad, and it's a critical time."

So with all that weight in motion, what's it like to drive a crawler? "One of the things about driving the crawler is you have to plan ahead, because obviously it doesn't turn on a dime," says Trapp. "So you have to really be on your game and be thinking ahead about where you want to be, one, two, three minutes ahead of time."

"The crawler is like a locomotive. It's diesel-electric -- there's two diesel engines, which produce DC current -- which is what makes us move," he explains. "The steering and the jacking and elevation of the crawler, the chassis and the mobile launcher, it's all done by hydraulics. All of that basically is drive-by-wire, so there's a steering wheel in the cab."

And while soon there will be no more shuttles to ferry to the launch pad, the trusty crawlers seem fully capable of moving future launch vehicles. "Seeing the shuttle program come to an end really will be a sad day for us, no doubt about it. The crawler actually has gone through Apollo and Shuttle, so it's been around a long time. We'd like to see it carry on to another program," says Myers. "The crawler's ready to go. It can take on whatever you throw at it."

Learn more about the space shuttle's rollout to the launch pad aboard the crawler.