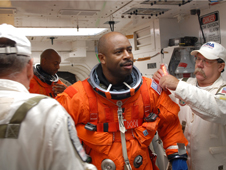 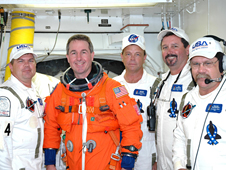 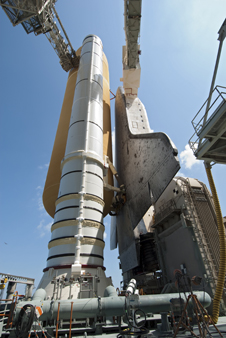 Image above: High above the surface of Launch Pad 39A, the orbiter access arm extends the White Room to Discovery's side.
› View Larger Image

Although he's not an astronaut, René Arriëns knows the surreal environment that greets space shuttle astronauts arriving at the launch pad before liftoff.

A fully fueled shuttle looms high above the mobile launcher platform. Strange sound effects drift from the launch pad's metal structure as it reacts to changing temperatures, caused by more than 500,000 gallons of super-cold propellants in the shuttle's massive external fuel tank. Upstairs, a shroud of cool mist hovers above the "yellow brick road," the egress route painted on the walkway of the 195-foot level, where the astronauts climb aboard the shuttle.

As a Closeout Crew member with United Space Alliance (USA) at NASA's Kennedy Space Center in Florida, Arriëns and his teammates are the last people shuttle astronauts see before they leave Earth.

On launch day, the seven members of the Closeout Crew help the astronauts strap into the shuttle's crew module and take care of any other last-minute needs that arise. Ultimately, they close and seal the crew access hatch and leave the astronauts behind.

This elite team comprises two USA suit technicians from Johnson Space Center in Houston, along with an astronaut support person, an active astronaut who is not on the flight crew. There are three additional USA employees from Kennedy as well as a NASA quality inspector.

The Closeout Crew's work begins long before the day of liftoff. As a spacecraft technician and operator, the busiest time begins when the orbiter is mated to the external tank and twin solid rocket boosters, and the pace picks up when the assembly reaches the launch pad.

"When there's a shuttle on the pad, the orbiter forward crew module is my work area," Arriëns explains.

The Closeout Crew spends so much time at the pad that the pad structure, various pad facilities that support the orbiter, and even the orbiter itself become intimately familiar. This expert knowledge serves the team well when launch day arrives.

They gather about three hours before they're due at the launch site to prepare their emergency air rescue packs and make sure their communications equipment is working properly. During the T-3 hour built-in hold, they ride to the pad in a van specially equipped to meet virtually any need. After the elevator ride up to the 195-foot level, they arrive in the White Room, the small, environmentally-controlled chamber that provides access to the crew module at the end of the orbiter access arm.

The White Room can only accommodate one or two astronauts at a time during boarding. With assistance, each member of the flight crew dons a parachute pack and crawls through the open hatch and into the shuttle. It's important to make astronauts as comfortable as possible, from keeping them cool inside their bulky suits to braiding their hair to keep it from getting stuck in the suit collar.

Once the crew is safely inside, the orbiter test conductor in the Launch Control Center gives the Closeout Crew a "go" to close the hatch. They'll check the hatch seal for leaks and wait about 20 minutes to ensure the pressure stays at the proper level. Then it's time to retract the White Room from the shuttle's side, leaving the astronauts on their own as the countdown clock marches toward liftoff. The team departs the pad for a fallback area about three miles away, where they listen in on the countdown and watch the launch.

Although some team members have come and gone through the years, the Closeout Crew's unwavering dedication to the job and the astronauts' safety has remained.

"It's one team and one mission, contractor and NASA alike," Arriëns says. "Everybody's focused on getting it right, and flying it right, and doing it right the first time."
Anna Heiney
NASA's John F. Kennedy Space Center
› Back To Top