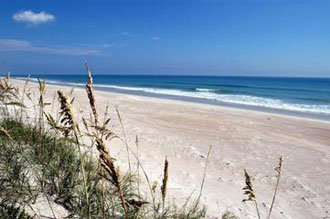 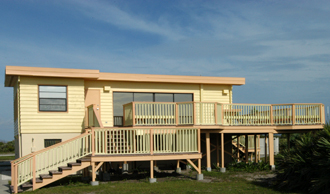 Image above: Known simply as the beach house, the cottage has undergone very little structural change over the years. While receiving some minor hurricane repairs, it was painted and refurnished several years ago. Image credit: NASA 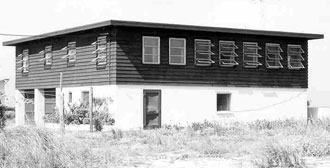 Image above: This undated photo shows the house as it looked when it was purchased in the early 1960s as the Kennedy Space Center expanded along the north side of Cape Canaveral. Image credit: NASA 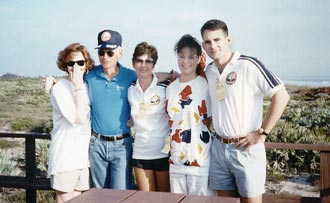 Image above: Three-time shuttle astronaut Mike Mullane spends some preflight time at the beach house with his wife, Donna (center), and their three children. Image credit: Mike and Donna Mullane 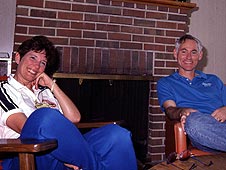 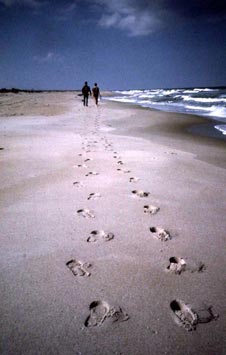 Image above: Like other astronauts and their spouses, the Mullanes walked the seemingly endless beach during their prelaunch farewell. Image credit: Mike and Donna Mullane 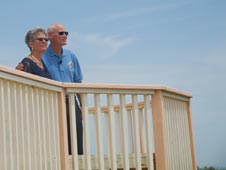 If you listen carefully, you can almost hear the voices of yesterday's space travelers echoing across time as they mingle with the sound of the surf breaking on this secluded beach at NASA's Kennedy Space Center in Florida.

This salty air has been filled with the laughter, whispers, and even tears of the men and women who've passed through this shore's humble beach cottage before soaring off the planet into the vastness of space.

"I don't know who the far-thinking person was that preserved this house from destruction ... but thank you. I'm sure they could not have imagined how this would be part of manned space flight history."
Mike Mullane, three-time shuttle astronaut.

"This is sacred sand out here, it really is," says Mike Mullane, three-time shuttle astronaut. "It's where people have made those final goodbyes, and some were final. There's no spouse, no astronaut walks that sand that doesn't know, that there is a possibility that this is forever. "

"As a spouse, you know you're coming out here to say goodbye, and you don't know if it's the last time," echoes Mullane's wife, Donna.

The cottage always has been simply "the beach house" to generations of astronauts and their families. For years it's been their quiet, unassuming preflight retreat where they have reflected as they stood on the threshold of their dream: space travel.

"Before the first mission, to sit out here and look at the sky and say, 'I'm next! I'm next! It's going to happen! I'm going to go into space!' That would just overwhelm me," says Mullane.

The cozy house sits perched above the dunes at the edge of a pristine beach that stretches undisturbed as far as the eye can see. Its nearest neighbors are launch complexes.

"What history of these people who have walked through this beach house, who have walked on that beach out there in the shadows of the rockets they were launching on tomorrow. What incredible history," reflects Mullane. "And to be part of it, I felt totally overwhelmed by that reality. That I was now part of it . . . that I was walking the beach in the shadow of the rocket that I was going to be riding."

"It's a thing for people to understand. At the same time you are boundlessly joyful, you're also fearful," he explains. "That's hard to get your mind around that. But it is. That's the reality of an astronaut's life, and a spouse's life, in those final days and hours before a mission. Fear and joy overwhelming you." Adds Donna, "And it's exhausting!"

The expanses of sea and sky make it a fitting place for astronauts and their loved ones to spend their last preflight visit.

"The beach house is a great place to come to get away from all the distractions of the mission. Come out here, be with your family, kind of relax... in an environment that's just as non-stressful as possible."

But the effect of even the best setting has its limitations. Saying goodbye before a space flight "never got easier, and it never will," Mullane says. "If I flew a hundred times, it would never be easy."

"It was quite emotional when everybody leaves," remembers Donna. "You're by yourself and you see each of the couples of the crew going off in different directions, knowing that it's a private moment and they are dealing with their own anxiety in their way."

And while it was his dream to fly in space, Mullane credits much of his success in achieving that dream to the support of his wife. Their long-distance courtship flourished during his West Point career. After getting engaged by mail, they married a week after his graduation in 1967.

"There's no question that this woman had a significant role in making my dream come true," he says of his wife of 43 years. " I really attribute a lot to her being by my side. And she paid for it. It's tough on spouses to be part of living a dream. It may not be their dream . . . it probably isn't their dream. They couldn’t have ever foreseen that standing at the altar. And they pay for it along the way with a lot of stress."

Much of that stress culminates in the final days before launch. That's why the beach house holds significance that far outweighs its physical presence.

Structurally, the two-story, wood-frame and concrete block house never really outgrew its humble, early 1960s beginnings as part of the oceanfront Neptune Beach subdivision. The development and its land were bought in 1963 (for the grand sum of $31,500) to accommodate the expansion of what would become NASA's Kennedy Space Center. The cottage was somehow spared the fate of the nearby residences and a store and gas station.

"I don't know who the far-thinking person was that preserved this house from destruction -- there were other houses here when this was private property -- but thank you. I'm sure they could not have imagined how this would be part of manned space flight history," says Mullane, as Donna adds, "It's so important, this place. I mean it really, really is."

In earlier days, the astronauts could actually stay overnight, and it was dubbed the Astronaut Training and Rehabilitation Building. But it has long since lost its function as a residence with subsequent renovations. The quarters now resemble living rooms and a conference area, which are used for meetings when no astronauts are in town preparing for a mission. Few mementos remain from the early space pioneers who passed through its doors, but even after several renovations the small structure retains the same low-key profile.

In those days long gone by, the house also served as the setting where visiting dignitaries were treated to some "old Florida" cuisine consisting of grilled feral hogs (caught and cooked by the local trapper), swamp cabbage and alligator tails.

But its significant contribution, not only to the shuttle program astronauts, but to the whole history of the U.S. human spaceflight program, comes from giving the space travelers their prelaunch time alone with their families.

"I think it's important for people to understand is that it's a dangerous business. You know there is a possibility that something bad can happen and you can die," says Mullane. "And the spouses know that, and so that makes it a very stressful, stressful moment for everybody, knowing that these goodbyes could be forever, as they were for Challenger and for Columbia."

And now, just as in years past, the little house by the sea stands ready to welcome the final shuttle crews and their families. Then, once again, the traditional preflight barbecues will give way to quiet walks on the beach, as they add the final shuttle-era chapters to this little-known corner of space history.