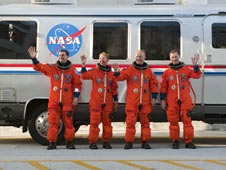 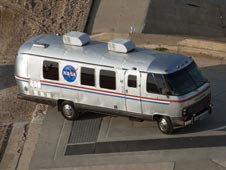 Seen from an upper level of Launch Pad 39A at NASA's Kennedy Space Center in Florida, the Astrovan transports the STS-135 astronauts to the pad to participate in a launch countdown simulation exercise. Image credit: NASA/Jim Grossmann
› View larger image 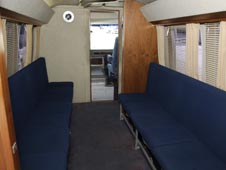 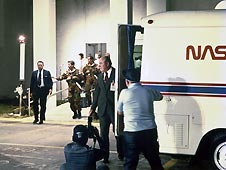 The sight of the Astrovan's shiny silver exterior and bold NASA emblem evoked pride and excitement in those who watched it wind its way toward the launch pad at NASA's Kennedy Space Center in Florida. Before each space shuttle launch, astronauts smiled and waved as they boarded the van that carried them to meet their fully fueled ride to space.

"The first time, everything about it is just the anticipation, excitement," says STS-135 Pilot Doug Hurley. "You're a little bit nervous, but it's just neat to know that you're one in a series of a very long line of astronauts who rode in this vehicle going to the pad for flight to space. It's pretty cool."

Since 1984, each shuttle crew has traveled those nine miles, from their crew quarters to the launch pad, aboard the same vehicle. A modified Airstream motor home, the "Astrovan" as it is called has only racked up about 26,500 miles in its 27 years of service. That's because it was solely used to transport the astronauts on three occasions: to the launch pad for launch dress rehearsal, on launch day and after landing.

"I always associate this vehicle with flying," says STS-135 Commander Chris Ferguson, "because you get in here for TCDT, which, of course, is the launch rehearsal, and then launch day."

The earlier shuttle flights had fewer crew members, so they used the Apollo-era astronaut transport van that now can be seen on display at the Kennedy Space Center Visitor Complex's Apollo/Saturn V Center.

The current vehicle's appeal is rooted in its tradition rather than its décor. Dark-gold drapes frame the windows and dark-wood paneling lines the walls. The interior's narrow-center aisle is paralleled by long benches that sport dark-blue upholstery.

"It's not really extravagant," says Ferguson. "It's pretty crowded on launch day, especially with a crew of seven."

The seats are equipped with lift-out sections to accommodate the ventilator units used to circulate cool air through the astronauts' bulky orange launch-and-entry suits.

"This is the only place that they have liquid air. And liquid air is really, really good. We have this cooling garment that circulates water cooling and in the hot Florida sun it's nice to have it," explains Ferguson. "But they plug that liquid air into you and it just blows this cool air throughout your suit, and it's really nice because it actually dries you. It's like a special treat on launch day."

Employed by space shuttle contractor United Space Alliance, Astrovan driver Ronnie King is one of five drivers called upon to pilot the vehicle. On shuttle launch day, the Astrovan was the centerpiece of a motorcade. Escorted by security as it traveled toward the seaside launch pad, they stayed in constant communication with the NASA test director via radio.

"I would like to keep this tradition," says Hurley. "I don't know if any of us will get to fly on the next U.S. vehicle, whatever that vehicle may be. It would be kind of neat to have some of it be the same."

"Actually traditions are important in a business like this to keep everybody connected at some level," adds STS-135 Mission Specialist Sandy Magnus. "To have something like this continue to be a tradition is really important."

When it comes to launch day "they have their game faces on," King says of the crew members. "This is serious business."

"I think everyone's trying to cut the tension with a joke or two from time to time," observes Ferguson, reflecting on his own trips to the pad aboard the Astrovan.

When the last space shuttle launch day dawned on July 8, 2011, Ferguson and his STS-135 crew made their way to the familiar shining silver van as they prepared to write the final pages of this chapter of space history.

"It was really special this time because there were so many people here. On this particular day, the last flight, I think we were all amazed at how many people showed up," says Ferguson. "The road was lined with people waving American flags. It made me feel good to know that the shuttle program meant this much to so many people."