Piloted by astronauts Fred Haise and Gordon Fullerton, the prototype space shuttle enterprise settles toward the main runway at Edwards Air Force Base on its final Approach and Landing Test flight on Oct. 26, 1977 (NASA photo)

(Editor's Note: NASA's Dryden Flight Research Center at Edwards Air Force Base in Southern California's high desert played a significant role in the space shuttle's development. As the Space Shuttle Program nears its conclusion, we are publishing a series of historical retrospectives that explore some of the center's contributions to the shuttle's design, development and flight validation. In this second article, Dryden historian Peter Merlin details the Approach and Landing Tests in 1977 that evaluated the shuttle orbiter’s aerodynamic flight control systems and subsonic handling characteristics.) 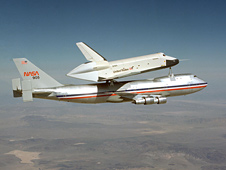 The space shuttle prototype Enterprise rides atop NASA's Shuttle Carrier Aircraft 905 during the first of the shuttle program's Approach and Landing Tests at NASA Dryden in February 1977. (NASA photo) The space shuttle orbiter was the first spacecraft designed with the aerodynamic characteristics and in-atmosphere handling qualities of a conventional airplane. In order to evaluate the orbiter’s aerodynamic flight control systems and subsonic handling characteristics, NASA Dryden Flight Research Center undertook a series of flight tests, known as the Approach and Landing Test program, at Edwards Air Force Base, Calif., in 1977.

A full-scale orbiter prototype, named Enterprise, was built for the program. Because the vehicle would not be subjected to re-entry heating, Enterprise had no need for a thermal protection system. It was not covered with the space shuttle’s reusable surface insulation, but with substitute materials, primarily polyurethane foam and fiberglass. The flight deck had two crew stations for the commander and pilot.

Aerodynamic controls included a body flap at the aft end, elevons and a split rudder that doubled as a speed brake. Reaction control systems, unnecessary at low altitude, were not installed. For the captive flights and the first three free flights, an aerodynamic fairing covered the orbiter’s aft end. Three dummy main engines were installed for the final two flights to simulate weight and aerodynamic characteristics of an operational orbiter. 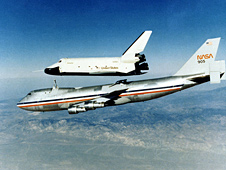 Without the aerodynamic tailcone over its dummy engine nozzles, the space shuttle prototype Enterprise rises from NASA's 747 Shuttle Carrier Aircraft to begin a powerless glide on its fourth of the five free flights in the Approach and Landing Tests on Oct. 12, 1977. (NASA photo) The Enterprise was to be carried aloft by, and eventually released for flight from, a modified Boeing 747. This Shuttle Carrier Aircraft or SCA, as it came to be known, had a fuselage strengthened at key stress points, two vertical fins attached to the horizontal stabilizers, and three attach points on top of the fuselage to anchor the orbiter. All original seating and interior trim except that of the first class section of the main deck was removed to reduce weight.

Wind-tunnel-model tests allayed concerns over the separation characteristics of the two vehicles in flight. Because of the orbiter’s positive angle of attack while mated to the 747, the Enterprise tended to lift or climb relative to the SCA. Meanwhile, the 747 began to descend as the crew idled the engines and deployed lift spoilers, allowing the orbiter to clear the SCA’s tail in about 1.5 seconds.

Five captive flights with the inert, unmanned shuttle orbiter verified the airworthiness of the 747 as a transport vehicle for the shuttle and established an operational flight envelope for Approach and Landing Test operations. These were followed by three captive-active flights, with Enterprise powered up and crew in its cockpit to test controls and other functions. 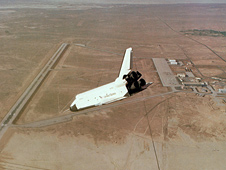 The space shuttle prototype Enterprise dives toward the runway on Rogers Dry Lake at Edwards Air Force Base after being released from NASA's 747 Shuttle Carrier Aircraft on its fourth of the five free flights in the Approach and Landing Tests on Oct. 12, 1977. (NASA photo) The final phase of the ALT program comprised five free flights in which the orbiter was released from the SCA and glided to a landing at Edwards. Three of these were made with the aerodynamic tailcone on the orbiter, but the last two were made with the tailcone replaced by dummy engines in an effort to replicate actual flight conditions that would be experienced by a shuttle orbiter returning from space. Except for the last free flight, Enterprise landed on runways laid out on the vast expanse of Rogers Dry Lake.

The final flight, however, ended on the 15,000-foot concrete runway at Edwards, an important demonstration of precision landing capabilities necessary for later operational missions. At touchdown, the orbiter experienced a pilot-induced oscillation, or PIO, in which the vehicle skipped and bounced down the runway several times before settling down and safely coming to a stop.

Prior to the start of the shuttle’s orbital flight-test program, the PIO issue was corrected through additional research with Dryden’s F-8 Digital Fly-By-Wire test bed aircraft, which was equipped with an IBM AP-101 flight control computer identical to that used on the orbiter. Dryden engineers recreated the oscillation problem with the F-8 and developed a software filter to correct for it.

The Approach and Landing Test program demonstrated the orbiter’s capability for safe approach and landing after an orbital flight from space. It also validated crucial onboard control systems necessary for the shuttle program’s next step: the launch of Columbia on the first shuttle mission into space on April 12, 1981.